Lately there's been a lot of changes in my life, so running has been somewhat lower of a priority than usual.  I was feeling a bit nervous about the double marathon I've got looming, as I worried I hadn't been doing enough training, but still wasn't feeling motivated to go and run up hills on my own.  Iz was away over the Bank Holiday so I started googling for marathons.  Lo and behold, I found this one in Surrey, conveniently with a day off work either side, so I decided last minute that I would go and do it.  I arranged to stay with my parents either side to break up the journey.

I drove down to Milton Keynes on Saturday morning (3 hours), then on to Surrey Sunday morning (2.5 hours), then back from Surrey to Milton Keynes Sunday afternoon (2 hours) then back to Liverpool on Monday morning (3.5 hours).  The main thing I've found since I started doing my marathons solo is the driving is a killer.  I am not a great driver, I don't enjoy it, and more than 2 hours is a lot, especially on consecutive days and/or after a marathon.  Yuk.

This marathon also started with my GPS going haywire so I had to pull off the M25 and call my parents for verbal instructions to my destination.  Cue my mum, saying "You need the A22... oh hang on, it says the A25 here... well one of those anyway, going towards Godstone, then you get on Flower Lane, then Quarry Road" whilst I drove round in circles in the countryside panicking with 23 minutes to go before the race started.

The last time I had such a panicky start was Worcestershire when I lost track of the time and screeched into the car park with minutes to spare! Oh god.  Unfortunately I see more of this in my future...

ANYWAY.  I got there (thanks Mum!) and it was all so low key I even had time for a pre-race photo.  The race started outside a private school which was Very Surrey: 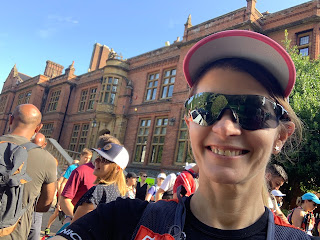 I also spotted someone I knew from London, Sarah, who'd come down to do the half.  She is one of the organisers of Love Trails festival, which I've already signed up for next year.  We had a quick catch up which was lovely - it's always nice to see a friendly face at far away races.

The first mile or two was along the drive leading out of the school.  The runners were still all clustered together and it was clearly going to be a warm day: 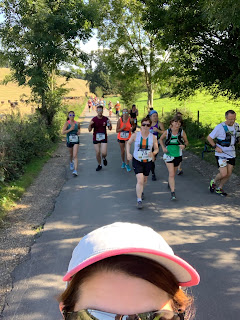 The race was two loops of the half marathon course and I knew it was pretty hilly.  I was initially a bit nervous because there was no GPX but as long as I didn't get lost on my first loop, I would be able to follow the trail on my Garmin.  A man in the car park had said he got lost last year a couple of times because the course wasn't very well marked, which made me even more nervous, but I needn't have worried.  There were enough people around on the first loop and the course was better marked than I expected so I didn't get lost after all. Phew!

Due to the lack of GPX, I also didn't know how much elevation there was but I knew it would be 'hilly' which was what I wanted in order to train for Dorset in a couple of weeks.  Lo and behold, there were very quickly a hill: 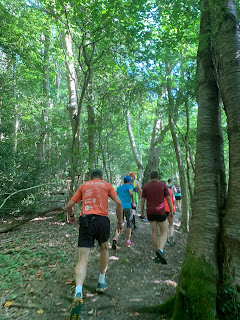 Followed by another hill: 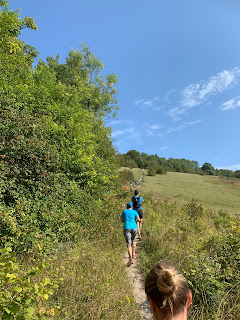 Followed by another hill! 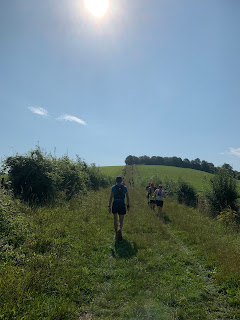 The middle one might not look that steep but it was certainly a good climb and the views were stunning.  This section was an out-and-back, presumably included to get the race up to the required distance whilst still being a loop overall.  It was great as you see everyone in the race.  Sarah passed me and I think she was second place female, looking strong, and I wondered if she might manage to overtake the other girl as she still had another 6 miles or so to go. She must've been comfortable as she was able to shout 'well done Alice' as she ran past me, what a star!

There was an aid station at the far end of the out-and-back, with some very cheerful volunteers and some very welcome Coke.  I do love a race that provides real Coke!

This was the view as I returned to the second hill, this time descending it: 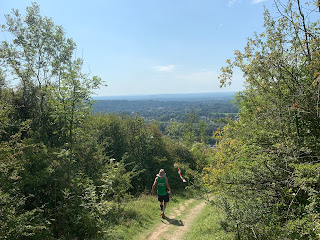 And this one was taken at the bottom of that hill by the official photographer: 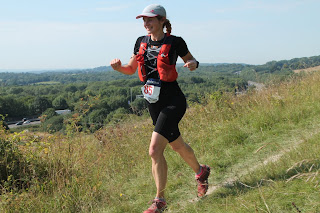 There was a fair amount of tree cover on this race, which was good as I'd forgotten to put any suncream on (in my defence it wasn't very sunny when I left Milton Keynes!)  but it was definitely sunny now. 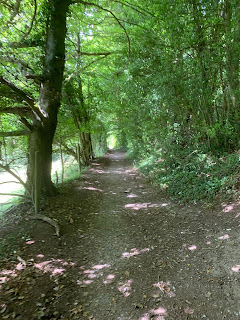 There was a long, boring road section towards the end of the first loop, and I could feel a blister starting so I stopped to sort it out.  I sat down on a grass verge and faffed with tape and Compeed for five minutes, which helped a bit.  I was wearing trail shoes but there was a surprisingly large amount of pavement and on a hot day that can cause rubbing/chafing leading to blisters.  Annoying. 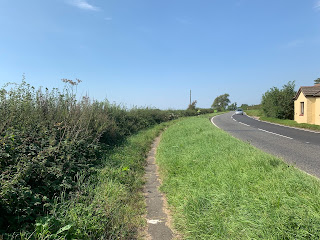 I arrived back at the midpoint and briefly saw Sarah wearing her medal (I didn't find out until later that she was first female in the half, in an amazing time of 1:57).  Well done you legend!!

I had brought along some cold salted new potatoes, cooked by my mum yesterday,  and ate them joyfully here: 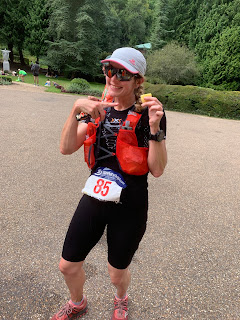 I then set off for loop number two: more of the same!  Somehow on two loop marathons, I always feel happier at the start of the second loop because I know what I've got to do and I'm almost counting down from this point - each difficult hill is the last time you are going to do that hill, each mile ticked off is closer and closer to finishing.  Psychologically I really like double loops - I enjoyed Shropshire for the same reason.

More beautiful views (these were taken from the top of the first hill - it was much quieter on the second loop as all the half marathoners had finished): 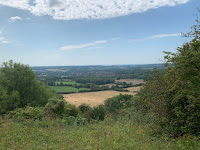 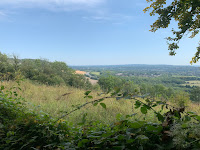 Running down the hill to the friendly aid station: 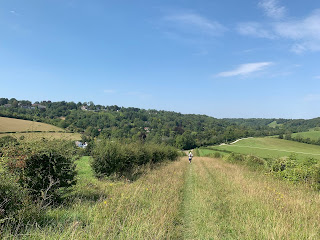 At the aid station, I got chatting to a tall guy about how warm/challenging today was and he mentioned he'd recently been running in Scotland (where it'd been cold) and was going to Croatia for a marathon in a couple of weeks.  When I caught up with him, I asked about this and it turned out he's running the Istrian Wine Marathon (like Medoc).  On further questionning, he was going with David Hellard (of Caffeine Bullet/Bad Boy Running podcast fame) - I knew about this trip as I'm on the mailing list but as I only did Medoc last year it was a bit early for another wine marathon.  I said so and the man - Brent  - told me he'd done Medoc multiple times.  We continued to chat on and off - sometimes getting ahead or behind of each other and then catching up again over the next five miles.

As we reached the bottom of the penultimate hill, we came across some slower runners who were just starting up the hill towards the aid station.  A couple of women and then a man, all struggling with the lack of water available.  The day was boiling hot by this time - I had refilled my water at the aid station and was carrying a litre in my bottles, but less experienced runners perhaps expected more water stations and were struggling.  Later I saw a man being sick in the woods, saying he couldn't keep water onboard even though he was dehydrated - he was resting in the hope of feeling better.  There was a water drop point in the woods, but when I arrived there was very little left - I fear it would have run out before the last runners arrived.  I did notify the next aid station about these things but I am not sure they were rectified - note to race directors - if you run races in summer this is the number one thing you have to get right!


On a lighter note, during one of the middle sections, I saw this sign: 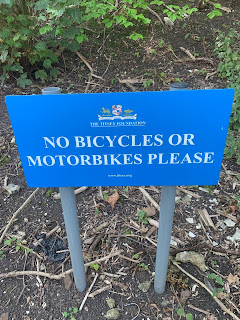 I stopped to take a photo because it really amused me.  How very Surrey!  In Liverpool I feel sure that sign would've just said "NO BIKES".  On closer examination, it even has a Latin phrase on the sign under the crest (!) :
Frangas non electes

I looked it up and it means "Unbowed, Unbroken".  Hahahaha.  You're not in Liverpool any more, Dorothy!  Shortly after this I got talking to a girl who was complaining about the hill, saying it was the hardest hill EVER, an opinion which I absolutely knew to be untrue, and I was backed up by another runner who could also guarantee she'd done worse ones.  I did my usual spiel about how you should try to be grateful for the hills, because at least you can walk them, and they're making you a better runner, and that this hill will make future hills easier, and wouldn't a race with no hills be really boring?  She was unconvinced, I think...

The final Surreyesque part of this race went via a rather lovely golf course: 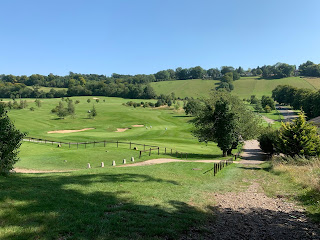 Before the final long road section back to the school.  By this time I was hot, bored, and fed up, the race had already gone over marathon distance (grrr) and my blisters were hurting: 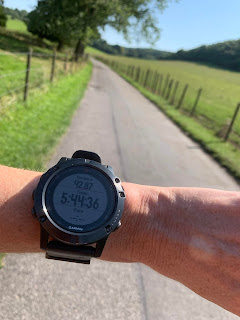 But it was not much further now, and I triumphantly crossed the finish line in just under six hours: 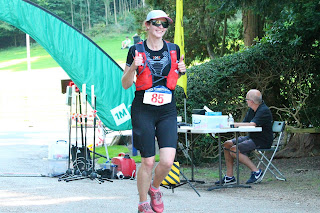 A lovely volunteer gave me a medal (after telling me they thought they'd run out of medals but luckily found another box - I didn't comment but I definitely would've had something to say if there'd been no medal at the end!!!)

I sat down, drank a ridiculous amount of water - I think I had about 3.5 litres today including a litre of electrolytes.  Garmin said the AVERAGE temp was 30 and the max was 35 - ouch!   Hot races don't bother me as much as they used to but my foot was in a state: 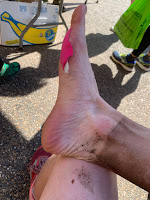 and I was knackered! 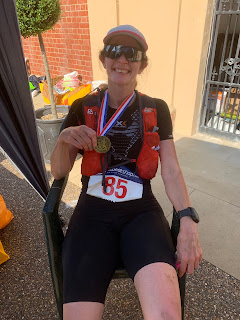 I picked up my goody bag - they had run out of t-shirts in both small AND medium so I didn't bother taking one as it woudn't fit me anyway.  This is also bad as I was nowhere near last - I was 34th out of 64 marathon runners.

Note to Race directors - PLEASE ask people what size they are when they sign up.  Also please give the option of declining a t-shirt to save on waste - I would've just said no and that would've meant one less t-shirt ending up in landfill.

I walked back to my car (in most scenic race car park ever?) and dumped all my stuff, got changed in a very public place (!) and drove back to Milton Keynes - traffic was thankfully very kind so I got back in record time. 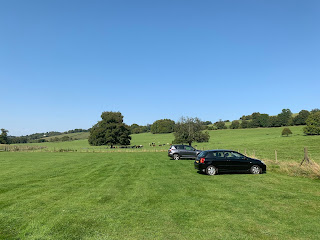 Beastly hills - turned out to be 1000m ascent, definitely decent practice for Dorset!  Legs were sore for a few days after...

Another interesting factoid from the stats was that although my second lap was slower by 26 minutes, I still improved my overall position by 11 places i.e. I overtook 11 marathon runners who had been ahead of me after one lap.  Perhaps obvious, but as I probably do more marathons than most people I think my endurance is slightly above average so I tend to be less tired towards the end.