Richmond was my third marathon, but the first which qualified for my Marathon-in-every-County.  I didn't know this at the time as it was almost a year before I came up with the idea!  (This recap was written in retrospect).

I signed up for Richmond because I thought it would encourage me keep up distance running over the summer after my first two marathons in April 2016.   In actual fact, I didn't do much running that summer as I was walking from London Bridge to Denmark Hill and back five days a week, mostly I just did one long run at weekends.  I'd run parts of the route beforehand so I was familiar with some of it, and I had a brand new Garmin which helped me pace, a luxury I hadn't had at my other marathons.


Race day rolled around and the conditions were utterly perfect.  I caught an early train to Kew Bridge and Ian picked me up and drove me to the start.  I'd decided I was going to race it and go for the sub-4 hour time I hadn't quite been able to manage at my first marathon.  It was a cool day, alternately sunny and overcast but not too warm.  The race began at Kew Gardens and was quite a chilled affair - Ian was able to come right up to the start line to wave me off.  He'd agreed to help me out by appearing at specified locations loaded with jelly babies and cut up Mars bars, and had been warned that I probably wouldn't want to stop. 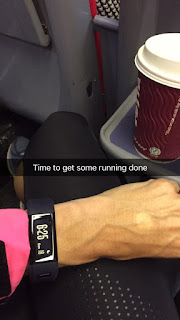 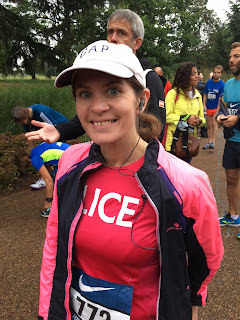 I didn't want to stop.  Almost from the off, I was making great time and felt brilliant.  I remember seeing some people in "100 club" t-shirts when we were still in Kew, and being astonished that anyone could run 100 marathons.   These days, that seems pretty inevitable.  Ha!

After leaving Kew, the race pootles along the Thames all the way to Hampton Court Palace.  The sun was shining, I felt good, and I was making excellent time.  I'd turned around and passed through Kingston before I started to tire.  My goal had been to make every kilometre faster than 5:20 but I noticed that my times were starting to slip.  5:30.  Then 5:45.  I realised I wasn't going to beat 4 hours after all so I slowed down more.  The next time I saw Ian, I stopped and took a paracetamol and had a hug.  Oh well.  I was still having a great day so might as well enjoy myself.  There was a section around here where I was running on grass... in my road shoes... thinking, this is the worst course ever for a PB.  Loose gravel, grass, pavement ... it's got a bit of everything.

The race wandered on, past Teddington Lock, towards Ham House, when suddenly, with 4km to go I realised that perhaps it wasn't too late after all.  I shouted at a passerby, "What time is it?" and they replied, "20 to 12".  I'd started at 9am.  If I could do 4 km in 20 minutes, I could still get that magical PB.  Time to pick up the pace....

Ian had booked us into the Petersham Hotel as a post-race treat, so when the going got tough I could think about lazing in a giant bath drinking champagne.  At one mile before the end, I looked up and saw the hotel above me on Richmond Hill.  From then on, I looked down and just ran as fast as I could.  I remember the half marathon and 10k runners had all joined by that point and I was overtaking them, willing them to get out of my way.  The last km of the race involved running around three sides of a field, my lungs screaming, my watch suggesting that if I just GOT A FREAKING MOVE ON there was still a chance....  finally I saw the finish line and barely made it over the blue mats before stumbling to my knees.  Never done that before or since! 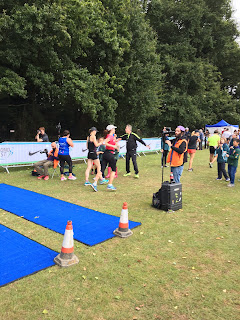 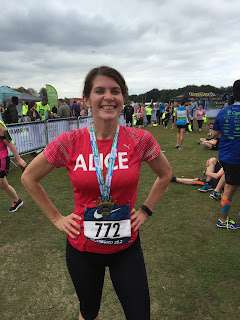 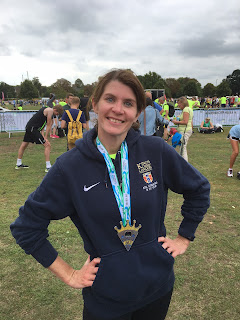 Pictures taken immediately after the finish... 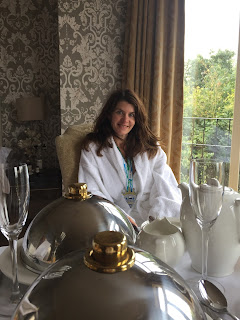 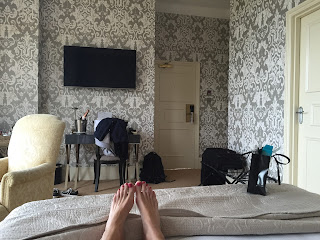 And living it up at the Petersham afterwards...