Today I was meant to be in Somerset running the Mendip Marauder trail ultra (with 4100 feet of ascent).  Unfortunately it was cancelled at the last minute, resulting a desperate search for an alternative race.  Step up the Scorcher 10 in 10, a flat road marathon just outside Preston featuring six 4.37 mile laps of quiet country roads.  Almost the complete opposite of the race I had planned, but on the same day, significantly closer and still had places on Friday.  I was in.

This is the first race I've ever completed solo and unsupported.  I went back and checked...  I have never ever finished a race without someone waiting for me.  Until now.  Go me...

I arrived on time (rare!) and registered.  Whilst I'm filling in my medical form, the volunteer asks the guy behind me for his name... it's Charlie Sharpe!  Charlie is well-known to me via GB Ultras and I hope to go on one of his coached running holidays next year.  We had a nice chat - he was doing the half having done 100k last weekend.

Here's the start line... this is the entire marathon field! I love these small local races - they're always so friendly.  The vibe reminded me of Worcestershire, West Yorkshire, Shropshire... 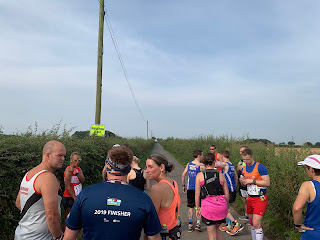 I got chatting to a nice lady called Glenis as we set off and we ran the first lap together.  Unbelievably she's running 31 marathons in 31 days!  Most of these she's just quietly getting on with by herself, whilst still going to work, how awesome is that.  I found her Justgiving page and have sponsored her as this is super impressive - not sure I could do that. Amazing.

As we approached the end of the first lap, we were overtaken by Charlie (who started 10 minutes later than us) and went on to win the half marathon in 1 hour 26 minutes (and that's doing it as a recovery race)!  As he disappeared up the road, I commented that his pace was significantly faster than my 5k pace.

Next on the amazing list was a young lady called Hils who is running the 10 marathons in 10 days.  She'd started early this morning to avoid the worst of the afternoon heat.  I realised when I saw her that I'd met her before - at Hubble Bubble marathon in Leeds last year - and when I re-read through my race report I discovered she was 77 and had run 64 marathons and was hoping to get to 100 before she was 80.  Well she's run at least 73 now - probably more - and it's her 78th birthday tomorrow.  Totally inspiring. 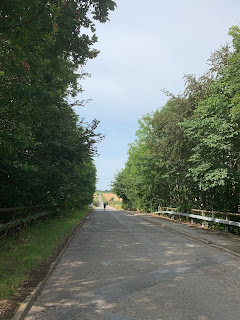 and each section you saw six times.  I actually quite like looped races, as it feels like you're ticking off the miles each time you pass HQ.  Here I am, still looking quite fresh (this must have been early on!) as it later got really very warm.  Garmin says the high was 31 degrees which is entirely believable.  Yet again I didn't wear suncream so have probably topped up my vitamin D levels a bit! 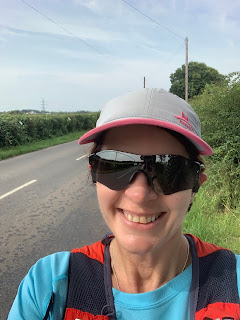 More views from the race.  There were quite a few stinky cow fields en route.  I kept seeing those little floaty white plant seed pods (I googled - they're called cypselae) and trying to grab them so I could make a wish.  Easier said than done whilst running! 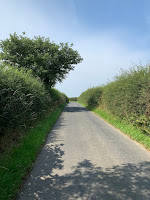 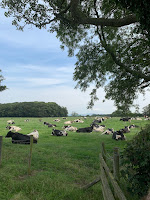 There were a few people doing the 9th of the 10 in 10 marathons today, and the race director announced them all at the start.  This dude was one of them, noticeable due to his "52 in 52 finisher" t-shirt meaning he has already done some epic stuff.  Here he is, disappearing into the distance after LAPPING me on a hill despite having run 8 marathons already this week. Christ on a bike. 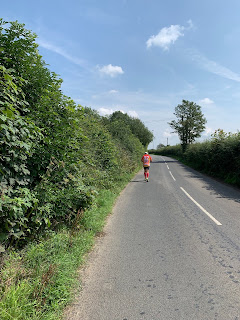 Towards the end of this lap, I spotted a clump of wispy cypselae floating in front of me and managed to grab them.  Realising I'd captured the motherload, I quickly made five wishes.  It was interesting to notice what my brain came up with given five seconds to make that decision...

The route today was essentially a square and one of the corners was at this pub.  Initially this wasn't a problem as it was closed, but on laps 5 and 6 it was open.  I promised myself on lap 5 that I'd stop for a Coke on lap 6 as it was getting really warm by that point.  I powered through lap 5 on Kendal mint cake, a paracetamol and a caffeine bullet, but by lap 6 this was a welcome sight: 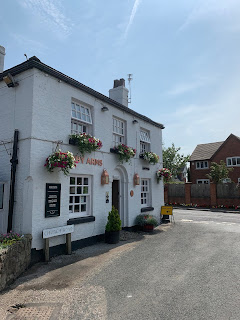 I ran in, to the surprise of the bar staff and locals, ordered a pint of Coke with lots of ice, then downed it.  I pressed the cold glass against my cheeks (heavenly!) and tipped the ice into my hat.  I felt a huge burst of energy that saw me through the rest of the race.

As you cross the motorway,  you can see the festival site on the other side of the road in the distance (click on the photo to make it bigger) - it looks closer than it is!  Just after this on my last loop I caught up with another runner called Natalie.  She was struggling a bit so I scooped her up and we ran the last kilometre or so together. 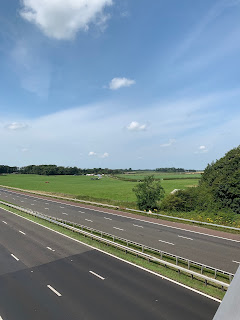 As we approached the finish line, to my delight we passed Hils again.  I shouted that we would wait to clap her in at the finish.  A few minutes later we crossed the line together.  Natalie's husband was waiting along with their gorgeous dog, who licked the salt off my legs whilst we posed for a photo!

One of the utterly brilliant things about this race is that there was free ice cream or ice lollies at the end, I have never seen this before at any race ever and it was so so welcome.  The race director said it had been very popular - I got the impression he'd bought an ice cream van for the benefit of his race entrants.  Honestly the whole day was full of lovely people. 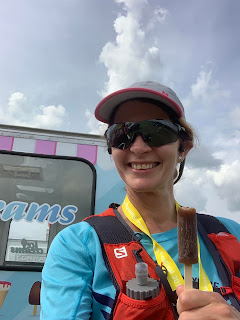 Within a minute, Hils came across the finish line and I got this lovely photo of her with one of the volunteers.  I sincerely hope I'm still running marathons at her age.  I meet a lot of older people through my work and I can honestly say I've never met any like her! 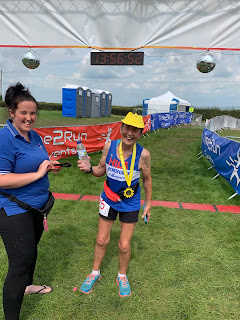 Lots of the finished racers were sitting around chilling at the end and one of them kindly took this picture of me before I hopped back in my car and drove myself home. 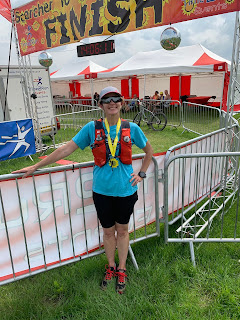 Not a bad day's work!  The day certainly lived up to its Scorcher name.  Another county ticked off and kept my legs ticking over - I can't imagine I would have run a marathon if I'd stayed at home so definitely a good call.  I can definitely recommend this company (called Time2Run events) - really friendly and well-organised.
at August 03, 2019