We arrived the day before the marathon and stayed in Kendal, as all the accommodation in Ambleside seemed to be sold out.  It was a sunny weekend in the Lakes, Keswick Mountain Festival was on and so was the Brathay 10 in 10 marathons - maybe that's why?   I collected my bib and a totally awesome goodie bag featuring Kendal Mint cake and this epic gingerbread medal: 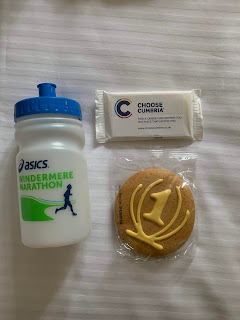 The next morning we set off to the start line.  I got in the car, put my bib and safety pins on the dashboard, and forgot to move them when Ian started driving... as a result my safety pins went whizzing off down the air vent, never to be seen again.  Whoops! 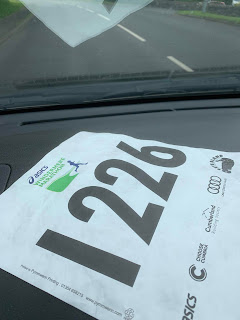 The road outside the race was due to be closed at 10am so we allowed plenty of time to get there.  Unfortunately so did everyone else.  There was a massive queue of stationary traffic and I got increasingly twitchy before deciding at 9.55am that we weren't going to make it.  I turfed myself out of the car and jogged the rest of the way, adding on a bonus mile-and-a-bit before the race even began.  After a wee in a bush (the queue for the toilets was too long), acquiring some extra safety pins, and stripping off a layer revealing my undergarments to a roomful of people (I literally have no shame any more), I was good to go.   Which was lucky as when I got outside there was a brass band already leading the marathon runners down the hill to the start line: 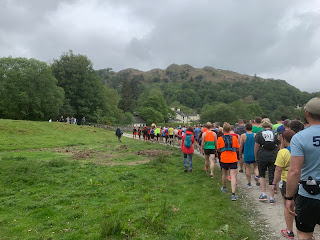 Curiouser and curiouser!  The race started on time and right from the start it was undulating.  As ever, I got caught up in the moment and ran up the first few hills, even though my plan was to walk them, not wanting to be the only one walking.  I got chatting to a man who told me this was his first marathon - a strange one to choose if you ask me but very pretty.  He asked what time I planned to do and I said five hours, taking into account the 420 metres of ascent.  I wasn't in any particular rush, especially as I'd done very little running since the 50 miler a month ago.  He then overtook me and disappeared - I wonder how he did?  The fields began to open out and I loved the way you could see all the runners ahead along the edge of the field: 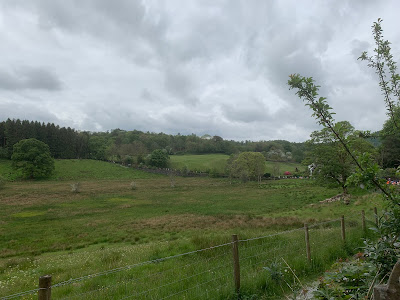 There were quite a few people around me at this point.  I'd managed to get away from the man with the sloshing backpack and the lady with the jangling change in her pocket - I honestly don't know how people can listen to that for 26 miles!  It took me back to when I ran Medoc last year in fancy dress that jangled all the way -- the flashbacks!  Arrgh!! 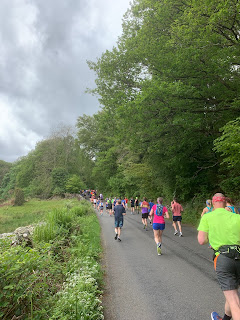 At about 8km in, we ran through Hawkshead and I was really touched that loads of older people had come out into the streets to clap and wave.  There were a surprising number of older people spectating and volunteering all the way through this race actually, it was lovely to see.  Some had been recruited from the local Rotary and must've been in their late seventies.  It was really nice of them to come out and support us. 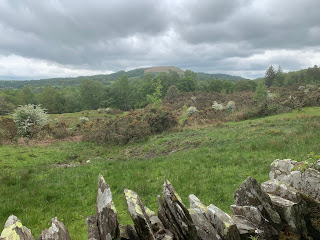 ---MOAN BREAK---
A bit later we were back in the countryside.  I was horrified that people were just chucking the plastic bottles from the aid stations into the gutter - I also saw them stuffed into dry stone walls on several occasions.  Personally I'd disqualify anyone seen littering as the Lake District is far too beautiful for that.  I'm sure the volunteers cleared it up but it showed exactly why we need more plastic-free races, it was really shocking.  Another disappointing thing was how little food there was at the aid stations.  The first one which had anything edible was at around 14 miles, this is absolutely crazy as most people start fuelling after 1 hour 30 minutes (I was at 2 hours 15 before they had so much as a jelly baby!)  They had literally one box of sweets and that was it.  Luckily I carried my own supplies, but this race had the least well-stocked aid stations of any marathon I've ever run... not exactly a compliment!
---MOAN BREAK OVER--- 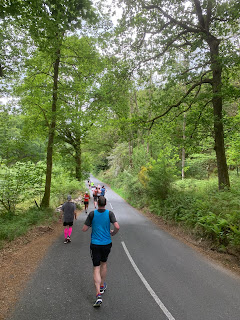 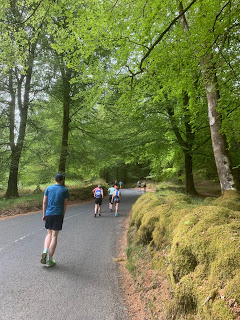 The scenery was quite variable and there were certainly plenty of hills.  They were generally quite short, followed by steeper downhill sections.  By now, lots of people were walking up the hills.  I'm convinced this is the best way - I can march uphill almost as quickly as running but using a fraction of the energy, then sprint down using the techniques my coach taught me last year when training for Convergence.  Overall it's faster than running both the ups and downs.

It was around this point I realised I'd missed Ian - he texted saying he was at Newby Bridge and I'd already passed Fell Foot.  Oh dear.  Road closures had caused significant difficulties! 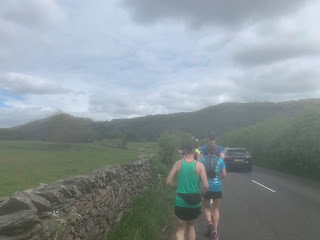 Not a great photo, but I took it to show how some sections of the course were on unclosed roads.  It was quite alarming having cars whizzing past you, or sitting on your tail waiting for an opportunity to overtake.  Nevertheless, I was feeling strong at this point. 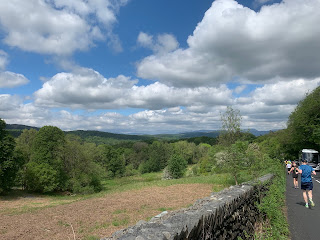 A little further on and it was starting to warm up.  The weather forecast had been for cloudy all day so I wasn't wearing any suncream.  Still no sign of actual Lake Windermere other than the briefest of glimpses through the trees. 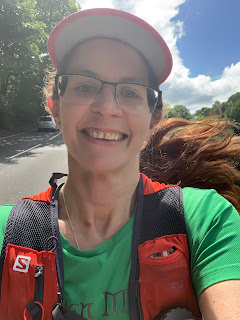 I love this photo.  I was really having a fun time at this point, haring downhill overtaking everyone with my hair flying out behind me.  This was around 30k, which I'd done in 3 hours 5 minutes - a pretty good time for me!  I normally struggle around 26-28km but today was a breeze - I think because the terrain was so varied. Hills definitely make it less boring!

At mile 21 there were a couple who had set up their own aid station on the side of the road.  I wish I'd taken a photo because it was awesome.  They had savoury snacks (cheese biscuits, crisps) and bananas, neither of which the actual aid stations had!  They were super-friendly and lovely and a total highlight - they powered me through the rest of the race. 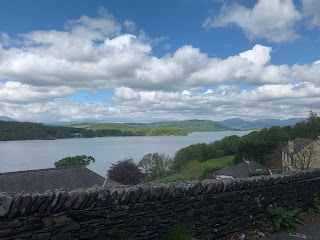 This was the last picture I took, probably round about 22 miles.  I suddenly felt full of energy and was overtaking people one after another.  I kept thinking how it'd make my flyby on Strava look good, haha!  This motivated me to push harder and before I knew it I had significantly picked up the pace.  Kilometres 38, 39, 40 and 41 were all under 6 minutes per kilometre, a pace I hadn't seen since kilometre 22.  I think it was because I was well rested and had a nice solid endurance base from M2L, so I just wasn't getting tired when everyone else was.

By 25 miles I was starting to flag though. I'd run up a few hills in my enthusiasm and I just didn't know if I could maintain it.  By this time I was running along the section I'd already done first thing this morning, as I approached another big hill, I slowed to a walk.

As I did so, a runner I'd recently overtook came alongside me.  He said, "come on, you can do this".  I said, "I can't".  He said, "yes you can" and I reluctantly speeded up to a jog.  By this time I was breathing heavily and just wanted to stop and walk, but every time I thought about it the man pressed me onwards, telling me we were nearly there (I knew he was lying but couldn't speak!) and saying I was helping him (also a lie - he wasn't even out of breath so I was definitely slowing him down). I told him to go ahead without me - he declined.   I hauled myself up the hill, feeling sick, wondering if I was going to keel over.  Suddenly the finish was in sight and one final push and we crossed the line together. 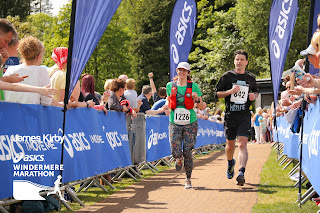 People like him are a credit to running.  I didn't know him, I may never meet him again, but he kept me going through that last mile in a way I simply couldn't have done on my own.  I hugged him, thanked him profusely and he went off to his family and I went to lie down on the grass.  I checked my watch.  We both finished in 4:29:42.  This is my best result since Berlin 2018, which I did in 4:25, and Berlin is flat as a pancake.  My Garmin recorded 572m ascent in this race, meaning I was almost certainly faster than I was in Berlin - so probably the fastest since Liverpool Rock n Roll in April 2018.  I was beyond delighted with that! 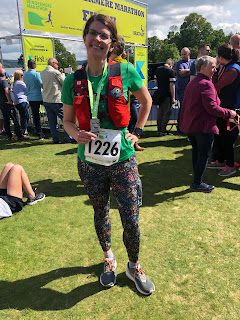 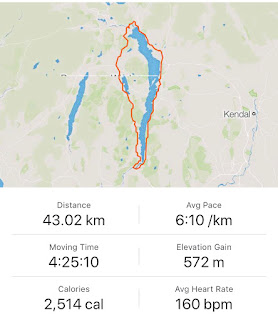 Ian found me and took this photo and we got out of there as quickly as we could as the whole place was totally overrun with people.  After 20 minutes navigating out of the car park (!) we made our way back to the nearest village where Iz had spent a happy afternoon painting.  She brought me an ice cream and we drove home.  Happy days.