Ahhh, North Yorkshire.  It's been a long time coming.

I originally planned to do Hardmoors 55 as my North Yorkshire race, which I signed up for back in late 2019.  Sadly, after training all winter, the race was my first to be thwarted by Covid-19 in March 2020.   Here's what I wrote about that at the time.  Undeterred, I booked onto Hardmoors 30 on New Year's Day, deftly negotiating the NHS Christmas leave rota, only for it to be cancelled by Covid-19 as well.

As it turned out, the rescheduled 30 was my first race of 2021 that hasn't been cancelled.  However, it wasn't yet possible to stay in a hotel due to Covid-19 regulations, and self-catering accommodation in Whitby was well over £200 a night.  I turned to the Hardmoors community, asking for somewhere to stay the night before and was showered with offers, eventually going with the lovely Dave in Pickering who very kindly put me up in Covid-secure accommodation.  If you're thinking of a holiday in North Yorkshire - and you should, it's stunning - I can highly recommend his place (see Low Costa Mill website).  Massive thank you to Dave and his family, without whom I would've been sleeping in my car in Whitby Abbey car park and would have had a very different race experience.  Instead, I awoke in Pickering after 10 hours sleep, had breakfast and coffee and set off for Whitby at 7:30am.  The only stressful part was realising that despite downloading the GPX file, I had failed to put it onto my watch, so I was going to have to navigate manually.  Luckily I did have the course on my phone OS map app and a paper map as part of the mandatory kit.

I arrived with only 20 minutes to pay for parking, hand in my drop bag and go to the loo before my allotted start time of 8:36am.  Groups of six were called every 2 minutes and (wearing masks and sanitising hands) received their race number and pins before being set off.  The organisation was spot on - every detail had been carefully considered. 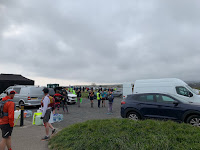 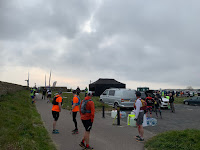 The race started more or less in the car park and then quickly looped around to the coast.  I knew the race largely followed the coastline and the weather was perfect for running. 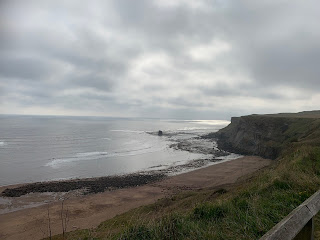 So far, so good as far as the route was concerned.  It wasn't really marked, but it was totally obvious as there was only one path (the Cleveland Way) and for the first 11k or so I could always see people ahead of me due to the open vistas.  Great for navigation, great for views - not so great when you need a wee.  I eventually found a partially secluded spot but managed to scrape my legs and ankles on the very scratchy gorse! 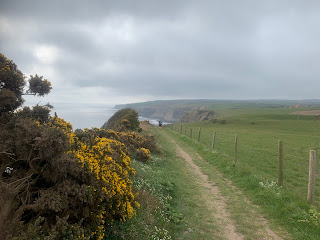 The pre-race email (actually there were a LOT of pre-race emails - if you enter a Hardmoors race be prepared to do a lot of careful reading!) suggested that road shoes would be better than trail as it had been dry for quite a while and the trails were all bone dry.  I don't think I would've considered running in road shoes otherwise and am very glad I did.  I barely saw a streak of mud the whole day. 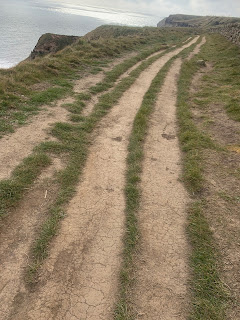 I had decided beforehand to walk all the hills as it's been difficult to do much hill training due to Covid.  I came to a little hill with a sign saying "Camera ahead!" - why do photographers always sit on top of hills? - but insisted on walking it anyway to conserve energy.  I haven't run further than a marathon since Day Release last November... better safe than sorry.

As I got further up the hill, a lovely view of Robin Hood's Bay opened up so I took a photo.  Just as I did so, the photographer shouted, "Get running lass! Never mind taking photos!" which made me laugh.  Obligingly I ran towards him.  The photos were, as usual, hideous, so you can have the one I took of the bay instead: 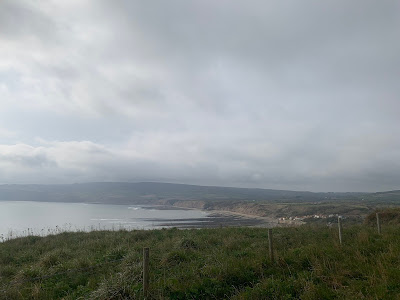 Shortly after this, the race turns inland and onto a path called the Cinder Track, which was accurately named as it was dark and dusty.  I had to scrub it off my ankles later in the shower. 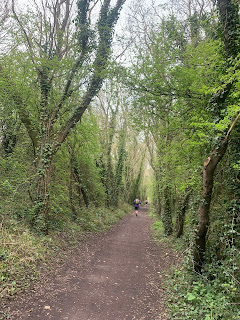 Around this time I phoned Ben, my lovely new boyfriend.  It was his birthday today, but it wasn't practical for him to come to North Yorkshire and I couldn't miss out on my first proper race in six months so we made do with chatting on the phone for an hour or so whilst I ran.   Time passed quickly and I passed a couple of checkpoints - the marshalls were very friendly and the Chia Charge bars were much appreciated.  I joked that they were flapjacks for people with dental problems.
Even the inland sections of this race often had views stretching out towards the sea.  It was really pretty and starting to warm up a little now. 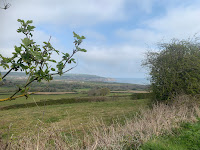 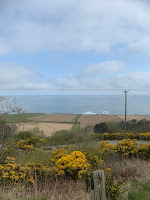 Hardmoors are famous for a few things : being very friendly (the marshalls were without fail absolutely charming), the races always being longer than the advertised distance ("bonus miles") and the motivational signs along the way.  There were probably about a dozen of these, I only took photos of two.  The hill I'd just walked up was absolutely massive, haha. 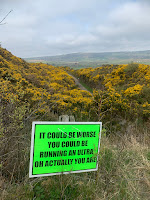 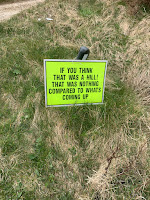 The race wound onwards.  There weren't so many people around by now and I had to check the route a couple of times on my phone.  I felt fine though - this was my 7th marathon this year as I've been running them on my own to keep my mileage up. 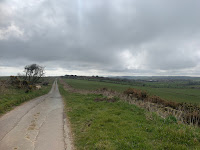 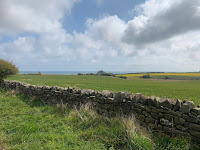 The route turned back towards the sea at this point and I realised we must be coming up to the 17 mile checkpoint.  I knew this was called Cloughton Wyke (although I still don't have a clue how to pronounce it!) as this was where the drop bags were.

This race doesn't usually have drop bags but because the race organisers were unable to stock the checkpoints with as much food as usual, they decided to allow them.  I haven't done many races with drop bags but I knew it was good to have some food in there that was different to everything else you were carrying so I'd added chocolate marzipan balls and Kendal mint cake.  I'd also put in a clean pair of socks as that can really help, however by the time I got there I couldn't be bothered to change them as I was keen to just crack on.  In truth, I needn't have bothered with a drop bag at all.  Anything left behind would be thrown away so I stuffed the contents into my already very full race vest.  Hardmoors races have an extensive mandatory kit list - I have no issue with this - and there was a spot check here.  One of the marshalls also complimented me on my rainbow shoelaces! 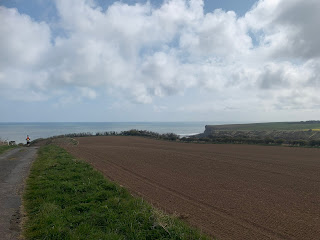 Here I am walking up a hill eating marzipan balls.  Note to self: chocolate-covered treats are best when not kept in direct sunlight for several hours.  Still nice though! 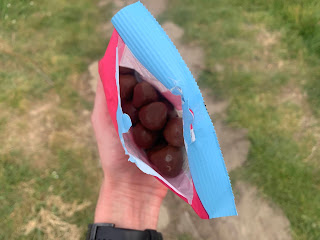 The rest of the race follows the coastline back to Whitby, so my worries about navigation were largely over.  Phew!  The coastline continued to look beautiful and was very very quiet - when I came to North Yorkshire before to recce for the Hardmoors 55 I was amazed at how much space there is and how few tourists there are - compared to the Lakes which are absolutely rammed. 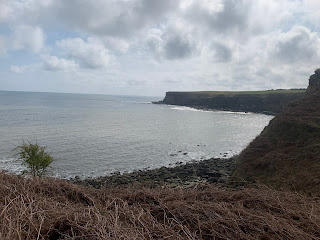 It was still pretty undulating though.  I could see runners ahead of me again at this point - I would slowly gain on them on the flats and downhills and overtake, then they would pull ahead on the uphill, then repeat. 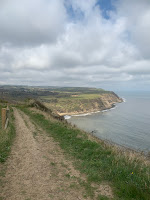 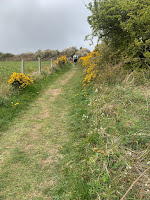 Somewhere around this point, one of the people I'd been leapfrogging had stopped to check the route.  I got OS maps out to check and we got chatting.  Her name was Suzy and the reason she was so great on the hills was that she came from Durham - no shortage of hills near there!  Suzy was in with a chance of getting a prize as she was in the next age category up from me.  We soon established that she had started 8 minutes after me but we were running at a pretty similar pace and ended up running together for the next 10 miles.  Before the race I'd aimed to finish in 6 hours 30 minutes, so we pushed each other to try and manage that.
At some points the race came right down to sea level and then back up roughly hewn steps to the cliff.  Suzy was much better at this than me! 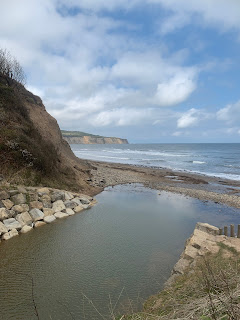 The time passed quickly.  We talked about where we worked (Suzy is a physio so a fellow allied health professional!), how we met our partners (I always enjoy finding out other peoples stories and Suzy's one was just lovely), other races we have run/have planned, our children, etc etc.  At one point we were interrupted by the screaming of birds and suddenly saw a whole wall of kittiwakes: 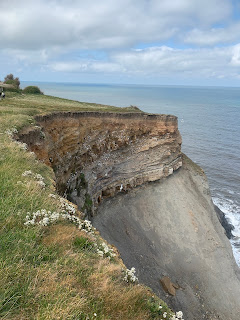 Zoomed in version - it was a pretty awesome sight and sound: 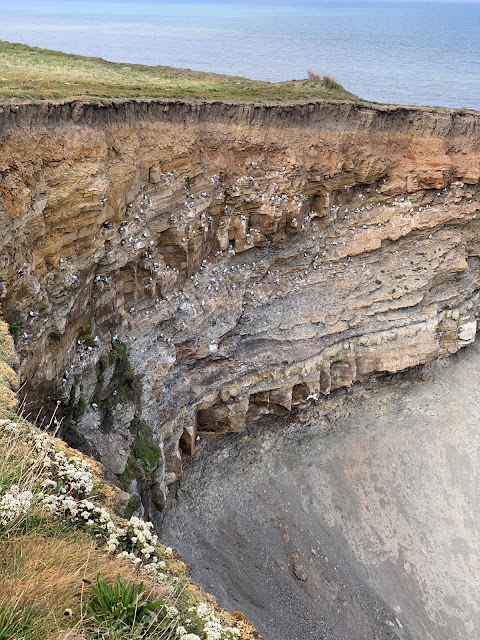 Suzy had only run a 30 miler once before but has a 60 miler coming up in the summer so we talked about strategies to manage it.  I pointed out that the end of a 30 feels totally different to the mid-point of a 60.  You never think at the end of a 30, "oh I could easily do that again" because you're expecting it to end.  So much of long-distance racing is about monitoring your mindset and not allowing yourself the luxury of expecting it to end until it is the end. 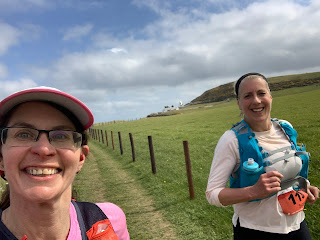 The GPX sent out by the race directors was 52km which is just over 32 miles, but the actual distance we ran was 54km, so just over 33 miles.  We kept going right to the very end - without Suzy I definitely would have started to slow down over the last couple of km as I was expecting it to have ended!  Due to the staggered start there was no way of knowing how well you'd done, as the people around you may have started before or after you did, but my watch said I'd finished in 6 hours 22 minutes which I was pretty pleased with.  Suzy finished in just slightly over 6 1/2 hours.  It was a week before the final results came out, in which Suzy missed out on a prize by 11 flipping seconds!  Ahhhh!!  She was much more magnanimous about it than I would've been though!  We got our medals and swapped numbers.  Here's my finish line pic with the Abbey in the background: 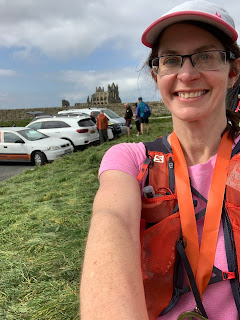 Here's the remains of the cinder track on my ankles and the graze from the gorse (which still hasn't fully healed a week later! - that stuff is vicious). 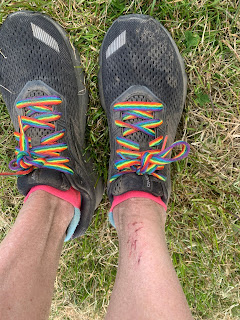 And here's Garmin's summary.  Plenty of ascent, plenty of calories burned (and plenty of marzipan eaten), all in all a pretty good day out.  Nice to be out on the trails, particularly lovely to have crossed off North Yorkshire after all this time, and just great to be racing again.