I signed up for this race on the spur of the moment because I was grumpy about my February marathon (Icing on the Cake) being cancelled due to snow.  It was all a bit last minute!  After I'd booked it, I realised it was only 23 minutes drive from Stourbridge where I used to live.  Hasty preparations followed and I arranged to meet up with old friends there on the Saturday.  Iz (my daughter) and I would stay overnight and I'd run the race the next day.

It all went according to plan until we had a bit of a Hollywood breakfast and I suddenly realised it was 9.20 and we hadn't left Stourbridge yet and we were meant to get there by 9.30, eek!  We drove like the wind and arrived at 9.42, luckily it was all OK as it was quite a small event so I managed to get registered, get instructions on the route, and get onto the starting line with plenty of time.  Phew!  Iz stayed in the car, intermittently doing homework (minimal I suspect!) and instagramming her friends pictures of herself sitting in the driver's seat... 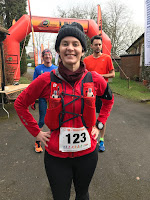 The race was called the Seven Deadly Sins because there were actually seven races, one every day this week.  You could do different distances but there were two ladies who completed their seventh marathon in seven days today - amazing!  I also met another lady who was running 100 half marathons this year to raise money for Willen Hospice in Milton Keynes (where I grew up). Fundraising page here if you can spare a few quid for a good cause.

The route was simple - there were six loops, followed by three out-and-backs.  Not ideal for my map as it will look like a tiny dot, but oh well!  I got started, noting a few little hills on the way out (the race briefing said "with the exception of one small hill the route is generally flat").  By the time I'd finished Garmin said 350m ascent which wasn't quite as flat as I'd been hoping!

Before I got round the first loop, I got chatting to Lucas.  Today was Lucas's 225th marathon.  I love meeting people like him when I'm running because it's really easy to while away five hours talking about all the races we've done, which ones we recommend, which ones we're doing next etc.  And that's exactly what we did!  Lucas lived 10 minutes down the road and this was his third marathon of the week - he never does any training and just runs loads of races.  He has the same philosophy as I do that it's better to be able to keep running than go fast, and also my other philosophy that you should always walk up hills, so we were a perfect fit and ran the entire race together.  Here we are midway round the course: 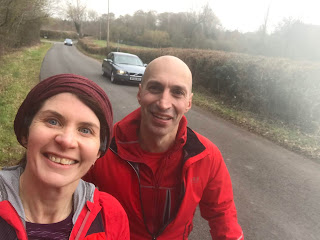 The course was quite repetitive but had some pretty sections, including a lovely quarry which I sadly didn't take a picture of.  It had a little trail section, a church up on a hill and some lovely countryside views.  I didn't take many photos but hopefully this gives a taster: 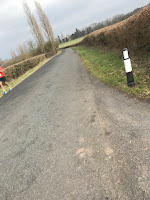 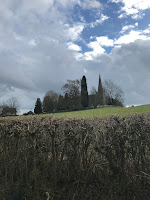 It was a gorgeous sunny day (in part) and chatting to Lucas passed the time very quickly.  We soon finished the six loops so I called Iz to let her know we'd be passing the start.  She hopped out of the car and brought medicinal jelly babies and waved us on our way again.  We repeated this three more times, the final time collecting my speaker so we could listen to some music on the way.  We joked that this would be our fastest out-and-back as we were both motivated by a bit of R&B!  On our way back we passed a lady who said, "Are you two still nattering?" which made me laugh as I can talk all day and so could Lucas!  We were both starting to get a bit tired by this point but as we turned the final corner we still had smiles on our faces.  I didn't realise til later that we also had matching outfits, haha! 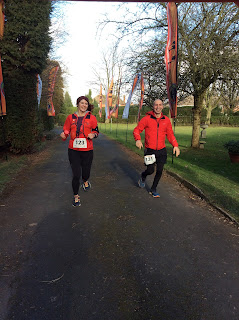 The last time I ran an entire race with someone else was Brighton with Tom in April 2017 and it was really fun to do it again.  We finished joint 8th out of 14 doing the marathon, had a thoroughly enjoyable day and no issues whatsoever.  There was a fantastic huge chunky medal, a hot dog and a cup of tea at the finish line (and they even kindly made Iz a vegetarian one).  We were back in time to see one of the 7 in 7 marathon finishers cross the line which was a lovely moment and I even drove home afterwards! 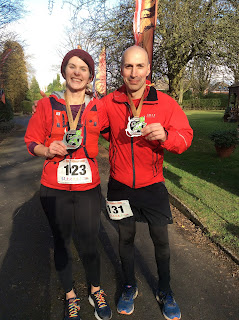 Thanks to Lucas for the company, and Steve and team for a brilliant, fun and beautifully well-organised event.  Iz said, "when are you going to do the other six?" I feel I may have to one day!