Kielder was my first marathon since I had surgery 6 months ago.  I'd signed up for it in August last year, a month before the surgery, with no idea whether I'd be fit enough to complete it or not.  I decided that to be on the safe side, I would treat myself to a monthly coaching package to make sure I trained safely and sensibly (prior to this my training plans were a mixture of stuff I found on the internet, advice from people at various running clubs and making it up myself).  I met Matt Buck at Love Trails festival last year and signed up in December, and have been under his brutal regime tender care ever since.  With his help, I've worked my way back up to fitness and am now where I was pre-surgery, if not slightly better.  I wasn't too worried about this marathon - particularly as I'd done a snowy 21 mile run in the Peaks the weekend before - and I was especially pleased that the weather was finally being a bit kinder!

We set off under blue skies and the drive was exceptionally pretty.  These were the views that greeted us as we entered Northumbria: 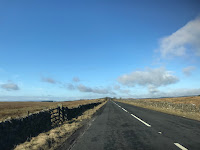 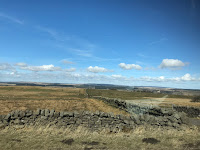 We found the pub where we were staying, had a delicious lunch of as many carbs as I could manage, a quick nap and then chucked on all my gear and headed for the race start.  I was pretty early as I had underestimated what a tiny event it was (there were a maximum of 400 places, but it'd sold out months ago) - I reckon there were only about 300 there on the day.  As a result, kit check took about 30 seconds and within the first 10 minutes I had my race number and was ready to roll... about an hour too early.   I had a cup of tea, I went to the toilet a few times as per usual, and took a few photos whilst waiting for things to kick off.  The race started at 5.30pm, definitely not a good time for me - I much prefer a morning start.  I felt a bit sluggish, even sleepy, but in the back of my mind I knew I'd be OK once I got going. 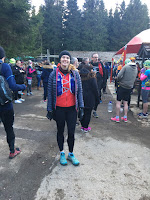 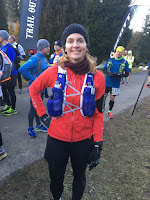 The race began on time, and weirdly started with a short loop that took you back over the starting line before heading out towards the lake properly.  My goal was not to set off too fast, since I'd done that in two recent races (London Big Half and Milton Keynes 20 miler), both times completing the second half dramatically slower than the first.

As it turned out, there was no risk of setting off too fast as I'd started at the back and the trail was quite crowded.  As we turned a corner about a kilometre in, I realised that I was actually quite near the back of the field - there were probably only 50 people behind me.  I found this slightly alarming but tried to stick to my pace, figuring it would pay off later.

The views were spectacularly lovely.  I saw other stopping to take photos and at first resisted joining them, before deciding it was probably more important to chill out and enjoy it than worry too much about my time.  The race goes all the way around the perimeter of the lake in Kielder and the sun was already starting to set a few kilometres in: 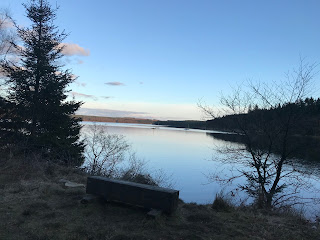 The route varied from being out in the open to weaving through thick woodland, in this section there was moss growing in humpy clumps over the forest floor: 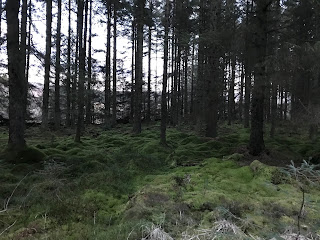 As the sun set further, every corner treated us to more pretty views: 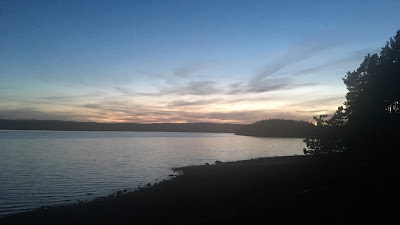 Around this time, it started to feel a lot colder.  The race director had mentioned that the conditions were perfect for hypothermia - a warm, sunny start with clear skies would lead to a sudden drop in temperature as night fell.  I had a couple of layers on but realised I'd soon be very cold if I stopped moving. 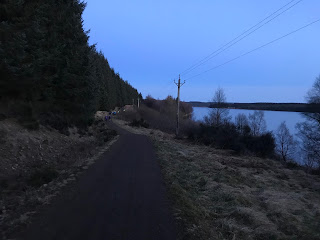 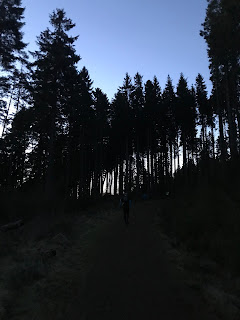 I walked all the hills (which was easy because everyone else was doing that too).  To my surprise, I overtook a lot of people when walking uphill, I'm obviously a speedy walker.  It occurred to me that it's probably because I'm constantly late for work and have to march up the hill to Lime Street so as not to miss my train!!

The other time I consistently overtook people when I was running the downhills. I'm fearless at running fast downhill because I've never had knee issues, I think a lot of runners are more cautious.  I was wearing trail shoes with really good grip so I wasn't afraid of skidding, even when I couldn't see where I was going. 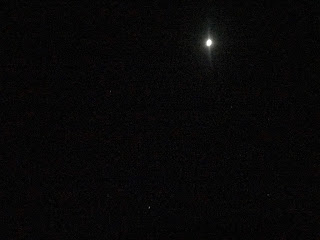 By the halfway point, it was properly dark and I had to put my head torch on.  Luckily I had the brightest head torch in the known universe, a LED Lenser MH10.  I kept it on low beam when behind a group of runners, then turned it onto full as I overtook and it was like a new dawn!  Several other runners commented on it - definitely the most useful bit of kit I had today.  The stars were incredible, though it was difficult to properly appreciate them whilst running and even more difficult to photograph them with my phone...

After the 30k point, there were some sections where I was running through thick forest and couldn't see either the runners ahead of me or behind me.  I was completely alone, in the cold and pitch black, in the middle of a forest.  I won't lie, I was a bit scared, and that definitely spurred me on to pick up the pace a bit!  I felt really strong around the 37km mark and overtook loads of people towards the end, including some on the last uphill towards the finish line.

According to Garmin I did the first 21 km in 2:22 and the second 21 km in 2:29 - still not quite negative splits but a hell of a lot closer.  Only a 7 minute difference - really not bad especially considering the terrain - there was 2200 feet of ascent.

Compare that with Milton Keynes, where I did the first 16km in 1:33 and the second 16km in 1:42, an 11 minute difference over a considerably shorter, flatter distance). 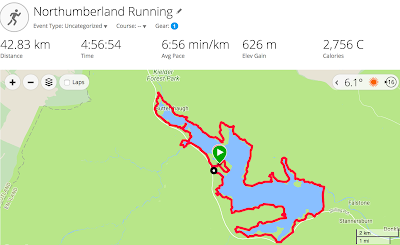 The race ended really weirdly - there were several tight turns right at the end, spectators cheering, then you turned a corner and all the spectators were gone.  You were left with nowhere to go but either a dead end or through into the bright lights of a village hall-type structure.  I faltered in the sudden brightness, unsure if I'd taken a wrong turn, before people started cheering, someone rushed forward to take my number and give me a medal and I realised it had ended.  Quite the strangest end to a race I can imagine! 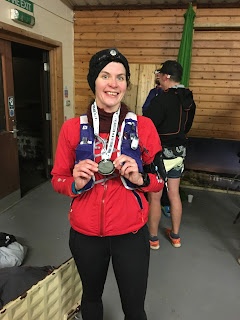 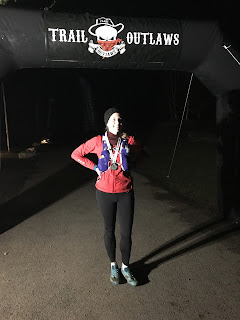 Thankfully, I'd decided to book food in advance so straight after these pictures at around 11pm I tucked into veggie chilli and rice before the freezing walk back to the car and the pub where we were staying.  There was no time to stand around appreciating the beautiful stars as it was bitterly cold.  When I checked the results the next day, I'd finished 146th out of 285 finishers, so about halfway through the field, despite my slow start.  Not bad! And not a bad medal either :) 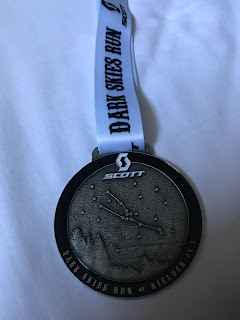