I'd chosen this race towards the end of last year.  I was casting around for a trail marathon that met the criteria and this one did the job.  It was 4 loops of a 10k trail with a bit extra added on and I'd not done a looped race before, and there was a concurrent 10k for Ian to run so he didn't have to wait around for me all day.  What's not to love?

The night before I was diligently reading the race briefing (always a good idea in case there's some weird bit of mandatory kit/critical instruction that had previously gone unnoticed) when I discovered that there was also a concurrent 60k ultra marathon (6 loops of the circuit) and you could upgrade on the day.  Few races allow this and I've been doing A LOT of running lately.  I also have a couple of low(er) mileage weekends coming up.  Hmm.  Hmm.  I text my coach.  He replies, "I think yes, go for it.  Obvs slower pace through and walk the hills.  DRINK lots as it's gonna be warm and make sure you eat every 30mins".  I'm excited.  We drive to Nottingham the night before and eat the obligatory pasta for dinner then get an early night. 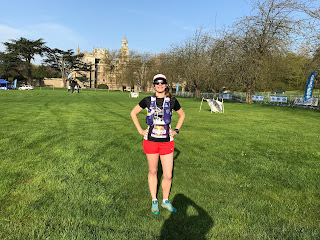 We arrive bright and early at 8am, get myself a nice new ultra race number, had a delicious expresso and a quick loo trip and then it's time to set off at 8.30am: 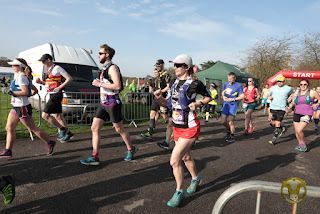 The race was predicted to be warm and it was warm.  Within minutes of starting, I needed the loo again (that expresso was starting to look ill-advised).  By Mile 1 I knew I was going to have to stop so rather than holding on I decided to make use of the bushes.  Sadly when I rejoined the race I was literally dead last...  There were only about 50 ultra runners and I could see down the hill behind me, there was nobody there.  The tail end of the string of runners was a good 250m in the distance.  Competitive instinct kicked in, I cracked on and didn't walk any of the hills.  I overtook a few people and started to settle into my stride once I'd got round the first circuit. 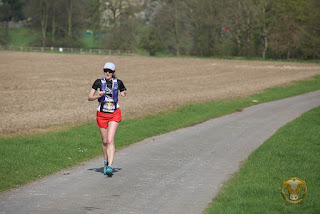 The second circuit was the hardest as it felt like there was still a long way to go.  My shorts were chafing as this was the first time I'd worn them this year (!) so I decided I'd have to change into leggings, which luckily I'd brought with me along with a change of shoes just in case.  Ian rang me when I was about 15k in and kindly fetched my spare kit from the car and met me when I finished my second loop.  I proceeded to remove my shorts in front of a few hundred spectators as I didn't want to lose too much time by going to the toilet (oh dear).  Hopefully I didn't traumatise too many small children.  I also switched from trail shoes to road shoes as the trail was quite hard and rocky which turned out to be a great decision.  My road shoes felt like slippers! 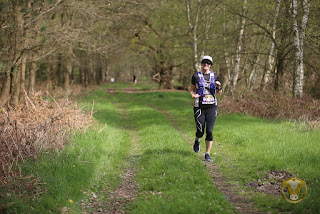 The change of outfit gave me a boost for a couple of km, but the third circuit was also fairly tough. Other runners would run with me for a bit and chat which helped pass the time.  The scenery was also very pretty and varied so I wasn't at all bored of it yet.

By the time I began the 4th circuit I felt in control.  I was coming up to the marathon distance and still had plenty in the tank.  The weather had cooled down and there was even a bit of rain!  The feed stations were really good, there were three each lap with lots of choice (mars bars, chocolate fingers, gels, oranges, walnuts, dates, sweets, crisps, cake, fanta, coke, water) and they were really well stocked right to the very end.   I picked up the pace for the 5th lap as I was feeling really strong, and then when I finished it I took off my vest and left it with Ian for the final lap.  I was well-hydrated so I thought losing the extra weight would make the final lap slightly easier.  I didn't see anyone for the first 6km or so, but eventually caught up with and overtook a few people in the last few kilometres of the race.   I realised with about 30 minutes to go that if I cracked on I would come in under 7 hours so I really bust a gut the last couple of kilometres, as shown: 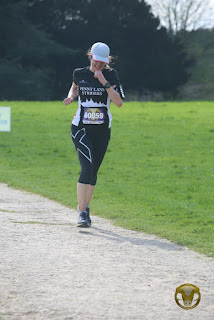 I actually managed three of my very fastest kilometres of the whole race in the last 5k, and the last 10k was the fastest of all six laps which is quite pleasing.  One final push and I was across the finish line! 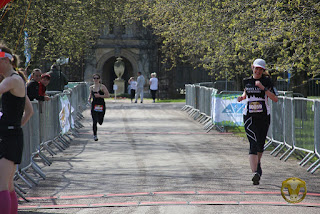 After the race there were FREE 10 minute massages, which were bloody brilliant, and an ice cream van, which was also brilliant, and a lovely medal.  Later there were FREE photographs (many many thanks to Curley Photography for these), you'll notice this report has about a billion more pictures than usual for this reason!
Here I am at the finish, representing my lovely new running club Penny Lane Striders: 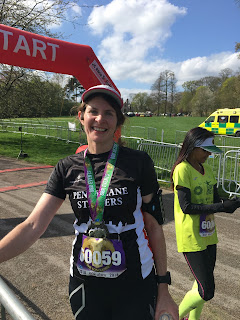 And here's some nice juicy stats: 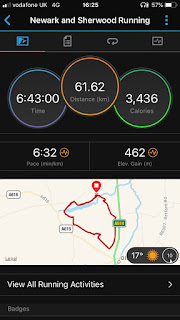 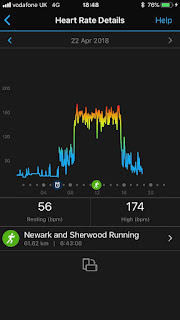 Definitely a race I'd recommend, with 5k, 10k, half, mara and ultra mara distances, on the day entry and really beautifully organised and marshalled.