When I originally booked this race and the New Forest marathon, I didn't plan on doing them solo and unsupported.  As the weekend got closer, I got more and more concerned about the driving.  It's fair to say that I wasn't really looking forward to it.

Over the course of the weekend I drove around 600 miles over about 15 hours, which is something like twenty times my average weekly mileage.  It varied from "OK" to "Horrific".  My mum said I should get a medal for long distance driving, nevermind the running, and at times it did feel a bit like that!

Again I broke the trip up by driving down to Milton Keynes after work (absolutely horrific journey, with the M6 closed twice - bloody gin lorry) then drove down to Dorset (which was long but OK as it was in the middle of the day).

I arrived at the site around 5pm, after stopping in a pub to write the previous week's race report (!) It had rained on and off all afternoon but was lovely from the moment I arrived.  I got my tent set up straight away and then wandered over to the 'race village'. 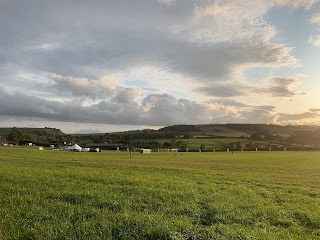 I picked up my race number from the very friendly folks in the tent, laughed at how I'd mistakenly thought this race was by the seaside and brought my swimming costume (I was mixing it up with another of their races, Run Jurassic) and scouted out the scene.  There were a variety of hot food stands, a bar, hot showers, a water point and plenty of clean toilets.  Excellent.
I went back to the car, sorted out all my race stuff ready for the next day and then went and got some food and a beer.  I joined a girl with pink hair sitting at one of the tables and we ended up chatting for a couple of hours.  Her name was Lucy, she'd run lots of White Star races before including the half marathon version of this race last year and enjoyed it so much she was doing the full this time.  By the time I left the tent it was getting dark, but sleeping on site meant I didn't need to get up until 8am which is a 2 hour lie in for me! 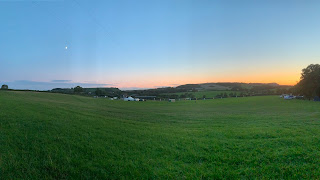 Next morning I paid £20 for breakfast, lunch and dinner from the food stands as there was so much choice and the food was all great.  I got my stuff together and headed down to the start line.  The race was yet another 2 loop course - regular readers will know I love these. 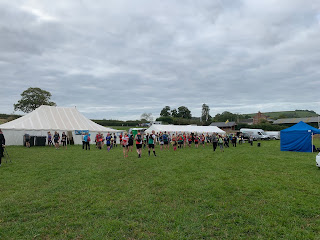 Shortly after setting off, the course very quickly went up a couple of savage hills with overgrown grass and hidden potholes to add to the potential-ankle-breaking fun.
This hill was called 'Pointless Hill' because it could easily be avoided by running along the road.  However up we went, and down the other side.  I loved the downhill which was steep and technical and I overtook a dozen people on the way down.  One day I'm inevitably going to face plant due to excess bravado, but I get such a kick out of downhills, it's often the most fun bit of the entire race, and this race had loads of them. 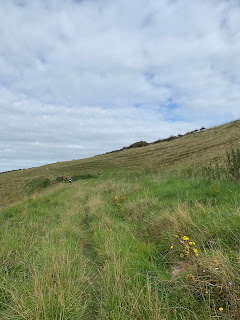 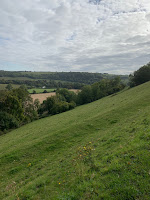 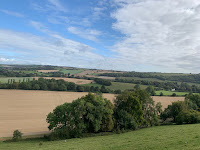 Around halfway around the first loop, I was running with a small group of runners and one of them was telling another that we were coming up to his old school.  He told us a story of how the schoolmaster used to make them run as a punishment, and that they would be sent out at 7am to do a lap of the school.  The schoolmaster would drive round and then chase them down the hill in his car (!) and if they weren't fast enough, they had to do it again.  This all seemed a bit depraved until we came round the corner and saw the school: 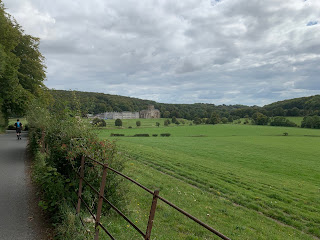 Definitely a bit of a Roald Dah-esque sadistic-schoolmaster private school - apparently it has its own golf course and dovecote etc etc.  The bloke running alongside him, who went to school in a tower block in London, could hardly believe his eyes.  The bit I found hard to believe was that this had somehow helped him developed a love of running!  I look back on cross country with horror, nevermind this torture!

It was also around this time I bumped into this chap, Andy, who was from Southampton.  He'd driven almost the entire way to Dorset (~2 hours) this morning before realising he'd left his running shoes at home.  So what did he do...?  Ran it anyway of course!  Apparently the road sections were quite painful and he didn't think he'd ever forget his trainers again ... but seriously what a good sport he was. Not sure I'd've been so brave!  I did check what size he was as I'd brought 3 pairs but to no avail. 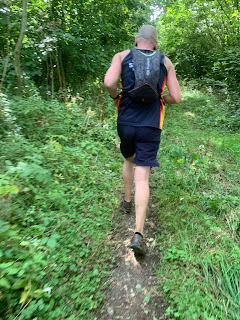 The course was very varied - a mixture of open fields, cornfields, forest and a little bit of road.  Somewhere near these sunflowers I saw a chap who looked injured, being carried along by a couple of volunteers.  I stopped to ask if I could do anything, they said no thank you and I carried on.  I quite often ask people if they want a paracetamol as often they do but for some reason I didn't this time - probably because he was already being helped.  I found out much later that the chap had had a heart attack (he commented on Facebook it was his 214th marathon and the first he'd DNF'd!) but made a full recovery thanks to the excellent medical support and flawless organisation getting him medical help in super-quick time.  Lucky for him he wasn't in the marathon I ran last week who couldn't organise a piss up in a brewery...  I was also glad I hadn't offered him a paracetamol - would've been like offering a thimble of water in a raging inferno. 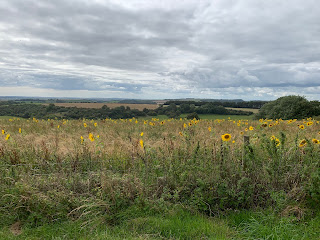 Shortly after this came the Love Station™(sadly not pictured) which was a special aid station which had all sorts of extra treats.  There was a chap in a fox costume, cake, crisps, coke, sweets etc plus lots of people clapping and milling around.  It was around this point that I caught up with Lucy and we ran a couple of miles together, conveniently on her favourite point in the whole course.  Just after the aid station you come out on this road, there's some truly stunning views in the distance and then you turn left and run across the most beautiful hills: 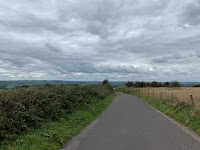 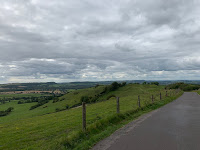 Just afterwards, the official photographer managed to get this lovely pic: 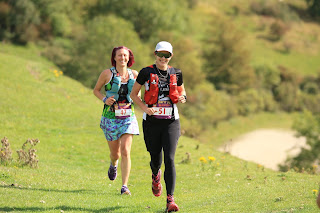 Lucy had told me about this bit last night so was lovely to run along it with her -  her ankle wasn't giving her any trouble and she was making steady progress. 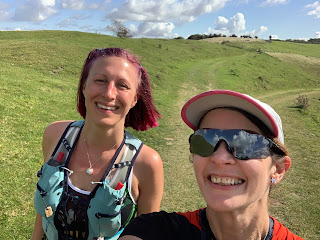 I think I lost her on this epic downhill, this race really did have it all: 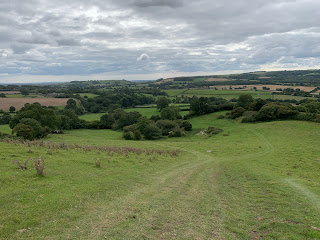 Time for round 2!   We collected a wristband and headed off for the second lap, this time skipping out Pointless Hill.   I spent quite a lot of it with Andy No Trainers, and his friends Lou and Sue who were really friendly.  The weather was consistently pleasant, occasionally a little warm, but never boiling like last week.  There were quite a few gates which I struggled to open and often jumped over or climbed under if there was nobody around to help. 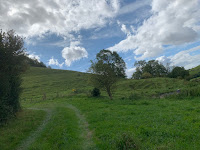 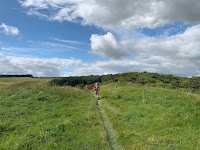 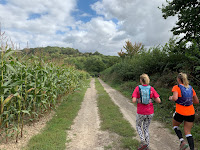 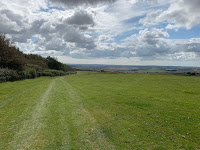 The race was going pretty well - last week had similar elevation and had taken me nearly 6 hours so I'd set out expecting a similar sort of time, however I seemed to be going a bit quicker and was in good spirits: 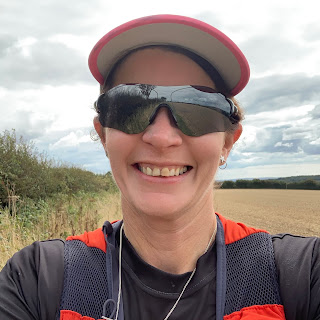 When I got to the Love Station™ the second time round, I heard one of the volunteers offering beer and schnapps to a runner, who declined.  I asked if she was joking, she said, "Would we joke about something like that?  Do you want one?"  I took her up on a schnapps.  It was AMAZING!  It reminded me of schnapps when skiing to give yourself a kick up the arse and it totally worked.  Whilst I was drinking it, I overheard a guy saying he was running New Forest marathon tomorrow.  Aha!  I told him I was doing it too, he asked me why and we had a quick chat about my counties challenge.  He left the aid station before me so I chased him down and demanded to know why he was running two marathons in two days also.  (The short answer whenever you ask that question is, we're all running obsessed crazies.  But there's always a long answer too).

His name was Ian and he's decided to try and bag 100 marathons before he's 40.  Impressively, he decided this when he'd only done 2 or 3, which meant he was able to start a blog about it, the fricken awesomely-titled Running Selfie Wanker.  We talked about our blogs, what huge narcissists we are, what a pain in the arse it is trying to take loads of photos for your blog whilst running, the messy politics of running clubs, about how (un)prepared we were for tomorrow and on and on.  A few miles passed easily.  Here we are: 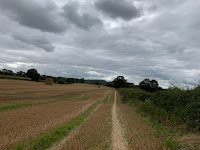 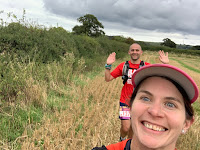 I note he has already written up both his reports, he wins the gold star for promptness!  Thank you also for the kind mention :)

I lost him in the last mile or so as I decided to try and get under 5 hours 30 so had some fun with the last few downhills but didn't quite make it... still 05:32:12 isn't bad!  I'd already heard that you get an amazing pint glass as well as a lovely medal for finishing this race - first race I've ever done that had such a funky 'prize' and I absolutely LOVE it! 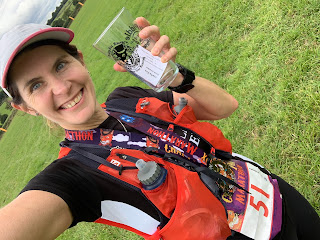 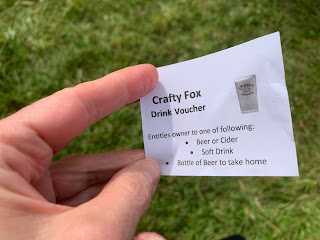 I waited around long enough to see Ian and his friend finish, then dashed off for a shower, a massage, some food (carb loading again! note how they are also plastic-free) and eventually that beer.  Yet again I was invited to join other people in the tent and chatted about the race, it was more like a festival than a race, everyone was so lovely. 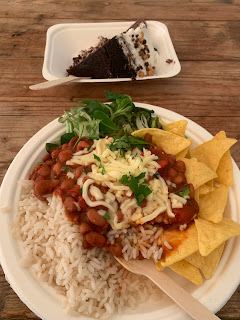 I went and got all my stuff ready for the following day's race before returning to the tent for more food before retiring at the ridiculously early hour of 8pm as I had a stupidly early start on Sunday.  Just as I headed off there was a second utterly ridiculous sunset - Dorset really is the most beautiful county so far.  This race was an utter joy.  I am already planning to come back and do more White Star Running races as the whole thing was brilliant from beginning to end.  Thank you !

One final pic taken by the official photographer (obviously photos were free - this race literally couldn't be better if it tried). 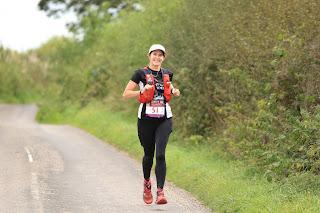