I'd originally planned to run the February version of this race (called Icing on the Cake) but it was cancelled due to snow.  When I discovered there was a summer version, also with an utterly fabulous medal, I couldn't resist.  The company, How Hard Can It Be Events do a selection of brilliantly themed runs, all with fantastic medals, and I'd definitely go back - they were friendly, organised and had plenty of cake.  What's not to love?

The race began in the valley and all around were massive hills.  I was having a rough morning and spent the walk up to the start moaning about everything.  "There's loads of stupid HILLS - I hate hills".  "I'm not a very good runner, this is going to be horrific". "I should just RETIRE and sit on the sofa and eat cake".  "I haven't run for AGES and I'm out of breath just walking up this tiny incline".  Etc, etc, etc.  Honestly, I'm a joy to be around. 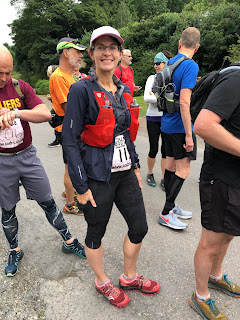 The race started with about 3 miles of more or less continuous hill, varying between pretty steep and even steeper.  I huffed and puffed my way up the first couple of miles, mostly walking, utilising the 'grinding it out' mentality that all marathoners cultivate sooner or later.

On the last long steep hill, I got chatting to the guy next to me.  At first I thought it would be a short conversation because he was a bit quicker than me, but I managed to hang in there.  His name was Mark and he was from Manchester.  He offered to take a photo of me when we got to the top: 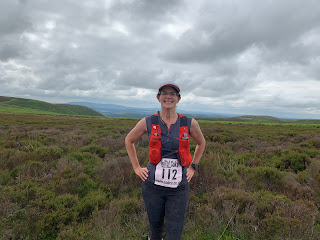 Mark was doing the half marathon (the marathon was two laps of the same course) and it quickly became apparent that we would just hang out the whole way round.  He told me about his camper van, his wife, his two dogs (Border Terriers), his usual running partner and all the races he'd been doing and the time just flew by.  The landscape was very pretty - this is the view from the Trig point:

And here's Mark and I.  At one point Mark shouted "CAR" because there was a car coming and the runner in front completely ignored him and kept running in the road.  We realised he'd got headphones in so Mark tapped him on the arm with his stick (pictured).  The man turned round properly angry and was about to have a massive shouty rant when Mark cheerfully said "Car!" and pointed at the car.  The man let it go and we ran off.  Blimey! Not sure what I would've done if punches had been thrown!! 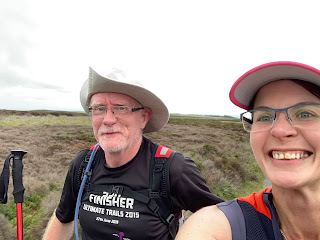 It wasn't long before we got to the descent down into the valley.  The descent was quite technical but had my beloved Peregrines on and we hopped and skipped over the rocks, mountain goat style - this was taken just before the big descent: 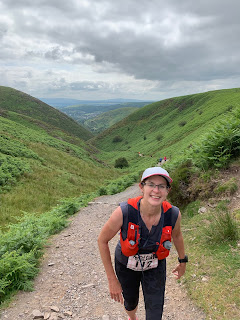 Mark and the others I was with were all finishing but I felt like I'd hardly started and was quite happy to do another lap.  In fact I'd headed past the start line without checking in when someone called me back to say I had to tell them I was going out again!  I went back and told them. There was watermelon and cake, both of which were fabulous.  I said goodbye to Mark and set off for 3 miles of climbing.  This time round I took a picture: 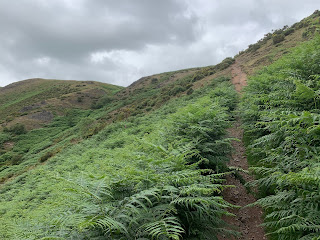 ...which reminds me I really must examine myself for ticks :)
I also had a nice chat with a guy from London who's training for the Barkley Fall Classic (respect due for even attempting that) during this section but eventually got ahead of him and caught up with the girl in front.  Her name was Angela from Warrington and she was a proper hardcore ultra runner.  It soon became apparent that she's done loads of massive races : 55, 80, 110 miles.  Wow.  She was also lovely! 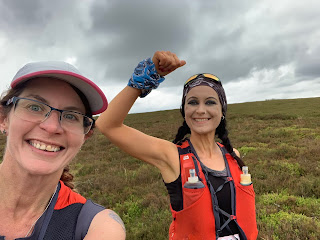 Over the next 10 miles we had a long conversation about races, cut offs and how important it is that race directors are consistent.  She told me she often vomits during races, after my experience at M2L I can safely say that would really put me off running forever but Angela just has a bit of a sit down and then cracks on!  Told you she was badass!!  I also had a comedy moment where I tried to jump over a bog and left my trainer behind.  Saw Ian at the checkpoint next to a pub and he'd kindly fetched me a shandy which made a nice treat at about 20 miles in, though I only managed a few sips.

Before long we came to the last checkpoint, the last turn and then we sailed down the hill, not caring in the slightest about running through a ford and getting wet feet (mine were wet already). 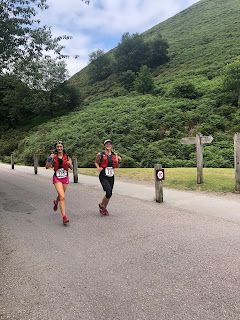 We crossed the finish line together, Mark was there waiting to clap us in and immediately told me I'd done the second half slower (!) but I didn't mind.  There was a lady running today who was doing her 100th marathon and she'd bought all the marathon runners a bottle of 'Shropshire Lass' to celebrate which we were given with our medals.  Such a lovely thought and an epic achievement ... it has definitely given me ideas for my 100. 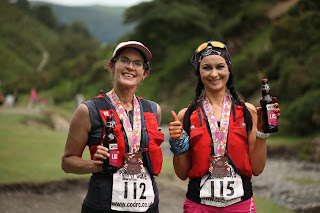 I counted up today and I'm at 22 official marathons - 36 if you include all the unofficial ones!  I refuse to just churn them out and I only run races once so it's going to take until approximately 2030. Whatever!  Something to look forward to. 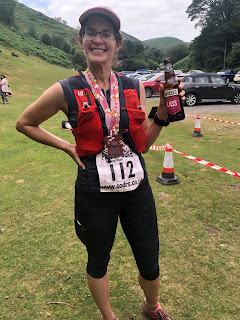 Here's today's bastard hills - over 4000 feet of ascent.  It's weird but I can hardly even remember the second and fourth hills - it's the first and third that stick in my mind.  I definitely remember the downhills though!

One of the main reasons I chose this race was the epic medal and it definitely did not disappoint!  What a beautiful beast!  Although the next one is going to give it a run for its money.... 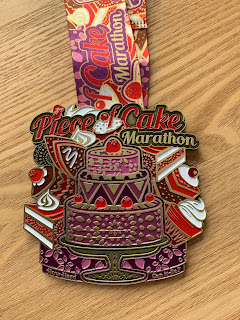 Overall this race was totally great.  Good checkpoints, nice friendly organisers, lovely running companions who made the time just fly by, absolutely stunning route, plenty of cake and a fabulous medal.  Really loved it, I think it was my favourite marathon this year.

In other news, I have added a Donate tab to my website as occasionally people ask to sponsor me.  Absolutely no obligation but if you enjoy reading my reports and want to chuck a couple of quid towards the new hospital in Liverpool it would be much appreciated.  Ta xx