I had a very good feeling about today's race from the outset.  The style and tone of the emails.  The online race briefing.  The description of the aid station.  The fact that it was the winner of “Best Rated Off-Road event 2019” from RaceCheck.  The fact that I didn't have to wear my vest or worry about GPX because it was loops of a 5k course and the race director was happy for you to just go to your car between laps. So obviously I set up a little aid station in my boot: 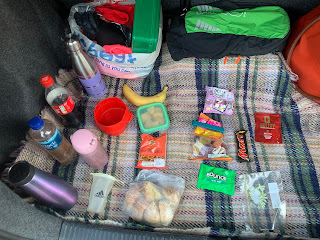 Then on top the weather forecast the night before was A-MA-ZING! 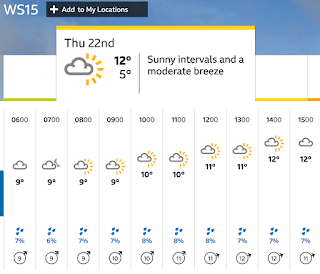 It doesn't get better than that.  And I think I deserve it after my last two races! I was due to start at 8:45 so I got up at 05:30 and drove the 90ish minutes down there.
Now technically the government Covid advice is to "avoid travel outside Tier 3" however that's advisory rather than legally binding.  Personally I consider being inside my car (on my own) and running in a forest (at least 2m away from others) extremely low risk activities.  I am far more at risk going to work in a hospital than I am doing this.  Plus with the Covid second wave I need to safeguard my mental health, and running races is what I do to keep myself sane.  I know I haven't got Covid because I'm on the Oxford vaccine trial and do a swab test every week, so I felt confident I wasn't putting others at risk.
Covid measures at the race were very strict which is a good thing and meant everyone felt safe.  I told a few people I was from Liverpool and nobody thought I was a reckless Covid-spreader.  Phew.
Here I am before the race started.  The last bit of the drive to Cannock Chase just as dawn broke was exceptionally beautiful and I was so so happy to be there. 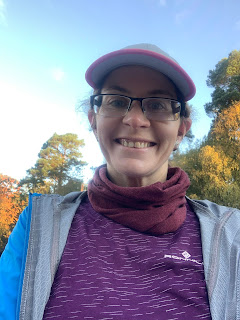 Here's a picture of the start line about 5 minutes before the start.  The race is on Forestry Commission land so had to be limited to 30 people under their rules. 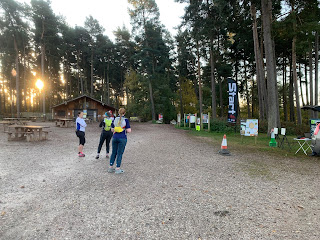 As soon as we set off, it was clear it was going to be a beautiful day.  The official photographer took this one of me just as I started - this was one of those lovely races where all the pics were free - image credit to Nick @nicksphotogallery 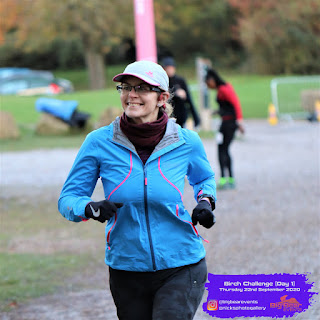 At the beginning I thought seeing other runners was going to be short-lived as we'd soon be spread out over the course.  In fact, because the route looped back on itself, by lap 7 I recognised pretty much every other competitor and there was much waving and friendly 'well done's.  The route was really beautiful.  The autumnal colours combined with lakes around every corner, little streams and blue skies meant for a stunning setting. 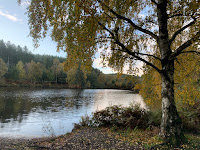 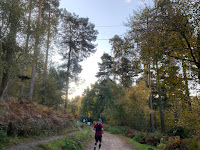 Every corner I went round had another beautiful view.  This was just after a U turn which I managed to miss on lap 5 because I was talking ... luckily I realised quite quickly as the signage was great. 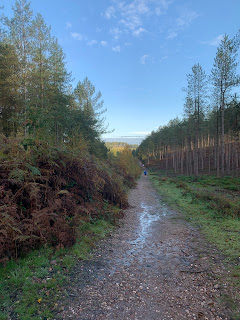 As I came down the hill towards this lake I was reminded of Rutland Water and some of the lovely lakes there, although the weather today was somewhat nicer than that day - which was only about a year ago... crazy. 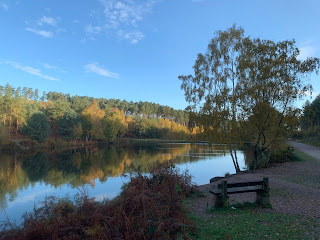 The loop was just under 6k, and at around 5k there was a river crossing.  I don't think I've ever done a race before where you had to run over stepping stones? 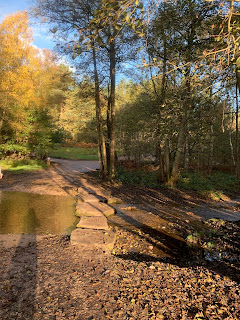 At the end of the first lap I went to the car and ditched my jacket and gloves and had some water, then headed out for round 2.  Quite quickly I got chatting to Dan and Rob, who are both regular marathon runners.  It transpired they had done the same race yesterday as well.  Both are chasing numbers - Rob told me this was his 72nd marathon and Dan was already well into the hundreds. 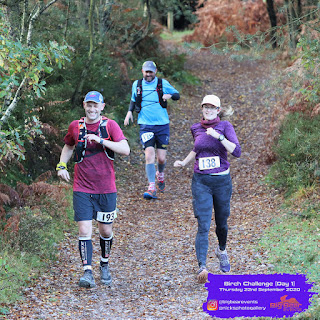 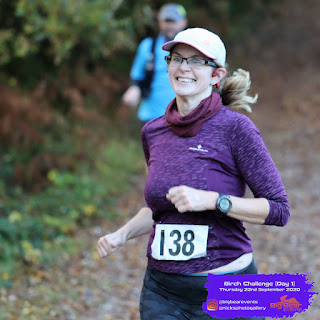 As usual, we compared races.  It turned out they knew lots of the characters from my other race reports - Lucas the chip shop dude from Seven Deadly Sins, Tim the jogler from Rutland marathon.  Dan had run Escape from Meriden (chained edition!) and told me some hilarious stories including being stopped by the police. I told him the dreaded swamp story from Convergence.  A lap passed without me noticing.  We saw another runner in a New Forest marathon t-shirt and told them about the signs and the Garmin stand and the parking.  I wondered if the other dude had hated it as much as me but reflected that if I said anything, he'd probably say, "Oh that's my favourite race and I've run it 10 times".  Dan said, "Or he might says, "I'm the race director"..." which made me laugh.  The furnace of faux pas beckons... 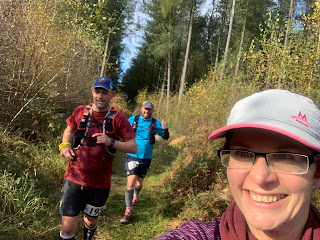 We talked about Covid.  Rob said he thought it was better now because people could be quite disgusting what with all the snot rockets and spitting.  Dan said,  mock-horrified, "You didn't have to tell everyone though"!  I laughed.  We walked up the hills.  We talked about other races I could potentially do in the Midlands. and Rob mentioned Big Bear Events do races in Leicestershire and Warwickshire also.  Another 5k went by.  The official photographer took this - check out that great social distancing ;-) 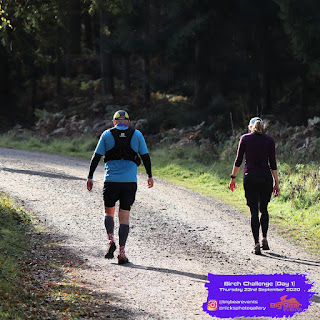 At the aid station I had my first mince pie of the year. 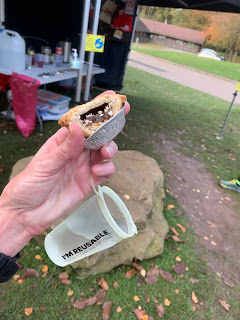 Somewhere on the next lap I lost Rob and Dan.  I put my headphones on and just trundled round, chatting to people occasionally and just enjoying the beautiful scenery.  As usual I had made little to no effort to find out anything about the course so the several hills had come as a surprise.  Pictured here they don't look too bad but there was 800m ascent overall! 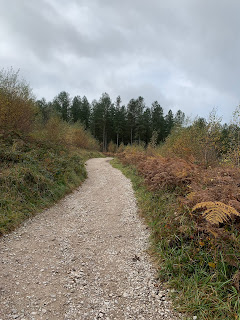 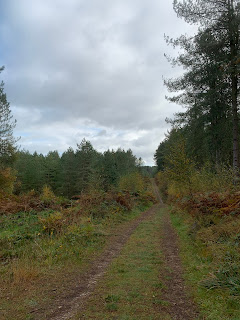 At the end of lap 5 there was a minor medical emergency - a guy came into the aid station bleeding.  The race director got him a bandage but didn't have anything to clean the wound so I went and found him some wipes and Savlon from my first aid kit in the car.  He was fine, just a bit shaken up.  I think he must've had a fall on the muddy bit near the end.  Most of the course was alright but there were just a few bits where it'd got wet and churned up by bikes. 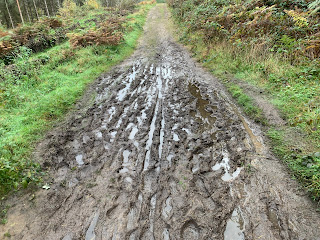 On the sixth lap I veered off course to try to find somewhere to go to the loo.  As I stepped into the more densely wooded forest, I was surprised to see a lone female walker coming the other way.  I said, "Oh, hello... just looking for the Ladies," and she said, "that's where I've just been!"  We both laughed and once she'd headed out of the woods I used the really quite lavish loo: 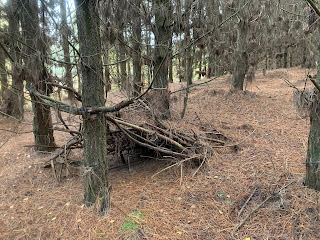 Afterwards I ran down the hill and passed her.  She turned and smiled, and maybe I imagined it but we had a bit of a shared "girl power" moment, both of us being single women doing our fitness thing, and she called out, "Have a nice day!" and I said, "You too!" and we both smiled.  It put me in a good mood for the rest of the lap.

A few more photos from later in the day when the sun came out again: 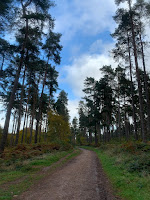 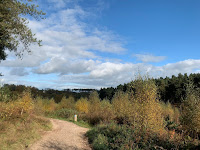 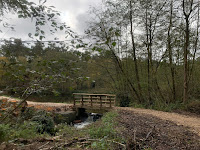 Having a super-happy moment in the sunshine on lap 6!  Earlier at the aid station I'd overheard a girl say, "I can't think of anywhere I'd rather be than here, doing this, today" and that totally sums up the feeling.  I'd got a 'free' day off work (made up of all the unplanned overtime I've done lately), I was out in beautiful woods, doing a marathon that counts towards my challenge, feeling great and the sun was shining.  Epic. 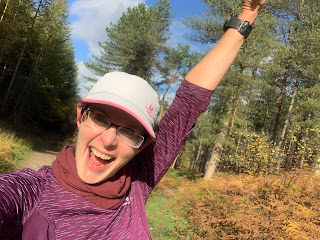 The lake view was even more stunning than earlier so I took another picture and then spotted this gorgeous tree at the far end so took a pic of that too. 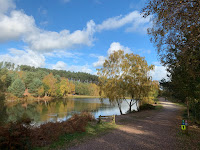 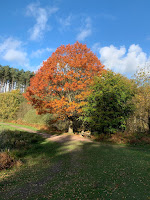 I got to the end and picked up my medal, beer and flapjack.  I've stopped drinking again so I daresay Mattgreen will get to drink this beer at Christmas.  I'd forgotten, but when I signed up you could opt out of a medal and goody bag in exchange for planting a tree.  I obviously couldn't do that (I need the medal to make it count for the challenge and who turns down flapjack?). But there was a sign on the table saying I'd paid extra to plant a tree as well.  I had totally forgotten this but it was a nice bonus at the end. 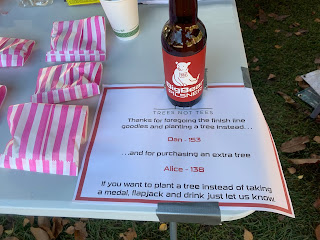 A day later I got an email from Trees Not Tees regarding my tree (!) which is now planted somewhere near Glasgow.  I generally am strongly in favour of trees instead of t-shirts and also instead of medals in any race shorter than a marathon.  I definitely think being given the option is a good idea.  I hope more races start doing this in future, especially large races where there's a lot of waste.

I wanted a finish line photo but couldn't get the angle right for a selfie so the kind man at the aid station put gloves on so he could take this for me with my phone.  I bought a reusable race cup as they had some nice ones and waited to watch Dan and Rob finish. 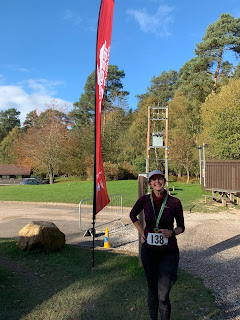 Sadly just before I left I checked my email and got a notification that my next marathon (meant to be on Sunday) had just been cancelled due to Covid.  Arrrggghh!