This was my first official race after a very long enforced break (7 months!) thanks to Covid-19.  Since my last official race I've run 12 solo marathons just to keep my hand in, but I was definitely ready to earn some new medals.

I saw a link to this race on Facebook a few months ago and thought it looked like a nice day out. It was designed to be Covid-friendly and promised a refund if cancelled.  I knew when I booked it that it was the same weekend as the Isle of Wight marathon, but given IoW was a large road race, I pretty much assumed it would be cancelled.  Spoiler: it wasn't.

I prepared for the race by having a mega-stressful week at work - my boss was off, we were already carrying a vacancy, the caseload has gone a bit mad because of Covid 2 - The Return Of Covid. Much overtime and working outside my comfort zone followed.  I did no running all week because I was exhausted.  The day before the race I got up at 4:30am to pack and then lead Project Awesome before going into work for a few hours.  Ian picked me up from work and we drove through the pouring rain to Wendover.  The weather forecast was truly grim: 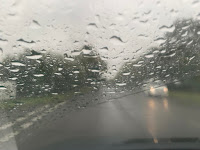 On the drive down, my brain provided me with reasons not to take part.  "It's more important that I finish the Isle of Wight.  Running is meant to be fun, what's fun about running through mud and rain for hours?  You've had a hard week, you could just have a nice lazy day in bed and then go and do Isle of Wight.  This is going to be really grim, are you sure you've done enough training?  You've not done hills for ages.  There's a weather warning for floods you know".... and on and on and on.  I told Ian he just had to get me to the start line in my kit no matter what, and I would take care of the rest.

The next morning I felt quite a bit more cheerful, though annoyingly my legs felt slightly sore from overdoing the squats at Project Awesome - oops.  My mum sent me a message that made it sound like I was going to a funeral rather than enjoying my hobby:

After a slightly stressful attempt to drive down a single track lane to find the place, we arrived at the start.  To my surprise it wasn't actually currently raining (though it had rained all yesterday and overnight) but was just really misty instead.  That tiny light in the photo is the huge bright light outside race registration, shown in the next pic, which was only about 100m away. 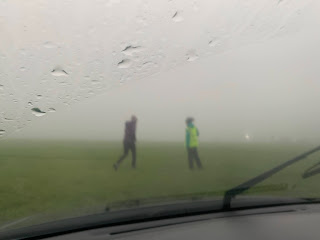 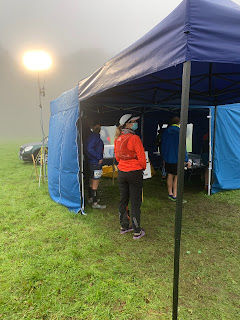 This was the queue to start, with runners setting off every 20 seconds to aid social distancing.  I was having Garmin problems as the start and finish were right on top of each other so it kept completing the course before I even began!  I started at around 8:30am as I was mindful we were booked on the Isle of Wight ferry at 7:30pm so it would be helpful if I could finish in less than 7 hours. 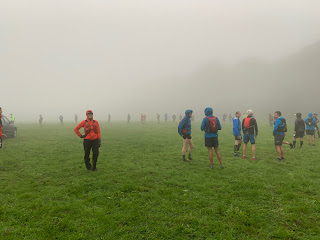 Ian took this slightly eerie pic of me setting off alone into the mist: 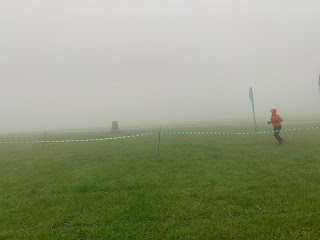 The race was proper trail right from the very start.  I knew a lot of it was in woodland which I was trusting would help minimise the effect of the rain.  It sort of did and sort of didn't.  This picture was taken near the start by the race photographer and I love how atmospheric it is! 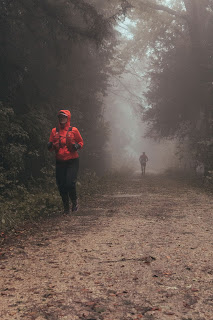 The rain started within half an hour of setting off and didn't stop for hours. 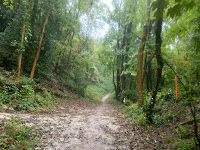 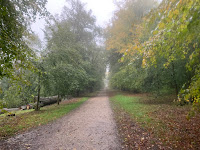 For the first few miles, I was being overtaken approximately every 20 seconds by all the runners behind me.  I walked every hill, and tried not to worry about what anyone else was doing, reminding myself that they probably didn't have another race tomorrow.  Around about 7km in, I got into a rhythm and started to feel OK.  I realised that if this was one of my multi-days, I'd be quite happy just pootling along through the woods on my own and that I should really try and make the best of it as there's not many trails like this in Liverpool.  I got to a place with a bench and a viewpoint, though sadly I think the mist took away from it slightly: 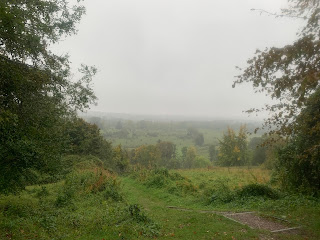 The race goes through Tring and first passes over a busy road and then past Tring station, where you had to be lucky to avoid getting a free shower from the cars passing by: 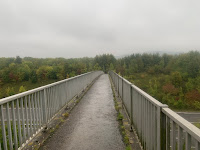 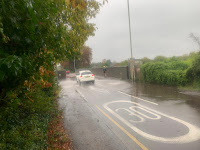 I had cunningly put my phone in its waterproof case prior to this race (this was an exceptionally good plan, as was wearing waterproof socks (Sealskinz) without which the whole day would've been a much grimmer experience).  Nevertheless, by the time I got to the chalky hills up to Ivinghoe Beacon, my phone was dying a death.  My hands were wet, the screen was wet, all my clothes were wet so I had no dry surfaces to dry anything on.  I couldn't swipe, it couldn't recognise my face, I couldn't click on the photo button.  Much swearing ensued.  Eventually I managed to get it to take these pics, just as I came out onto the open tops, with the wind whipping across at 45mph and the rain lashing down: 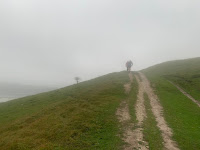 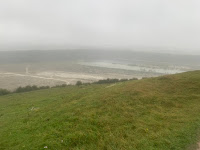 The hills were steep and there were quite a few of them.  People were coming back in the opposite direction thick and fast by now.  They'd already been to the turnaround point and were on their way back.  One of them warned me to be careful of the chalky slopes because they were very slippery. 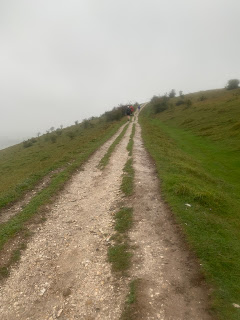 When I finally got to the top I spent several minutes wrangling with my phone and some tissues so I could take a picture at Ivinghoe Beacon.  Visibility was terrible and the wind was truly horrific so I didn't hang around.  In the back of my mind I was still thinking about finishing in time for the ferry crossing, and also I started getting cold the minute I stopped so I decided to just crack on. 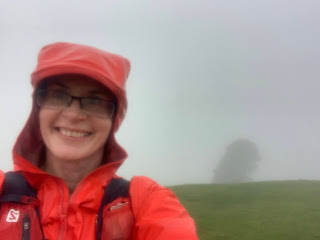 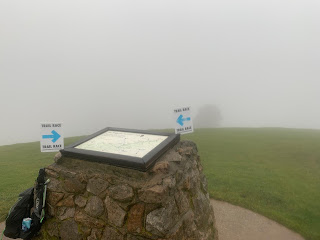 On the way back I discovered there were only 5 people behind me.  One of them was a girl with an injured knee who I'd overtaken some 30 minutes ago, she told me she was just hoping to make the cutoff.  This reassured me that I would make it as she seemed to know what she was doing.  I had skipped the first check point and all I'd eaten was a sausage roll that Ian gave me.  All my food was in a dry bag inside my sodden vest but I forced myself to make the effort to open it and retrieve my Dolly Mixtures.  These sustained me all the way to the next checkpoint at 24k, the half way point.  There are no photos because the rain was just too heavy.  I saw another bloke slip over and I helped him up and rescued his hand sanitiser from where it had slid down a bank and we ran together for a little while.  The rain, the narrow trail, the low number of participants (105 in the ultra) and the staggered start didn't lend itself to finding people who were a similar pace as me to run with so I ran the vast majority of this race alone.

At 24km, after a field of bulls (!) I came to the second checkpoint.  Ian was waiting there for me and I stopped for at least 10 minutes to try to sort myself out.  I huddled under a sloping roof next to a wheelie bin, where I stripped off my waterproof trousers, jacket and t-shirt and changed into dry ones.  I drank tea from a flask Ian had brought.  I ate a whole flapjack.  Ian reported he had found somewhere in Beaconsfield that could sell me a cable for my bone conduction headphones so I put them on.  I took 2 paracetamol, scanned my wristband and took some chocolates and headed out for the second half.

I took this pic to show how phenomenally well signposted this race was.  I don't think I've ever done a race that was better.  There was red tape (to the left of the picture) and signs at every possible turning, and often "wrong way" signs - which twice saved me from heading off in the wrong direction.  There was a GPX, updated with the covid-changed route, which was accurate, and marshalls at key turnings.  Even the graphic design on the pre-race info was on point.  There was a pre-race briefing on Youtube which was succinct and clear and spectators were made welcome throughout. Results went up the same day.  I couldn't recommend Runaway Adventures any more highly!  Massive thanks due to the team who de-flagged the course after - that must've been quite a job. 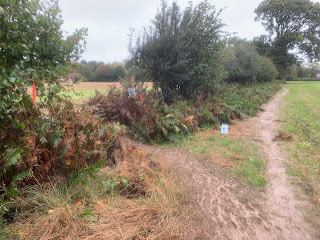 The mud and water however - I failed to take pictures of the worst of it due to phone issues, this is just a mild taster.  Suffice to say all of my kit needs a good wash.... 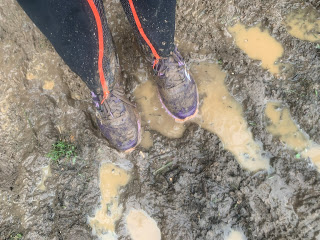 As the race continued, I gradually overtook people.  I was quite enjoying myself now - getting from 25k to 30k was quick and easy and I always feel races are easier once you're past that point.  The rain had eased off and eventually stopped completely and I could even see some bits of the countryside. 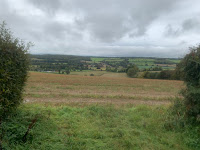 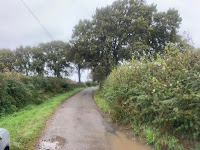 I think this might be the view from that viewpoint that was all mist earlier: 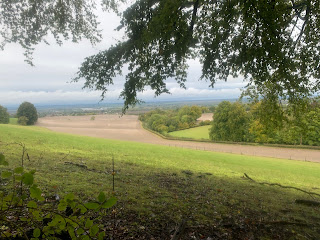 There was one more checkpoint at 38km outside a pub.  Ian was there and had brought me Coke which I drank enthusiastically.  I swiped my wristband and set off to get this done. My legs were really sore at this point - definitely not used to those hills. I remember chatting to someone who told me the race had been postponed from May, which I hadn't realised.

I can't really remember the last few miles of the race.   There was nobody around.  I just plodded on. 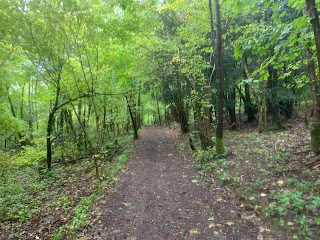 Finally arrived back onto the field.  Other competitors who were getting into their cars stopped to clap, the race volunteers clapped, Ian took photos.  The race director himself gave me my medal (still wrapped in plastic) and I thanked him profusely for a lovely race.  I finished in 6:56 - pretty much dead on my estimate.  Looking at the results afterwards there were at least 12 people behind me plus all the people who didn't finish, so as usual my ability to maintain a (slow but steady) pace for hours served me well. 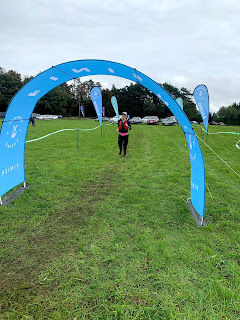 Ian took this lovely photo of me and then I went and stood behind those toilets in the background and stripped off all my wet kit for the second time today.  I put on some warm clothes and went to get a cup of tea and a pizza from the local vans that were on the field - both of which were amazing. 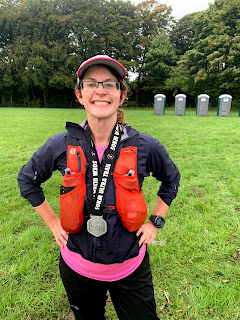 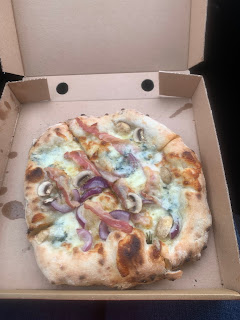 We managed to get the car out of the mud-infested field without getting stuck (unlike some people) though the car got pretty muddy during the experience... 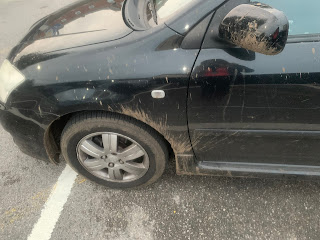 Ian then kindly drove for several hours down to Portsmouth.  We got there early so I hobbled around Gunwharf Quays food establishments wearing my medal and begging them to let us in (everywhere was fully booked).  Eventually Cafe Rouge took pity on us and I got a hot sandwich before getting on the ferry.  Finally arrived at the guest house on the Isle of Wight at about 22:00 and finally got a shower slightly after.  It had been a loooooong day.  Now to do it all again tomorrow (!)
at October 03, 2020