Today was the last marathon of 2020.  I've managed 23 this year, which isn't bad.  10 of them were actual real races - but this one definitely wins the Best Medal award.  I've never done a Christmas-themed race before so it's nice to get one of those in too.  This was rescheduled from November which is the quickest reschedule ever, but this company (Zig Running) run dozens of races a year. 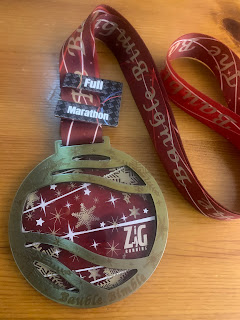 Here I am at the start.  Note the pink and blue toilets in the background (!)   The race was held at a horse racing track and it was pretty chilly at the beginning but luckily I arrived with only a few minutes to spare so there wasn't too much hanging around. 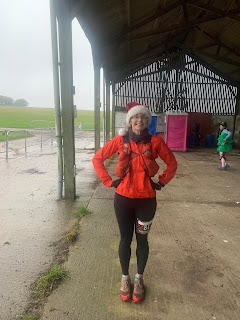 The race director was a pretty friendly guy - I'd already had a laugh with him about his blue Everton Christmas hat (he reassured me it was actually a Spurs Christmas hat - okay) and the race briefing was a pretty funny affair.  He told us to make sure we exposed ourselves to Graham every lap (Graham was keeping track of how many laps everyone had done as there was no chip timing).  He also highlighted all the people doing the double marathon (there's another tomorrow), pointed out the lady doing her 300th marathon (!) and the people with a film crew as they were training for Marathon des Sables. 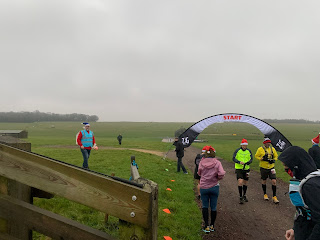 Without further ado we set off on the 8 lap course.  It was a pretty cloudy day, drizzling mildly.  Cambridgeshire is generally pretty flat but this course wasn't - there was a walkable hill each lap plus quite a few gentle slopes both up and down.  The views were all much like this: 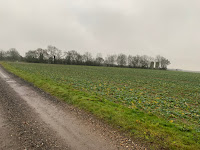 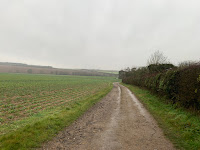 There was something growing in the fields by the side of the path. Not sure what... possibly cabbage? 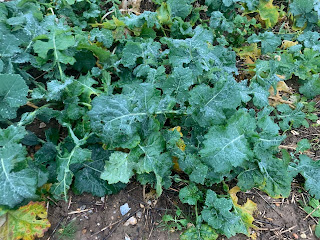 By the second loop it was already raining quite heavily.  I got chatting to a nice lady called Jackie from Norfolk, she was an ultra runner and told me a bit about the race I'm doing in Norfolk in May.  I'm signed up for the standard marathon but there's also a 32 mile and a 86 mile - all along the coastal path - apparently it's very beautiful so I'm considering upgrading!  She also told me about another company (Ultra Challenge) who do 60ish km ultras so I'll have a look at that too.  You get the best recommendations from other runners!
Meanwhile, it was still raining... 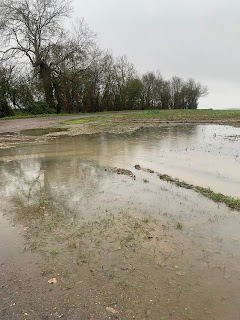 Towards the end of the fourth loop, I got chatting to these two.  Kerry is running 100 marathons before she's 50 (it was going to be 50 by 50 but she's already smashed that)!  I told them about my challenge and we ran together for a bit. 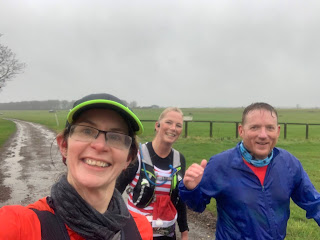 I lost them after a while, but they later overtook me again, then I overtook them again.  We must've been quite a similar pace and I got to see them again at the end when we'd all finished.  I told them about my blog and I've looked Kerry's page up on Facebook so if you're reading: hi!

This pile of hay bales was near the beginning of the course, which by now was getting a lot muddier. 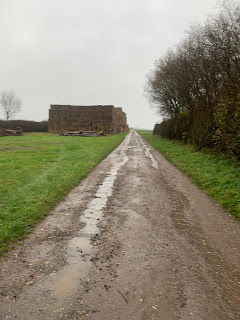 But the really muddy section was about a third of the way round.  There had been a post on Facebook saying that the course was muddy and to wear trail shoes - GOOD ADVICE.  I brought these and my white (!) Asics gel nimbus, which would definitely never have been the same again had I worn them today! 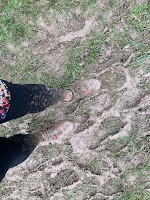 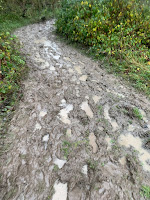 I just jogged through this but I saw plenty of other runners skidding and sliding.  The Marathon des Sable lads did in in road shoes... lol.  You may be hardcore but my advice is the classic Scouting "Be prepared" :)

By lap five I'd given up on the Santa hat as the bobble was dragging me down and was quite grumpy about the weather.  It hadn't been forecast to rain but it was absolutely relentless and all my clothes, trainers and gloves were soaked.  I couldn't stop because it was too cold and there was still more than 15km to go.  It's fair to say I wasn't feeling the love at this point. 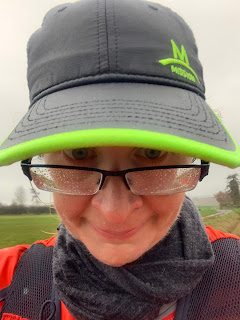 Luckily if you just keep going eventually something changes.  By lap 7-ish, the rain had stopped (mostly) and I was feeling much more positive. 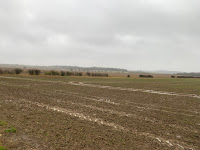 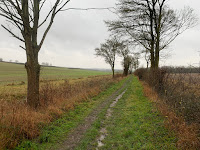 On the final lap I stopped to take some pictures of these crab apples - the stream wasn't here earlier which shows how much rain had fallen during the race! 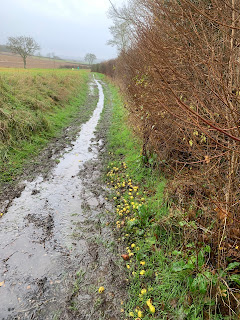 Here I am coming into the finish line: 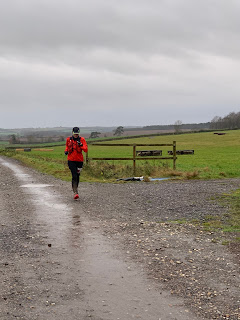 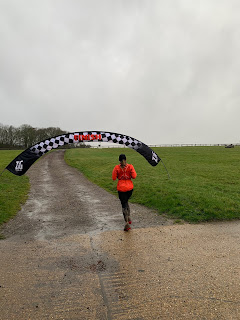 And here I am with my medal.  They provided real coffee from a proper machine at the finish line (the first decent cup of coffee I've had since arriving in Cambridgeshire!) and a mince pie.  I had a bit of a sit down and took some photos: 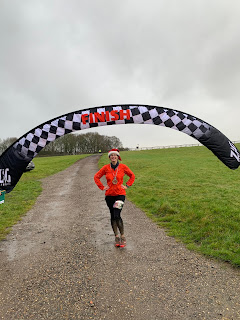 This was the state of my (black!) leggings and trainers at the end.  I was sitting in the barn at this point but as soon as I left to walk to the car I started shivering really badly.  It's a short route to hypothermia being out in December in soaking wet clothes... 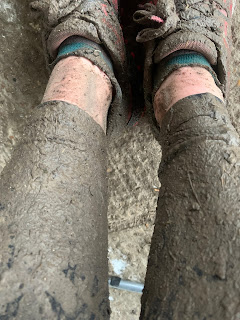 One last pic of the lovely medal with the Santa hat on.  I was really happy here!  So glad this race went ahead especially as it looks like my next one is going to be cancelled because of Covid... AGAIN.  Ahhh! 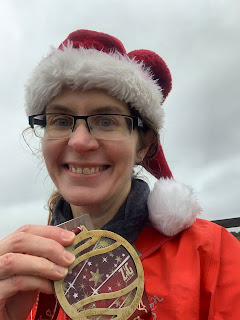 Finished in sub-5 hours which isn't bad considering the hills (446 metres!  Gah!  Definitely not flat!) and the rain and the mud.  Well organised and a fun day out.  Driving home tomorrow in torrential rain is probably going to be less fun but hey ho.  It was worth it! 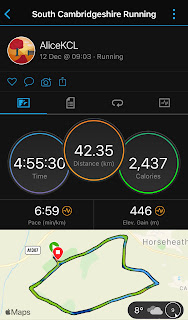