This week's race was a huge improvement on last week's.  Not only did I have enough sleep the night before, it was also a mere 2 hours drive away so I only had to get up at 6.30am.  Luxury!  It was billed as a Hallowe'en themed fancy dress marathon so I'd been to the party shop last weekend and bought this amazing outfit.  Last night I tried it on properly for the first time.  It was surprisingly comfortable.  As soon as I arrived I spotted a few guys from Penny Lane Striders, my running club.  I didn't know them (they're much faster than me) but we had a quick chat - they were doing the 32 mile ultra. 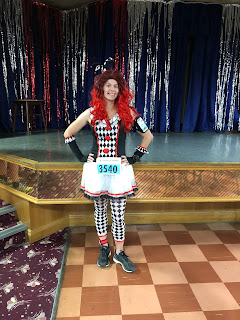 The timing chip was attached to a sort of ankle bracelet that made me feel a bit like I had an ASBO!  The start line was a 10 minute walk away so I didn't have long before it was time to get down to the canal.  Here I am at the start line.  As you can see my hair is fricking awesome. 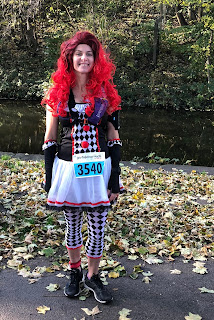 I suddenly noticed that not many people were in fancy dress.  As in, less than 10%.   The last fancy dress marathon I ran was Marathon du Medoc, where just about everyone was in fancy dress, so I started to wonder whether I'd gone too far.  Oh well!  Too late now! 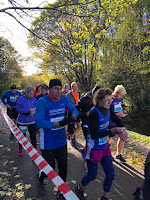 We started running.  It was nice.  It was a cool day, but sunny, which it turns out is perfect for running in a giant wig.  My hair bounced up and down as I ran.  It felt like a bizarre and possibly slightly inappropriate cross between Baywatch and The Little Mermaid.  The route was very beautiful. 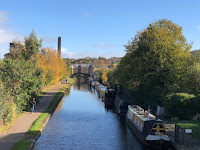 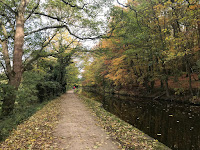 After less than a kilometre, I was right at the back with a couple of chaps, who I think were called James and Paul.  We had a great time talking about running and all the races we'd done.  Paul was on his 97th marathon with a goal of getting to 100 by the end of the year.  He'd done Medoc 3 times so we talked about that and gave advice to James - this was his 4th marathon but his first one off-road.  The time passed quickly.

The route was a 10 mile out-and-back away from Leeds, followed by 3 miles out-and-back towards Leeds.  This worked really well as it naturally broke the race into four sections which seemed very doable. 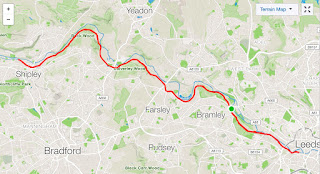 As we approached the end of the first section, there was no sign of last week's demons. 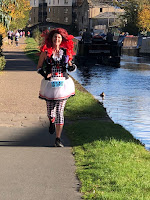 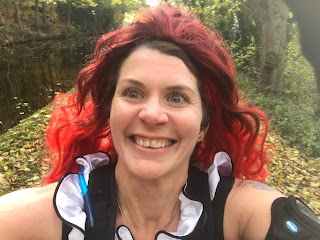 I turned around and started the 10 mile section back.  Not long later, I lost Paul (James had got ahead of me a while earlier) so I put on some music and kept going.  Lots of random passers by smiled at me and wished me luck or commented on my hair.  It was around this point two of the Penny Lane Striders guys went past me, in second and third place!  I ran past a sewage works, still smiling...  The sky was blue and the route was pretty.  I'd been led to believe that canals are hard/boring - not true!  I met a lovely lady called Hils who was 77 and had run 64 marathons and was hoping to get to 100 before she was 80.  What a legend.  I love people like that, so inspirational.  I hope I'm still running marathons when I'm 80.  I overtook quite a few people on this leg, as I ran through the water stations and up the (tiny) hills. 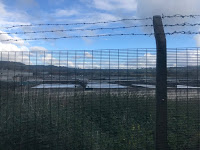 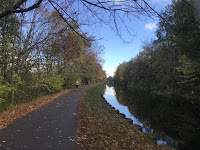 The sun finally went away and it started to rain as I approached the start/finish line before the second out-and-back.  Luckily it was just a shower.  I stopped for a bit of Mars bar before tackling the final section.  I was still smiling, still loving the wig as I set off along this final section.  I'd once done a training run along this bit when staying with friends in Leeds so I was excited to come across some familiar sights.  Sure enough, after about 4k I suddenly started seeing things I recognised. Round about now I saw James coming back the other way.  He was on track for a PB!  The two Penny Lane guys also passed me, now in 1st and 2nd place in the ultra, brilliant work guys. 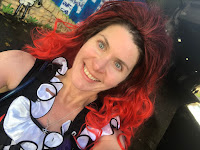 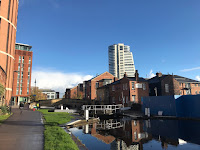 I reached the turnaround point, had a chat with the lovely volunteer and then headed back for the final stretch.  When I was at about 40k, my mum randomly phoned me.  She didn't know I was running a marathon and had called to ask me what "dual factor authentication" was on her iPhone, but kindly chatted to me for the next couple of kilometres to keep me company.  This really helped pass the time and we said our goodbyes when I was about 1/2 kilometre from the finish.  Whilst I was chatting to her, I saw Paul for the last time, heading out on his final section.  Here I am approaching the finish line: 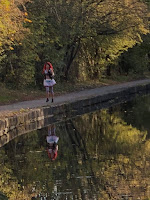 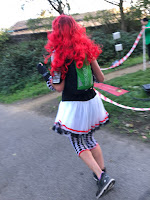 I crossed the line, about half an hour faster than last week and got given my medal and goody bag.  This is the first race I can ever remember where I was given my medal in my hand rather than it being put round my neck.  I'd never thought about it before but I missed the symbolism of it, it's somehow not the same putting your own medal on.  Anyway.  I put it on and had a lovely post-race photo taken.  Really enjoyed this race and the organisation and staff were lovely, I'd definitely do another It's Grim Up North event. 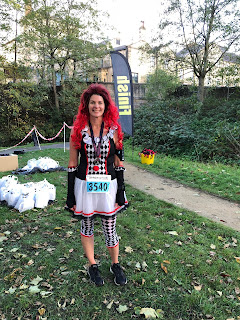 And then I went to Starbucks and had a cup of tea and got changed, and while I was in the bathroom I had a proper Hallowe'en surprise when I took my sock off and found my foot covered in blood.  I hadn't realised anything was wrong but I think I must've had a long toenail which cut into the toe next to it.  Not sure my sock will ever be the same again!  Luckily my foot is absolutely fine! 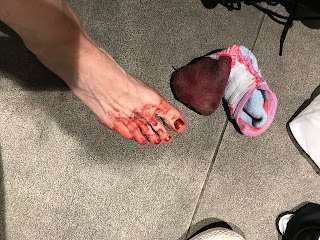