I've learned a lot about counties and their boundaries whilst doing this challenge, and Bristol is particularly interesting. I thought it was part of Avon, but in 1996 that was split up into different parts.  The ceremonial county of Bristol is now very small, encompassing basically just the City of Bristol and a small surrounding area (the tiny purple section on the map).  As a result none of the 'normal' marathons I could find actually crossed the county boundary. 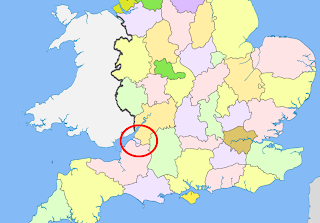 This race is strictly speaking an ultramarathon, although at 30 miles it's really not much longer than a marathon.  There was a 45 mile version, but as I'd promised I wouldn't run any ultras this year (hahaha that hasn't really happened) I was trying to be restrained.  In any case, I'd read the comments from previous years - by all accounts a mudbath - and steeled myself for what could be a brutal race on difficult terrain.  It had a 9 hour cut-off which is always slightly worrying, and the weather forecast at the start of the week was absolutely horrendous (torrential rain from start to finish).  Hmm.

I took the afternoon off work to drive down to Bristol, which took 5 hours.  When I packed, I planned to use half my suitcase for running stuff, the other half for non-running stuff.  Then I ran out of room for all my trainers so my non-running stuff was cut down to just the stuff in the red circle, haha.  And they say you don't need much kit for running! 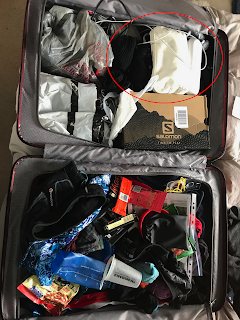 The race started at an incredibly civilised 11am.  This was because the 45 milers started at 8am but it meant I got a lie in, a nice relaxed breakfast AND arrived early (shock horror) with plenty of time for registration and chatting to other competitors.  Unfortunately, despite having already having gone to the toilet, I decided I needed to go one last time and as a result missed the start by about a minute - here's a picture of me sprinting off trying to catch the tail end of the pack... 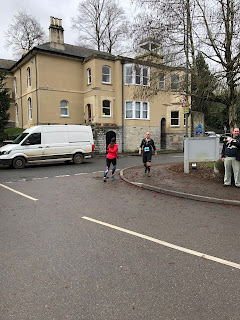 I quickly did catch them and over the next 10km gradually overtook people until I settled into a comfortable pace.  The trail was quite muddy in places but there were also quite a lot of tarmac paths - I was glad I'd worn my hybrid shoes.  Ian was following me in the car and we'd agreed to meet at around 10k.  Unusually, we somehow managed to miss each other (not sure how as we're usually pretty good at this stuff). 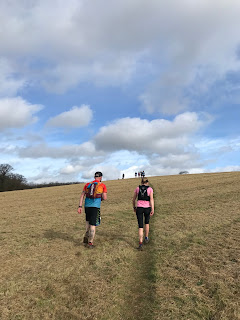 Nevertheless I was in good spirits, and soon got to the 20k checkpoint.  I have been known to have "Hollywood" checkpoint stops where I sit down, faff around, eat loads and generally waste time but today my goal was to get in and get out and I stuck to it.  I filled my bottle, drank some Coke and grabbed a bar and set off (meanwhile Ian missed me again as he was struggling to find anywhere to park - there were people and cars *everywhere*).  Luckily he caught up with me about 10 minutes outside the checkpoint and we walked up a hill together chatting.  After I left him, the trail was quite twisty and turny for a while before heading back into the woods.   The girl in front of me in this picture was from Good Gym in Bristol (along with quite a few other runners and supporters) and had recce'd the entire route.  A couple of times she shouted, "I think it's left here" or "take the upper path" saving me much stress and wasted time!  We talked for a while, she was really nice and she overtook me a couple of miles from the end for a strong finish. 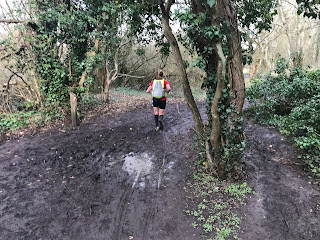 Having not looked at the course at all, I was surprised when we ran first alongside a motorway and then over it on a narrow footbridge.  I think it was the M5?  We later crossed another motorway - the last time I remember doing that was Convergence - so it had good novelty value! 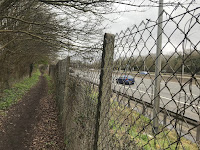 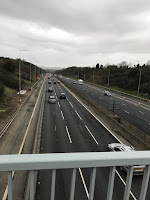 Just after this I saw Ian again briefly and he took this pic: 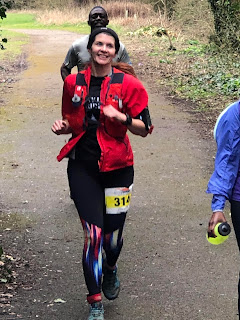 Almost immediately after there was a gigantic hill.  The view from the top was lovely but I had minimal time to appreciate it as by now it was approaching 3pm and I was keen to avoid the rain, so I was trying to get a move on. 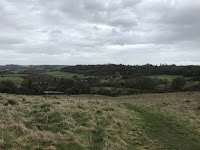 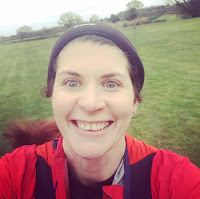 A little while later I saw a runner from the 45 mile race, struggling to walk.  He explained his legs were hurting and I gave him a paracetamol, I'm pretty sure I saw him at the end so he must've dug deep and found extra reserves.  He asked how far to the next checkpoint and I said 6k as I was pretty sure it was at around 40k.  To my surprise, it was actually only about 3k and was mixed in with another race which had spectators galore, taped race area, loads of shouting and clapping, people wandering around with prams and cups of coffee and in the middle of all that was our checkpoint.  Ian was there too.  I found the situation quite stressful  (especially as I'd run nearly a marathon at that point and couldn't deal with hordes of people) and was keen to get out as soon as possible. I just got a cup of tea and Ian and I started walking.  The route was difficult to see and it was hard to know which marshalls were ours and which were the other race so both me and the girl in front got a bit lost.  We found our way into the woods and there was a muddy hill to climb, then we had to run on the same course but in the opposite direction to the other runners (!) for a short section before one of their marshalls sent me up another hill. 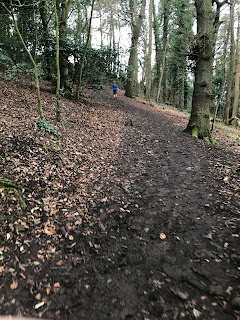 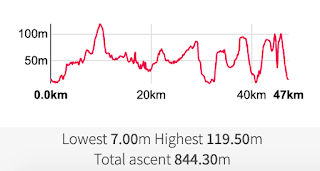 As soon as it levelled out I came across a runner sitting on a bench being sick.  We've all been there and I asked if he was OK/needed anything and he said no (in truth, he probably just wanted everyone to stop asking if he needed anything)!  I saw him at the end of the race, he finished only about 10 minutes after me, looking a bit peaky but he still did it, kudos.  I ran onwards and caught up with the girl in the previous pic, her name was Lindsey and even though she'd run quite a few ultras, multi-days etc she had not been having a great day today.  She was doing the 45 miler and she'd had a rough time between miles 16-25, it reminded me of the horrible time I'd had at Suffolk.  Lindsey told me she'd started off with the 9 hour pacer but that he'd gone so fast that she hadn't been able to keep up and lost him, which is always depressing.  We chatted away about this race, other races we'd done, our lives in general and ended up staying together for the last 10k of the race.

It's always lovely having someone to run with but the timing was particularly brilliant.  We kept each other going, chattering away.  She told me we were going to go over the Clifton Suspension Bridge, which I didn't know, and then it appeared and she waited while I took this photo: 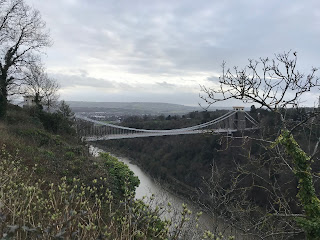 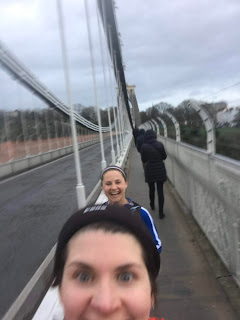 From there it was just a little way further to the end, and despite my navigational confusion adding on a few more metres (I still owe Lindsey a Calippo for that!) we got there.  I urged her to go ahead and have her moment of glory then I followed her through the finish line 20 seconds or so later. 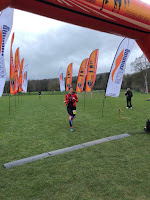 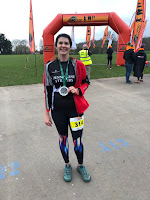 We had a hug and were all smiles with our medals, and she told me she'd finished 1 minute shy of 9 hours, "who needs a pacer?, it was a lovely moment.  I also found the Good Gym girl and we had a hug too - sadly I didn't know her name!

I'd started 3 hours later so my time came in at 5:57 with a moving time of 5:40 which means I was successful in my quest to limit stops to the bare minimum (17 minutes over 6 hours is good going).  It really was a very pretty route and I thoroughly enjoyed myself.  And the rain held off too - which was definitely more luck than judgement! 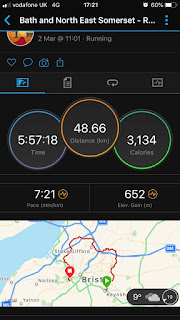 I got another giant shiny medal for the collection, a nice green T-shirt and they even provided a hot meal.  As I walked towards the canteen, I saw another runner who I recognised - it was the lady who'd finished just before me at Convergence!  We had a little chat and she'd got a trophy so she must've done well today.  Ultra running is such a small world and it's always nice to catch up with people you've met before.

And that was it!  We went to a fun, quirky, restaurant called Zaza Bazaar and even saw a Banksy before driving home through Storm Freya.  Happy days! 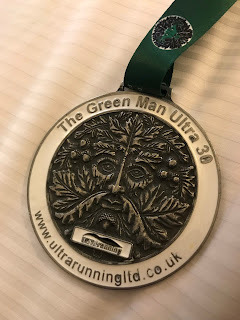 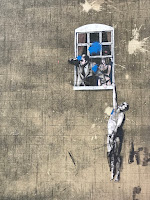