It's as good as it sounds - this race was chocolate-themed!  It had a chocolate-themed aid station, a chocolate-themed medal and a chocolate-themed goody bag - living the dream!  I decided after Bristol that I needed another race before my ultra so I signed up the evening I got home from Green Man.  I told my mum about it, she told my cousin Ellen, then Ellen emailed me to ask if she could run a lap of it with me.  We haven't seen each other for years: my most recent memory of her son is as a toddler - he's 19 now!  My mum and I came up with a cunning plan to enter her into the race as a surprise.

Then, a couple of days before the race, I received a message from a friend at running club, asking if I was doing a long run at the weekend.  Her daughter Megan is running the London Marathon and doesn't like doing her long runs alone.  I agreed Megan could come and do the first 3 laps with me, meaning this was the first marathon since Brighton where I'd had company the whole way round.

Here's Megs and I looking nice and fresh at the start line: 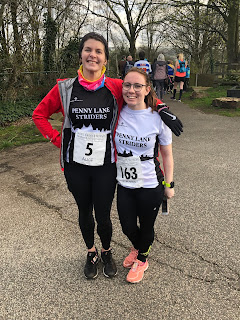 The race was a series of out-and-backs along an old railway line, making it probably the only flat marathon in the whole of South Yorkshire.  Each full loop was 6.5 miles, with the first half-loop being 4 miles then going past the aid station for another 2.5 mile loop.  This meant there were potentially eight opportunities to eat chocolate!

We started off slowly and got slower in true ultra-runner style.  Megs had a few niggles and also wanted to stop and take pictures - understandably as it was very pretty.  Weather was also lovely considering it was March! 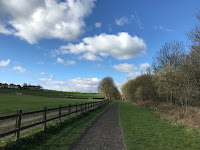 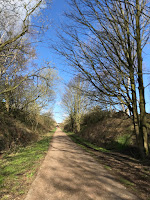 Megs was impressed I could take photos on the move, although as you can see, not that well... 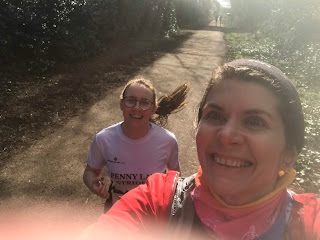 We stopped after the first half-loop for water and the loo, and by the time we'd completed the second half-loop (6.5 miles) we were already 90 minutes in.  Concerned about the timings, I decided to pick up my rucksack and speaker from Ian at the aid station, as music can be a welcome distraction.  Megan and I had put together a playlist in the car on the way over, and I whacked that on and we set off.  Megs immediately picked up the pace from 9 minute kilometers to mostly 6 minute kilometres (!) and this time didn't want to stop at the halfway point.  At some point on this lap, somebody asked us what race we were doing.  I stopped, looked at Megan and my mind went completely blank.  I said, "errrr....." for 10 seconds before I remembered.  The passerby looked at me like I'd lost the plot - who runs a marathon and can't remember what they're doing?!  There wasn't time to explain this was already my 4th this year.  I said to Megs, "At least you won't have that problem when you're running London marathon!"  We pressed on to finish the second half-loop and stopped at the aid station for some chocolate delights: 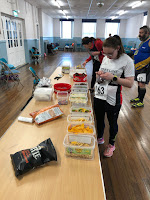 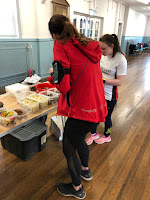 They really did have everything.  White and milk chocolate mice, chocolate stars, crisps, jelly sweets, loads and loads of chocolate (and other) homemade cake.  Local races are absolutely the best for this stuff.  The race was advertised as "not having any healthy stuff at the checkpoint" and I can verify this is absolutely accurate :)  I managed to wolf a whole slice of coffee and walnut cake before we headed out on the third lap.  Megan's longest ever training run had been 17.5 miles and by the end of this lap she'll have done 19.5 miles.  So far she was holding up brilliantly and still smiling!  I instructed Ian to wait for my cousin Ellen in the car park and get her registered and we would pick her up as we passed the aid station for the second half of the lap. 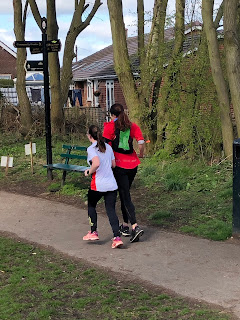 Not long after we started the lap, I saw one of the more curious sights of my running career - a pig being taken for a walk on the course: 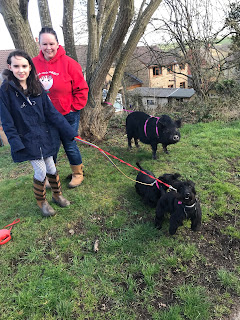 At first I thought it was a dog, especially as the two dogs in the foreground were barking, but no.  It was an actual pig.  We stopped and took this photo.  This is what I love about marathons - pretty much all of them have something unique and memorable!  Never seen a pet pig before!

Here's another selfie of us looking quite cheerful, I think this was also near the beginning of loop 3. 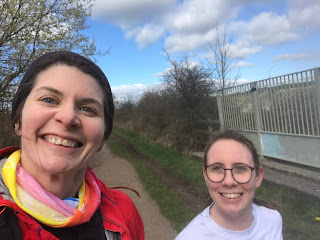 Shortly after this we passed a man wearing a t-shirt saying "12 marathons in 12 months".  I commented to Megs that I'd only managed 9 official marathons last year, and the man overheard and told us he was currently attempting "52 marathons in 52 weeks".  We ran alongside him for a while and he told us his story - he said he was currently on 24 marathons and it was only week 20 so he is a little bit ahead of the curve.  I love these stories - it reminded me of the chap I ran with in Worcestershire - it really is so inspiring.

As we approached the end of this half-loop, Megs again said she didn't want to stop.  She had 4km to go and when I told her this, she said, "Four kilometers is nothing!" -- impressive words for a teenager who'd just run 18 miles, the furthest she'd ever done in her life!  Ian and my cousin Ellen were waiting and after some brief hellos we all set off together.  Ellen and I chatted, she told us how she'd often been running here when she used to live locally.  By the time we were on the home stretch, Megan was starting to get tired so we tried to motivate her with the lure of medals, chocolate and a sit down. When we got to the checkpoint, her Strava said she was 19.7 miles so she did loops of the car park until she got to 20 miles - well done Megs, you were awesome.  We waited to watch her get her medal - which had a special badge attached to say it was a PB as it was her longest distance ever! 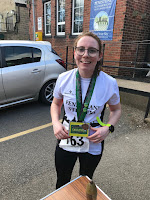 Then Ellen and I set off for the final lap.  Ellen had only been planning to do one 6.5 mile loop, which had now turned into 9 miles due to the extra half-loop, which was the furthest she'd run in a year (oops! sorry!)

We had a lovely time.  The pig had vanished (though it turned out later Ellen knew the pig-owner!) and we caught up on where we were at in our lives and all our family news.  It was lovely.  Running is ideal for chatting as there's nothing else going on to distract you.  I listen better and talk less when I'm running.  Perhaps I should have all my important conversations that way, haha.

By the final half-loop we were both feeling tired but we ploughed on and before long the aid station came into sight and it was all over!  Because it was a 6 hour race, you have to ring the bell to let the organisers know that you're finishing.  Ellen and I rang the bell: 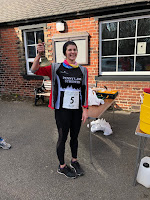 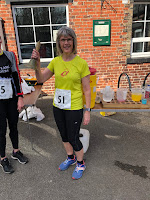 And both got our medals: 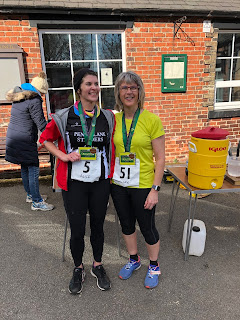 After that we got changed and had one more photo altogether before heading to the pub for some food before the drive home.  One of the lovely things about races like this is everyone can do the distance they want to - I did a full marathon (actually 27 miles - gotta love the bonus mile!), Megan did 20 miles and Ellen did 9.  Thank you both for coming to join me. 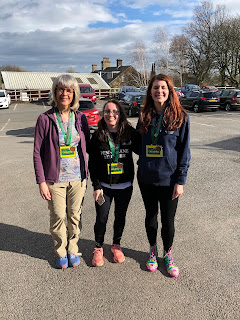