Sometimes I feel like I'm invincible.  I've run a dozen marathons this year, I've run four ultras, I've run all day in scorching heat, I've fallen in a swamp, I've lost half a dozen toenails, I'm badass.
Here's what I learned this weekend..

1) Do not go on holiday and do absolutely no running for the two weekends prior to your race
2) Do not work all week in a busy hospital and then drive for 7+ hours on a Friday evening
3) The night before your marathon, do not have no food until 10pm and then carb load on a Filet o' Fish and chips at Maccy D's (the face shows exactly how thrilled I was) 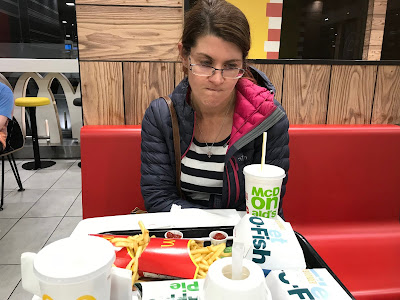 4) Do not arrive at your hotel just before midnight 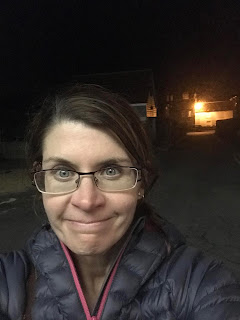 5) Do not book a hotel room with a green emergency exit light that shines in your face all night and wakes you up 1000 times
6) Getting up after 5 hours sleep at 5.45am is not conducive to feeling fully rested 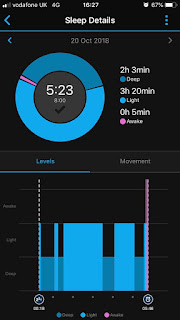 7) Stay in a hotel which is able to provide adequate quantities of coffee at 05:45.

Apart from that, I was absolutely raring to go!  Here I am at the start line looking absolutely thrilled... 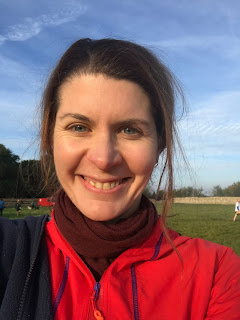 The set up was pretty sweet - smooth registration, friendly volunteers, free Tribe bars, nice coffee van.  I picked up my number and listened the race briefing - so far so good.  I declined the (included) race t-shirt on saving-the-planet grounds (they were generic Endurancelife shirts) and felt suitably angelic.

There wasn't too much waiting around before we set off - first along a boardwalk section with grassy reeds on both sides.  The reeds were so high that at times I couldn't see where my feet were landing.  I found myself breathing hard - it takes concentration to run like that - and hoping the whole route wasn't going to be along similar lines!  Soon it opened out onto the only truly 'coastal' section which involved running a short distance along a beach: 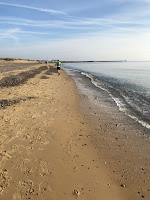 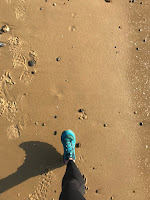 The path then undulated through woodland, and then out onto the big wide expanses of open heathland with little streams running alongside the path.  I was plodding along, just thinking, when suddenly around the 10-11k mark I realised I was quite near the back.  The race was small (<100 runners in the marathon) and I couldn't see anyone else and that's when the demons set in. 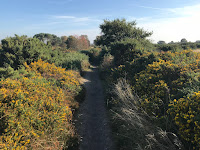 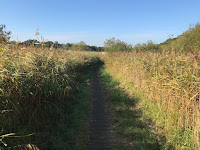 Battling with the demons commenced.  "Why are you even bothering?" said the demon.  "You may as well withdraw now if you're already struggling...  You think you're so great but you can't even run 10k without huffing and puffing?  No wonder everyone else is already ahead of you".
I sighed and gritted my teeth.  This was going to be a long day.
The demon was only just getting started.  "You're shit!" it cackled.  "You might as well drop out at the next checkpoint.  Then you can go home and have a rest, you're much too tired for this!"
I considered my options.  I could put on my headphones and drown the demon out.  This does sometimes work, but other times it just shouts even louder.

Instead I decided to invite it in.  "Hello demon," I addressed it. "Can I offer you a drink?"  "A DRINK?!" screeched the demon.  "Yes!  I'll have a large glass of wine," it sneered, wickedly, knowing full well that I'd only given up drinking alcohol a week ago.  I rose above it.  "So.  What is it you came to talk to me about?"

"You're SHIT!" shrieked the demon.  "You're a slow, rubbish, useless runner and you're already struggling.  GIVE UP!"  I reminded the demon that I'd run two marathons last month and that I'd pushed through plenty of difficult races before.  Silence.

A few moments later, the demon screeched, "You're fat though!" I was taken aback, but calmly replied, "I could do with losing a couple of kilos, but I have just come back from holiday.  There's plenty of people heavier than me have finished marathons.  And there's no way that's going to stop me," I told the demon.

The miles passed.  The demon produced ever weaker excuses; I shot them down.  Nevertheless, I was tired.  My preparation for this race was suboptimal and it showed.  I tried to work out which of numbers 1-7 above was having the worst impact (answer: number 6). 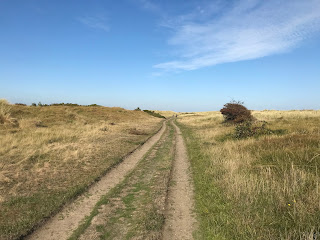 The trail was pretty.  I overtook some kids doing D of E carrying huge backpacks and quietly swore to stop moaning about the weight of my vest.  At one point I passed a bunch of runners going the other way, at first I thought they were faster marathon runners doing an out-and-back loop.  A few said 'well done' and I thought they were taking the mickey before I realised they were actually half marathoners (hence why they were so fast!)  I missed my turn and added 1/2 a km before a kindly spectator pointed out my error: "You're meant to be over there!" -- oops.

At checkpoint 3, a lovely volunteer shouted at the top of her voice, "COME ON RUNNERS!  YOU'RE ALMOST AT THE CHECKPOINT!!! YOU'RE DOING BRILLIANTLY!!!" which was hugely motivating.  I ate jelly babies.  I plodded on through the woods.  As usual, it took until 30k before I felt sure I would finish, and after that it was (mostly) plain sailing.

There was a particularly unpleasant gravel section just before 40k at which I finally accepted there was no chance of finishing under 5 hours, followed by a horrible deep sand section. 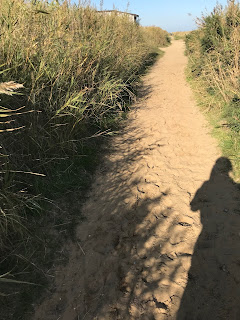 If you've ever run on energy-sapping sand, you can imagine my joy to come across it at this point in what is now a very warm race.  The pièce de résistance was coming across a sign that said, "1 MILE TO GO" just as my Garmin ticked over to 42.2km.  So I'd run my marathon, and now there was a mysterious extra bonus mile.  Oh deep joy.  I finally finished in 5:23, almost exactly an hour slower than Berlin a month previous.  Terrain, temperatures and demons were all difficult today.

Mandatory finish photo (oh yeah, and the medal was TEENY TINY and exactly the same whether you'd done 10k or an ultra - a pet hate of mine.  Grrr!) 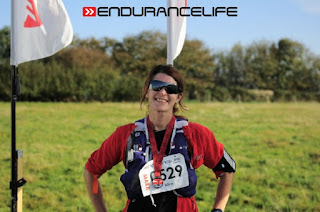 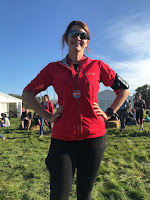 Drove back to Dunwich, had a shower, ate a giant portion of fish and chips and an ice cream, had a nap, then got back in the car less than 24 hours after arriving and drove all the way back to Liverpool. 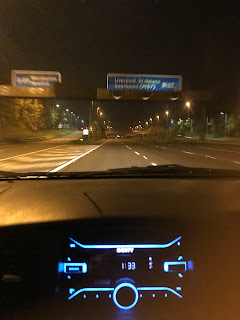 I learned this weekend that I'm not invincible.  Here's a little piece of post-race wisdom: 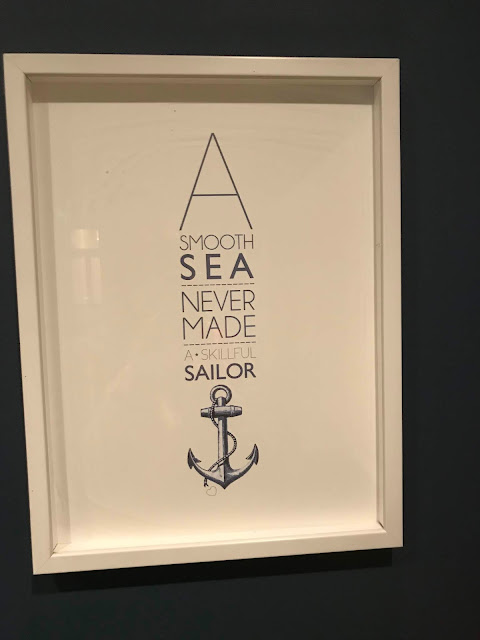