I first met Elise on a train to Yestival in 2015.  She was about to run around the whole of the UK, I was (unbeknownst to me at the time) about to sign up for my first marathon.  By the following year, Elise had completed her 5000 mile journey; I'd run four marathons and signed up for a double marathon.  She helped me realise that anything is possible provided you just get on with it (and eat plenty of cake).  Our paths have crossed at various points over the years and on one of these occasions, she suggested Shires and Spires would be a good race for my counties challenge.  So when I signed up for it, I sent her a message and she decided to sign up for it too, along with her Dad and her friend Emma.  And so it was I found myself driving to Northamptonshire on a Friday afternoon for a weekend of sunshine and trails.  Elise's parents had kindly offered to put me up so we had a lovely evening chatting about past races and eating as many carbs as possible.

The next morning after a hearty breakfast we set off for the race.  Race day weather was predicted to be warm and sunny and it was gorgeous even before the race began. 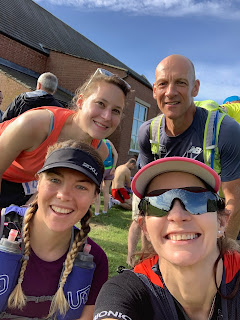 We set off pretty quickly and although it was initially downhill, I could tell I wasn't going to be able to keep up the pace for long.  Elise and her Dad are both much faster than me so after a mile or two they disappeared into the distance.  Emma and I tried to convince ourselves, "we might catch them up later" ... I'm sure you can figure out for yourselves how successful that was! 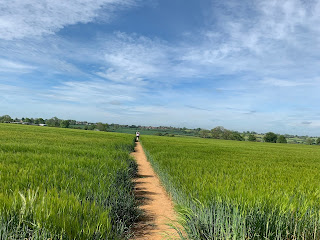 Northamptonshire countryside definitely did not disappoint.  The only bit of Northamptonshire I really know is Northampton town centre so the bar was pretty low - none of this race looked anything like Northampton!  Early in the race we were already running through fields.  The race was a mix of road and trail - at first I thought I could've done it in road shoes and I probably would've got away with it - but there definitely were a few lumpy sections. 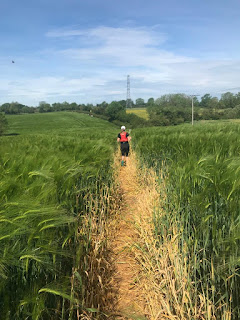 Emma took this photo of me disappearing into the distance, I think this was just before the first checkpoint.  These were evenly spaced throughout the course.  The first two checkpoints were in slightly odd locations (on the corner of a junction, with cars coming in multiple directions).  The volunteers were helpful, filling up bottles for me and generally being cheerful and the homemade cake was much appreciated.  However they didn't have any Coke, once we realised there wasn't going to be any at any of the checkpoints this obviously triggered a massive yearning! 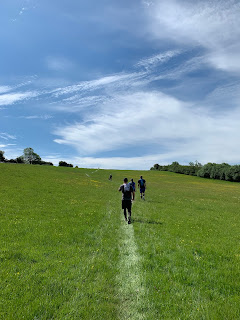 The course was unmarked and we went wrong a few times.  Luckily I never go too far wrong before realising thanks to trusty Garmin.  There were lots of hills which we walked.  There was one section where we went totally off course and tramped through a field completely unnecessarily. 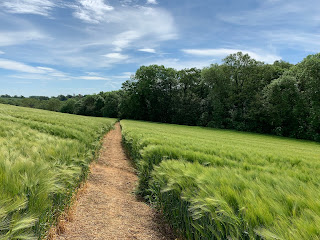 The time was passing really quickly because Emma and I were chatting and sharing previous race stories - this is hands down my favourite thing to do during a race.  Emma is running around as many islands as possible - which sounds like a fantastic idea.  Since the race we've been chatting and we hope to do the epic Anglesey Ring O' Fire race together (after I've finished my counties).  It's rare you meet someone in an ultra who matches your pace so well - I think she could've gone a bit quicker than me, but I'd just run 150km the previous weekend on Hadrian's Wall so maybe if I'd been a bit better rested we'd be even better matched.  I feel certain we'll bump into each other again at some point as we've got much in common in our running 'history' (neither of us have done a hundred miler yet, but we've both done 50+ miles a few times).

My parents had kindly offered to come and cheer me on and I knew they would be somewhere around the halfway point.  This picture was taken by my dad as we approached them across the golf course. 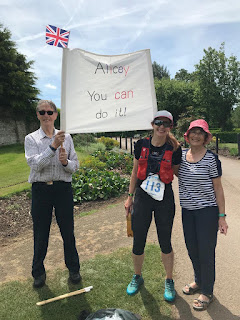 And here I am with my Mum and Dad (thanks to Emma for the photo!) My parents originally made the banner for my first marathon in Paris and I think this is the 5th time they've dragged it out of the loft now.  Making it worth the effort!  Apparently the golfers complained that my mum was making too much noise encouraging the other runners (!) and she was putting them off their swing.  When I told Elise's dad about this later, he said, "It's not exactly the Open is it?" which cracked me up.  My thoughts exactly! 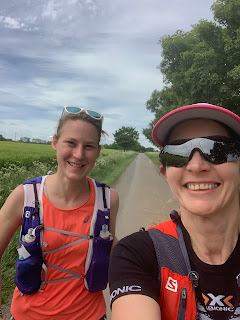 We kept going.   Elise's mum Julie had waited for us at checkpoint 3 which was lovely of her - she told us Elise and Dave were about half an hour ahead of us.  We kept going some more.  By checkpoint 4 it was getting even hotter.  Because the route includes a loop, you could see checkpoint 5 (ten miles ahead) from the previous checkpoint, which was a little disheartening.  By this point we'd also realised we weren't going to finish under 7 hours, though neither of us was particularly bothered.

I was starting to feel a bit tired at this point and hunted through my vest for anything nice to snack on. I didn't feel like eating but came across a couple of Caffeine Bullets so we had those. (They're sweets with caffeine in them - much more pleasant than gels and more practical mid-race than a cup of coffee).  Emma told me that when she first heard about them she thought you put them up your bum and made some comment about not being that desperate.  This completely killed me and I could hardly run from laughing, it's actually making me giggle again now thinking about it.  It's totally believable because they're in these black/red wrappers and they're called BULLETS and !! oh my days! 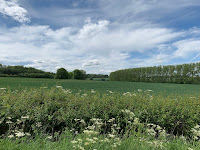 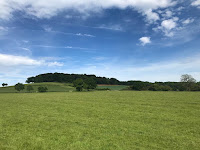 After the final checkpoint there was only about 8k to go, with a bit more pretty countryside to end on.   The very last stretch was up a hill, Emma and I valiantly ran it having walked the hills all the way round.   We crossed the finish line in 81st and 82nd place in 7 hours 44 minutes. 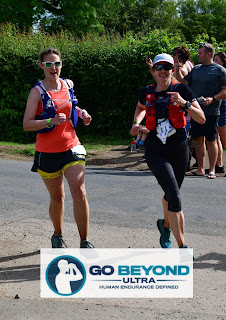 My Garmin reckoned it had been 57km and 800m of ascent.  The average temperature was 28 degrees, with a high of 32 degrees.  I drank approximately 2.5 litres of water and another litre of electrolytes.  I'd put suncream on but sweated it all off (I now have some very silly tan lines also) and look at that salt!  Yuk!! 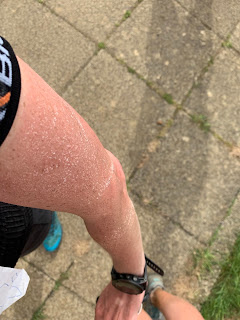 We got our medals and lay on the grass for a bit chatting to Elise and Dave who'd already finished, before going inside to wash the salt off our faces and get a Coke.  Imagine our disappointment when there wasn't any Coke left, only Diet Coke.  I had a Magnum instead and then we took some photos, note Dave photobombing us in the first one! 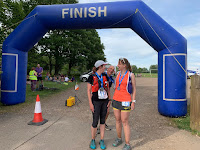 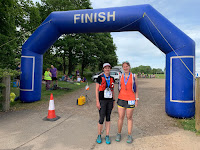 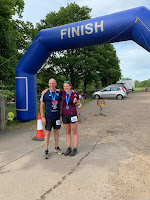 After that it was time to drive back to my parents' house for a lovely shower and dinner and an early night. (I stopped at a garage on the way home for Coke and they didn't have any Coke either! What is the world coming to?  I had to settle for cherry Coke... disgraceful).

The next day we were going out for a special birthday lunch with my mum, but then STUPID Liverpool FC had to go and ruin it by beating Spurs in the Champions League.  This meant a STUPID victory parade, which meant I wouldn't be able to get anywhere near my flat at 5pm, which was the time I was planning to get home.  I had no choice but to miss the lunch and leave early so I could go and rescue Iz from Lime Street and then barricade ourselves indoors.  My food shopping delivery was cancelled, there were STUPID Koppites everywhere, I could still hear them even with the windows and curtains closed.  If I ever hear that stupid Allez song ever again it will be too soon.  COYB! 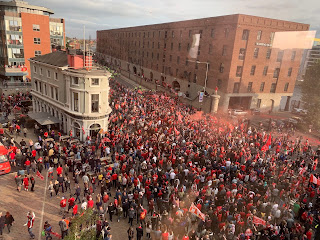 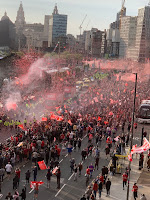