It's been a while (well, 2 months) since my last race and a lot has happened.  Training has been a bit hit and miss, with three weeks where I barely trained at all thanks to work-related hassle, a week skiing and then getting Covid.  I wasn't that ill with Covid but I only stopped testing positive two weeks ago and have really struggled to build back up to any sort of distance prior to this race.

Then the day before the race I had yet more work-related drama and was feeling really upset.  I put a brave face on it and went to stay the night at my parents because it would've been too far to drive from home.   Luckily they were quite good at cheering me up and distracting me so I managed not to think about it too much and had an early night.

I got up early and headed off to the race which was now only an hour away.  I was feeling very sad and when Ben rang me I was a bit tearful and pathetic and told him I really didn't feel like doing a race today.  Nevertheless, I got there, got my number and changed into trail shoes on the advice of the person next to me in the car park.  It was cold and slightly raining, which wasn't exactly helping my mood.  I stood under the race gazebo, staring at the rain, feeling morose.

And then I saw a bloke with a tiger on his head.

I know that tiger.

I met Tim at Rutland marathon in 2019.  He'd run 46 marathons juggling then.  Today was his 63rd marathon juggling, or jogling, as is the official term (portmanteau of jogging+juggling).  Rutland was my 22nd county.  Today, Leicestershire was my 42nd.

Last time we'd run almost the whole marathon together so I was immediately cheered to see him.  I didn't really want to spend the whole race thinking about work so was extremely happy to abandon that topic and instead talk about running, all the races we'd done, how we planned to celebrate the end of our respective challenges, and so on.  Just like at Rutland, Tim's jogling was a total show-stopper and other runners, walkers and dog owners frequently made comments, clapped or stopped to take pictures. 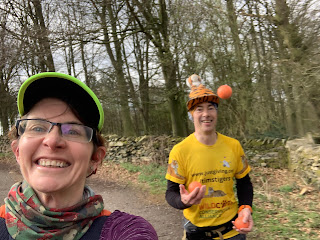 At one point we passed a party of schoolchildren and their teachers who burst into applause and started cheering for Tim as we went past.  This happened on more than one occasion (as we were doing loops) and I definitely felt the benefit of reflected glory! 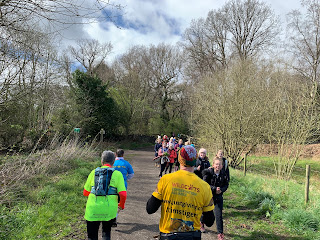 We talked about Tim's fundraising (obviously he's raising money for tigers - here's the link:  https://www.justgiving.com/fundraising/timstigers if you can spare a few quid, please do.  I'm going to go to his 100th jogling marathon as it's lovely to celebrate these milestones and one of the best bits of running is meeting interesting people.  We have added each other on Strava now so I can keep an eye on how he's doing.

The loops sped by.  I probably ran faster than I would've on my own - Tim is a pretty speedy marathon runner who can do a 3 hour 40 marathon without the jogling, whereas I am not.  I need him to juggle to slow him down enough that I can stick with him, and he says it takes the pressure off, so it's win-win!

On the way round  we had a good conversation about Green Magic, which are a health food/nutritional supplement which comes in the form of a green powder.  Tim had seen an advert for it and had signed up for a year's supply at £20 a month.  My dietitian sense started tingling, and when he went on to say it was full of superfoods like spirulina and wheatgrass, it went into overdrive.  Poor Tim got cross-questioned about his oral intake and then lectured that his magic powder was almost certainly useless and he should try probiotics and fibre for improved gut health.  Having now had a chance to review the nutritional content of Green Magic (0.3g of fibre per serving), there's more fibre in a bag of crisps (0.9g)!  Compare that with milled linseed which has a whopping 2g per serving. Don't get me started!

We also had a long conversation about running poles - I've never used them before but as I have a VERY hilly race in Cornwall coming up I'd asked for some for my birthday.  They arrived last week and I'd decided to bring them to this race to try them out, but thought I'd get them out after a few loops in case they were annoying.   Tim had used them a lot in mountain races and said they helped a lot, which was positive, but also said that adjustable length ones were better (mine aren't adjustable) and that it was best to get cheap ones as he'd broken quite a few (mine were horrifically expensive and better not break - although it did say on the packaging that due to being lightweight they were prone to breaking).  Arrrghh! It's funny how runners are easily parted from their money by the promise of powder that makes you healthier and sticks that magically zoom you up hills.  We both saw the funny side!

I decided I'd get them out of the car after the 4th lap and change back into my road shoes at the same time.  By the time I'd got sorted he was well ahead of me and I never managed to catch him up again. 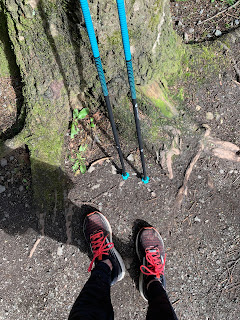 The park was called Beacon Hill Country Park and there was one big hill at the start of the loop, followed by a couple of smaller inclines and then almost the whole of the rest of the route was downhill.   I'd watched some videos of how to use poles which I tried to copy, but found my legs were too long (or maybe my arms were too slow)?  In any case I got into a rhythm that seemed to work on the uphills.  They seemed easier because now I could push myself off.  The downhills were trickier, because they weren't really steep enough to need poles (and possibly also what Tim said about needing longer poles on downhills... gah!).  The main problem was the loop was so short (3.3 miles) it wasn't worth folding them up again, so I just carried them in the assembled position the whole time.  OK in a quiet country park, not so great in a busy race when you're poking people's eyes out.  Apologies in advance to the residents of Cornwall, I'm going to be a menace. 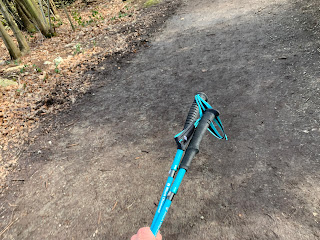 The weather was a bit hit and miss.  Some sections were sunny, often it was pretty mild but there was one particular section which was horrifically windy every time I did it, and often seemed to start raining as soon as I approached it and stop as soon as I got past it, hmm.  Here's some pics of the course - pretty standard country park stuff, nobody reads race reports to look at pictures of paths so feel free to scroll on by! 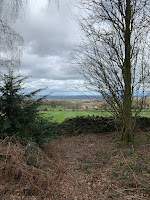 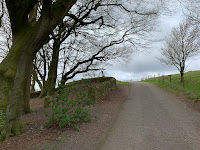 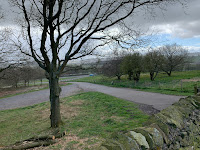 There was a canicross event at the same time which started just before the marathon, and had its own cute Dog Aid Station. 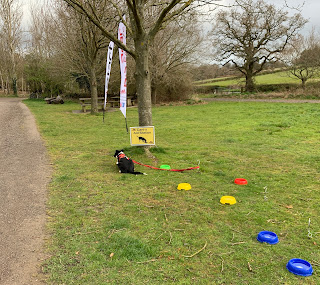 I had been worried I might not be able to finish in the time limit because of Covid and just generally feeling tired and not really hill trained, but I needn't have been too concerned.  I finished in just under 5 and a half hours, which was absolutely fine (there was over 1000m ascent too, though it didn't feel like it) and collected my beer and flapjack and medal.

Bumped into Tim again at the end and had another nice little chat - he hadn't realised I was behind him, so had sped up to try and catch me, and therefore the gap had widened further and he completed the second half 8 minutes before me. I also had a nice chat with the race director's mum, who remembered my counties challenge from last time and was encouraging me to do the Big Bear event in Bedfordshire.  I already have a Bedfordshire marathon booked but theirs sounds so nice, I might just do it anyway!

Then I went to the cafe for some actual food (I'd survived all morning on mountains of sugar) followed by driving to see my daughter who conveniently lives in Leicester.  Overall a most enjoyable day out which turned out to be a lot better than expected. 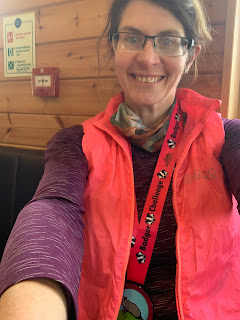