The latest in a long line of rescheduled marathons! This one was originally in November 2020, was postponed to April 2021, then postponed again to November 2021.  At the time I booked it I lived in Liverpool so it would have been a quick zip down the M6.  Sadly by the time it came around, I had moved to London and it became an epic, multi-part journey.  I’d been nursing a knee injury following my first 100 miler in October (not detailed here as sadly it didn’t have a medal therefore didn’t count towards my challenge).  Just to spice things up a bit, I also spent the night before at a party drinking copious alcoholic drinks and eating vegan food – both often a precursor of terrible GI problems.  Yippee!

Imagine my joy at 5:30am when my alarm went off.

Nevertheless, these marathons don’t run themselves.  I got up, drove for two hours, wrangled with the pay-by-mobile parking meter whilst only having 15 minutes to spare before the race started (STRESSFUL!) then ran to the start, which was through a huge dark tunnel with an epilepsy-inducing strobe light halfway along (just as well I’m not epileptic). 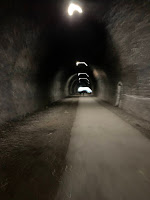 Whilst dealing with parking, I asked a passing runner if I needed to wear trail shoes (what with the race being called Tissington TRAIL) and they emphatically said no, so I attached the weird chip thing to my road shoes and hoped for the best.  I got to the start with about a minute to spare. 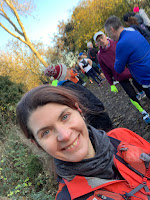 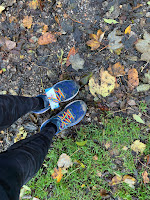 Due to my knee issues, I planned to take this race easy, so I set off at a comfortable pace and plodded along.  It was quite quickly a beautiful route, with lovely rolling Derbyshire hills and dry stone walls on both sides.  The “trail” was largely tarmac and the other runner had advised me well – trail shoes would have been Very Bad.  My knee felt fine, sadly my gut less so and despite my enthusiastic pre-race consumption of Immodium,  within the first couple of miles I had a couple of unscheduled but necessary stops. TMI?  Sorry. 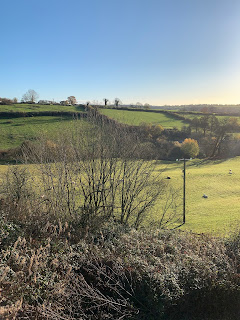 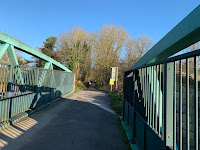 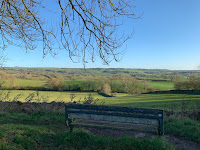 I jogged on.  The trail was ever-so-slightly uphill – this had been mentioned in the race notes but I had figured it meant “undulating” as nothing is ever JUST uphill.  It was a beautiful sunny day, but with a cold northerly wind.  Where the trail had trees on both sides, this was fine and lovely.  On the exposed bits, this was bloody cold.  I saw a runner in front of me put his hood up and followed suit, even though it wasn’t raining, to try to take the windchill off a bit. 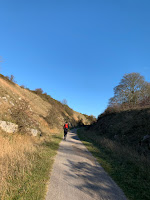 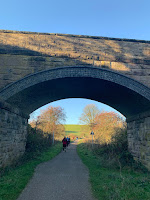 It said in the race briefing notes that the race was “trying to be more green.  Please consider bringing your own reusable cup or water bottle”.  This is pretty common these days – many races don’t provide any receptacles at all and if you forget, you have to buy a reusable cup at the start.  I think this is perfectly reasonable.  Obviously I have never forgotten – one good thing about always reading the race briefing! I'd brought a cup and 2 bottles and was pretty self-sufficient.  When I got to the aid station, this is what I found: 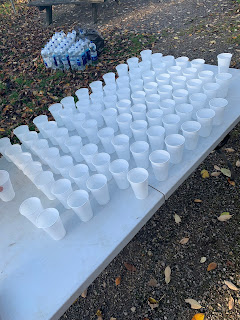 “Trying to be green”… not trying hard enough in my opinion!

I emailed them this photo after the race with my thoughts and the organiser did reply and said, “we would love to scrap the use of these plastic cups and this is what we are working towards”.  Fair play to them but they should just bite the bullet and tell everyone: there aren’t any.  Bring your own or buy ours, your choice!

The race continued, still slightly uphill the whole time.  As I turned a corner and could see ahead of me, I suddenly realised the route was actually climbing a pretty large hill but just really slowly.  Into a headwind. 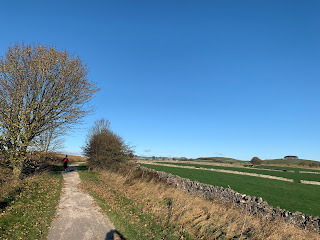 Halfway up the slow, dull, windy hill, I came across a dude walking these gorgeous beasts.  I thought they were Samoyeds so I stopped and asked him.  I was right. They were super-cute.  He let me take a photo of them. 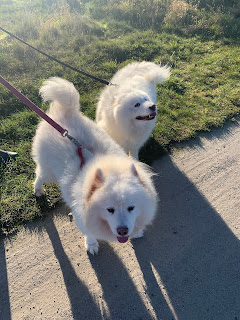 The other runners were quite spread out by this point.  I passed a guy with his hood up and we exchanged a few friendly words.  As soon as I passed him, I thought “he looked like that guy I met in Worcestershire who owned a chip shop” but I couldn’t remember his name.  I figured Derbyshire isn’t too far from Worcestershire and I remembered that he ran marathons every weekend – surely he had to travel for that?  I kept going and chatted briefly to another lady, mostly about how the way back was going to be so much nicer.  I stopped to take this picture because I thought the little lake was really pretty: 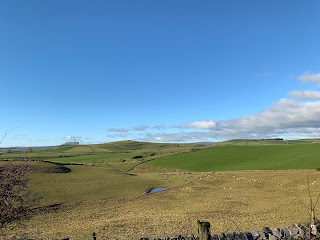 I passed a little roadside stall that sold cake and jam but at that point all I could think about was getting to the turnaround point and getting out of the damned wind.  Eventually I got there and there were lots of spectators, who clapped enthusiastically, despite me not having done anything impressive as yet, and a marshall, who told me where to turn around. 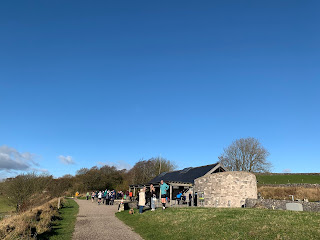 As soon as I turned around, the whole race got a lot more pleasant.  It was all slightly downhill, the wind abated and my speed picked up.  I passed a farm that supplied milk for Cropwell Bishop Stilton.   A bit further on, I passed a field with loads of men with metal detectors combing the field systematically.  I gave my romantic explanation to Ben afterwards that one of them had lost their beloved wedding ring while tending the cows, and he’d recruited all his friends to help him search for it.  Ben had a rather more prosaic explanation that they were hunting for something valuable.  Hmm. 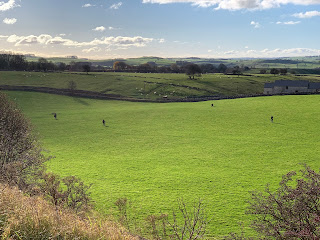 Shortly after this, I saw the guy I’d spoken to earlier coming the other way.  This time I was paying attention.  It really did look a lot like him.  As he approached, I shouted, “Do you own a fish and chip shop?!” and he shouted “I remember you! You had the speaker!” and I stopped and said, “I remember you too!” and totally instinctively hugged him, which was probably very Covid-inappropriate but he didn’t seem to mind, and I said “I haven’t got it today,” and then we both ran off in opposite directions.  He was probably a couple of kilometres behind me or else I would’ve waited for him.  It took quite a while before I remembered his name was Lucas.  I looked him up afterwards – he finished half an hour after me.  I wonder how many marathons he's done now?!

On the way back I took a photo of this sign, which was also present on the outward leg – it made me smile because I have run some races which have literally the most horrific mud/scramble/hills/brambles which don’t have signs like this, and this was literally nothing.  There was no part that was worse that what’s visible in this photo... 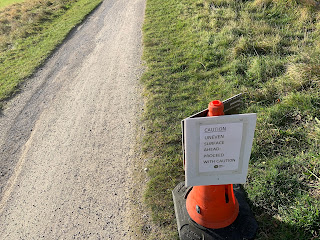 I kept going.  It was getting cooler as the course fell into the shade and I zipped up my jacket.  I felt great – no issues with my knee and I was doing a pretty decent pace by now.  I overtook quite a few runners including this guy wearing Zoom Vapor Fly shoes which made me feel like a bit of a badass.  Although that is probably a bit unfair - he was walking so likely injured.  Sorry dude.  I still beat you though :) 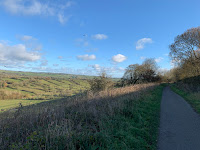 And that was it! I huffed and puffed the last couple of kilometres because I could and I was enjoying going fast for the first time in a while.  I feel like I finished with a MASSIVE negative split although I can’t prove it as I didn’t record it properly on Strava….

Literally the only benefit of an uphill first 13 miles!

There was a t-shirt as well as a medal – haven’t had a new t-shirt in a long time, so that was nice.  Cute medal as well.  Finished in 4:22 which is pretty respectable given injury and 300-ish metres of ascent.

And that was it!  I didn’t eat enough on the run and got a bit light-headed on the way back and had to stop for a very crap cheese pastie at a service station.  The end. 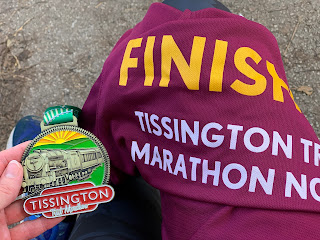 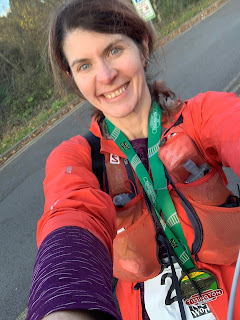