I'd been looking forward to this race for ages as I lived in West Sussex for nine years and this race is largely on the South Downs Way, which I ran last year.  It was going to be a glorious adventure!  But then Storm Jorge came along, and I knew from Iz's Scout hikes that the area was frequently a mud pit in March, especially after a fortnight of perpetual rain.  On the way down on the train, I saw this: 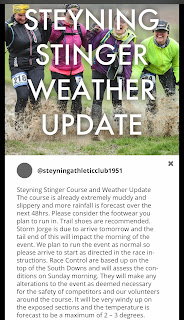 ... basically saying "it's going to be horrific".  Oh deep joy.  Ian and I had booked a couple of nights at super-fancy hotel South Lodge first so we had a lovely meal, a good night's sleep in a comfy bed and a morning jaunt around the muddiest bit of Sussex as a precursor: 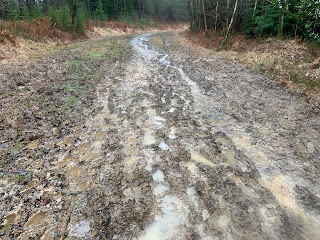 Later that day my lovely friend Cat came to visit and we drank wine, had facials and mooched around the spa.  That evening Mattgreen came for dinner in the pub and cocktails in the hotel lounge.  It was all gloriously civilised. 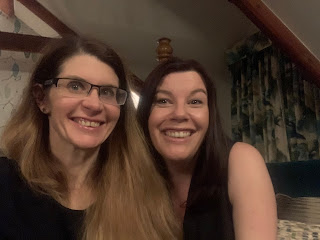 The next morning I got up early, reluctantly checked out and made my way to Steyning Grammar School.  Organisation was good and the event was sponsored by Clif bars, which I liked.   What I didn't like was the prospect of spending many hours running up and down hills in the mud in the rain.  Trying to fake enthusiasm: 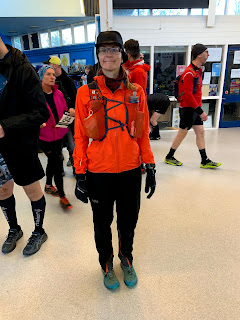 The one upside was they had given me the absolute classic running number 118.  This both guaranteed I wouldn't forget it and also gave me ideas for cool photo opportunities, as shown: 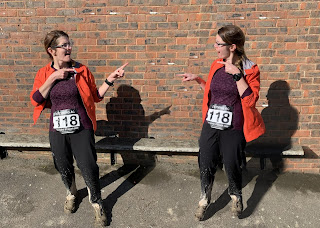 (Many thanks to Iz Green for the photoshop skills!)

The race had a somewhat quirky start in that it didn't have an official start time.  You could basically rock up anytime between 07:30 and 09:00 and just start running. This was weird as it felt like you were running by yourself.  Also, normally during a race, you naturally end up with a group of people who are around your pace who you overtake/they overtake you all the way through the race.  This didn't happen, as there could be someone who was your exact pace but who started 20 minutes later than you and your paths wouldn't cross all day.

The day was much nicer than predicted and within the first mile or two there were already hints of Sussex countryside loveliness: 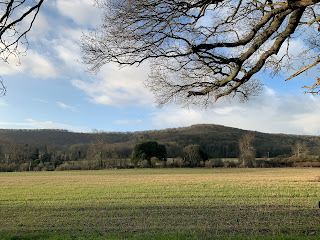 The weather forecast was much worse than the reality and I was a bit warm from the get go.  Blue skies and pretty countryside - I felt my mood lifting pretty early on. 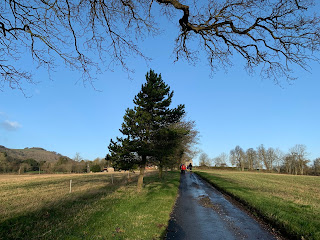 Nevertheless Sussex never fails to deliver on the mud front.  I was wearing new waterproof socks to try them out for Hardmoors and despite being filthy and having splashed through many (deep) puddles, my feet felt surprisingly dry.  Especially as my shoes had holes in them! 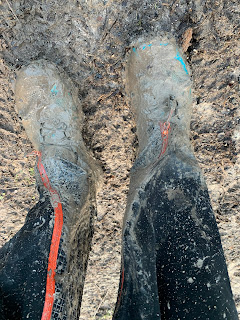 This picture was the one time the weather clouded over.  It rained, briefly, but I was in the woods at the time, and by the time I came out it had blown over never to be seen again... 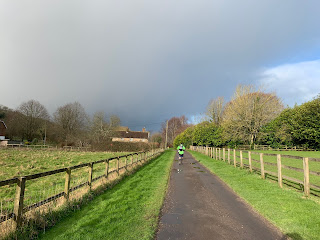 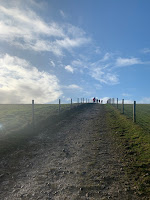 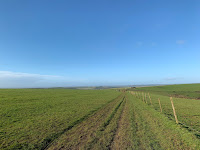 In the pre-race email it said, "Along with many other events we are looking to reduce our use of disposable cups. We would therefore encourage you to bring along your own reusable soft cup or water bottle to be filled at our water stations".

I took this at face value and duly brought along my cup.  To my surprise, when I arrived at the first aid station, I was very surprised that they had loads of plastic cups.  I was literally the only person I saw all day who'd brought a reusable cup.  I'm afraid I'm quite draconian on this one - there is no such thing as TRY to reduce plastic - you just have to DO it.  Tell racers there will be no cups and to bring their own.  Sell your own branded one at the start for anyone who forgets.  They'll remember next time.  The end.

This chap was probably regretting the decision to wear white shorts: 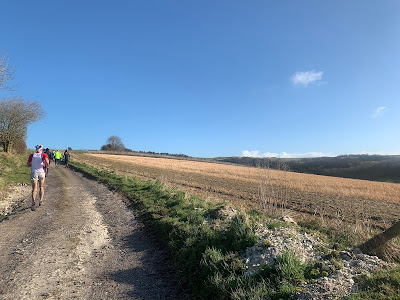 The race organisers had photographers out on the course who provided free photos, always a nice touch - thank you!  Here I am not looking too miserable as it was on a flat bit! 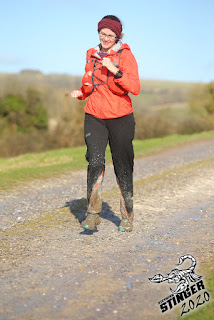 Somewhere around 18km, I saw in the distance the familiar shape of Chanctonbury Ring.  It was surprising how little I recognised about this route considering I'd run it before. 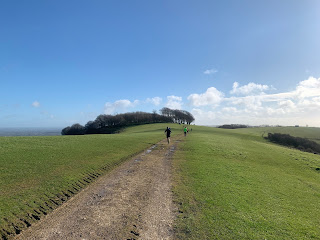 When I got closer I took this picture.  This is the 'wrong' side of the Ring - the other side looks out on glorious countryside and reminds me of the night Ian and I wild camped here without a tent and Ian woke up with a slug in his sleeping bag.  Also the time Ludo escaped here and disappeared over a hill beyond an electric fence whilst I shouted obsenities - ahh happy memories! 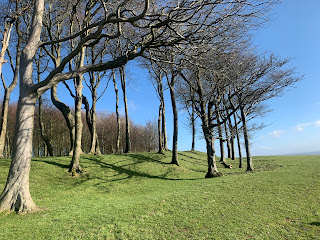 A bit later you do two small loops.  I overheard someone saying they were very muddy so I had that to look forward to.  I saw Ian at the start of the first and he asked if I wanted anything - I said COKE because there was nothing but water at the aid stations to drink.  He went off to search for it and I completed the loop and headed on to the next one.  Lo and behold, when I arrived he was there clutching a bottle of it.  Lucky me! 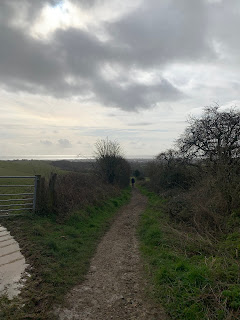 I ran some more.  Sussex was Sussex-y.  There were hills, but nothing too savage. 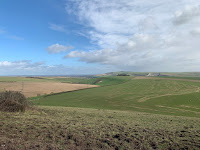 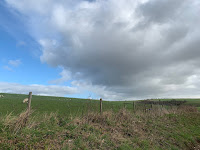 There was mud, but nothing unexpected.  In fact one chap told me he'd run a big chunk of this route 2 weeks ago and it was loads worse then.  Immediately after I took this picture I spotted a lady I'd been running with earlier, Sharon, who tripped on this mud and fell over.  We ran together for the next 10k or so. 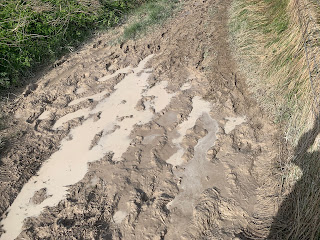 Here we are coming into the aid station at the end of the second loop.  She was from Horsham and had grown up children also so we had plenty to chat about! 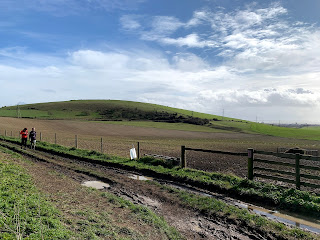 Here's another one of the race photos.  I had a hat at the start but it was too hot, so I took it off and then my hair kept getting in my face, so I used my buff to hold it back.  I do look a bit strange though... 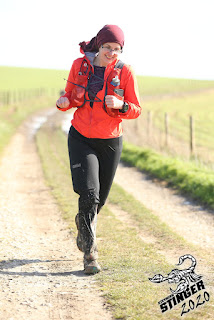 Race conditions were ideal by now, this is around the 37k mark.  I was feeling strangely comfortable, I'd been taking it easy all day and was feeling fine and cheerful. 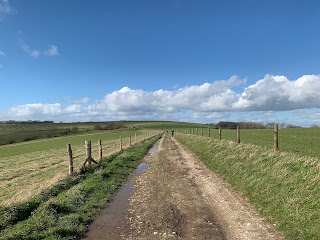 The last little bit goes through the woods and is quite pretty.  Here's Sharon and I (slightly blurry): 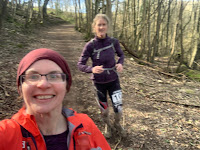 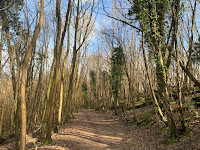 Probably about a mile from the end there is a horrifically muddy and totally impassable section without going straight through it.  Oh well!  Crack on! 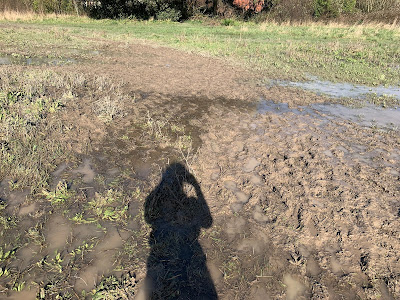 Here I am crossing the finish line.  Today's was a pretty slow, sluggish one, but with 991m of ascent and a significant amount of mud, plus having spent yesterday doing very little, I felt it was OK. 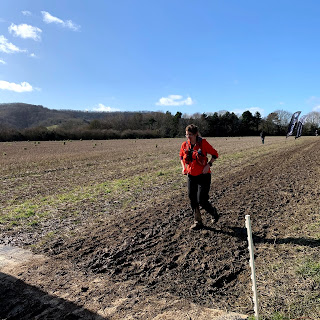 I waited for Sharon at the finish and clapped her in - when I saw the results later she actually finished 20 minutes before me as she'd started after me (!). Then I went straight to the showers, via the boot wash.  This turned out to be a lot of fun - look at the colour of my trainers under all that mud! 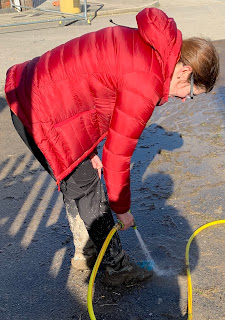 Another quirk of this race is it includes a free breakfast.  I chose the veggie option but still didn't much feel like eating it - I managed the bread roll and the baked beans and a cup of tea though. 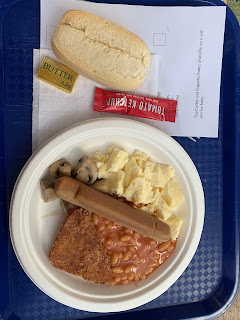 Here I am with my medal - they weren't given out at the finish but instead in the room with the breakfasts, so I didn't collect it until I was clean and changed.  The medal was small and has a really short ribbon - looked quite funny on big strapping men!  Overall a nice race - well signposted, extremely well marshalled and friendly.  Enjoyed it.