I had planned to do a Christmas-themed race for December (Rayne-deer run in Essex), but then sadly didn't actually enter it, and by the time I tried it was full.  Damn!  Cheshire is the last county vaguely near where I live in which I haven't yet run a marathon, and this looked easy, and there's not many marathons around in December so I figured it would be good to get one last county checked off this year.

Also, this would be my 20th marathon this year (always nice to finish on a round number) and the mid-point in my counties challenge (24 marathons completed out of 48).
So I really needed to do one last race and this seemed like the obvious one.

So - ten laps of a Grand Prix race track.  Let's do this!

Somewhat inauspiciously, my Garmin decided to die the night before the race and refused to come back to life, so I had to use Strava on my phone to do the recording.  I was a bit worried my phone would get a bit stressed out doing that AND taking pictures AND playing music so I tried to keep the other stuff to a minimum, also each lap was surprisingly similar to the one before (!) hence there aren't as many photos as usual.

It was an extremely cold day, even by December's standards, and I had to de-ice the car before setting off.  It was a short journey and I arrived about 50 minutes before the race started.  I parked and went to fetch my number from the race start area.  It was pretty small so I wandered over to the race track first to take a look: 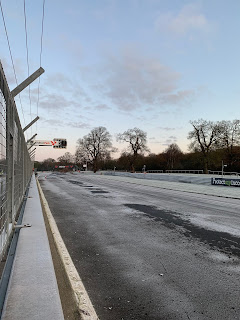 Hmm.  Health and safety?  That is the actual surface the 2000-odd runners are going to be running on.  Oh well!  I wasn't overly concerned as my trainers have good grip.  I wander over and collect my number from some very cold volunteers and bump into a nice man called Matt, who asks if I've ever done a marathon before.  I explain...  We have a chat and he asks for my details because he thought my story was sufficiently interesting to be featured in their newsletter - fame at last! 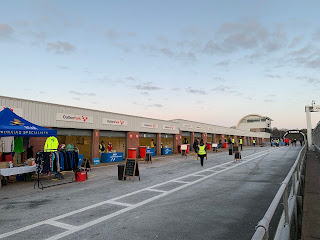 I head back out to find the loos and discover there is a whole warm cafe full of tea and clean toilets on the other side of the car park.  I lurk here for the next half an hour, feeling quite chilled, before returning to the start.  They announce that the course is marked in descending order e.g. "26 miles to go, 25 miles to go, 24 miles to go" which is strange and confusing.

The race begins.  It is a beautiful, crisp winter's day, and there's frost on the grass making the track look stunning: 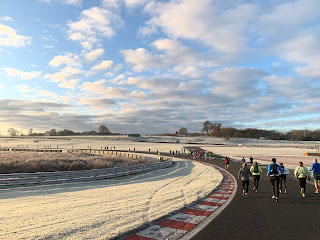 The course curves around corners and the runners soon stretch out onto the horizon.  After ten minutes or so, it loops back on itself so you can see the fastest runners coming back towards you. 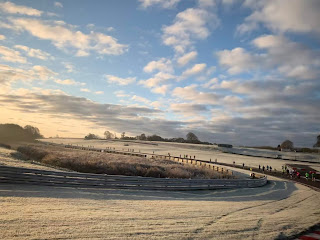 There was still ice on the tarmac in places, but some bits had been gritted and others were rapidly melting with the footfall.  The signs showing how much distance there was left were deeply confusing - as you would obviously see all 26 signs on every loop of the circuit, so you also needed to remember where you were up to for these to make any sense at all.  Maths was an important part of this race - if you knew you'd done 3 laps, and each lap was 2.62 miles, you could work out roughly how far you'd gone (7 and a bit miles) and then deduct that from 26 (19 and a bit... or is it 18 and a bit) to try and work out what signs applied to you (so you're looking for the '18 miles to go' sign.  Or possibly 17)...

Although my watch was in kilometers, so then I just needed to convert that into miles, 10 km is 6 miles, so six threes are 18 miles so that makes 30km to go... and so on and so on.  This kept me busy for most of the race. 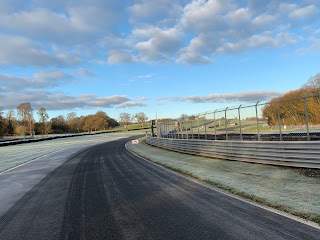 I didn't realise when I signed up but race tracks are not completely flat ... not sure how I never knew that.  It turns out there were 2 hills - a smallish hill and a biggish hill.  These started out runnable but became increasingly problematic!  There was also one section with a really hideous camber - I wouldn't fancy driving on that, nevermind running it, and after a few loops I found I was getting weird pains in my calves. 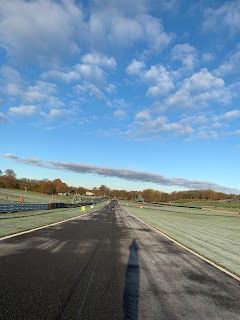 I ran behind this little group for much of the race.  They are just approaching the biggish hill in this picture, this must've been taken on around loop 4 or 5.  They were a bit faster than me, but the tall man in the middle got horrendous cramp on loop 8 and I overtook them.  I saw them at the end with medals so he must've overcome it, but it looked incredibly painful - kudos to him for sticking it out. 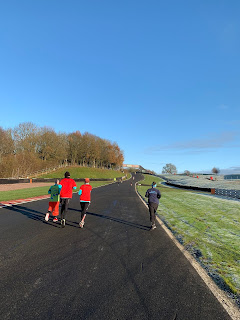 As the day progressed, it got gradually warmer.  There were multiple races running simultaneously so gradually we were joined by the 20 milers, half marathoners, 10k'ers and 5k'ers.  There was a band playing on one part of the course.  There was a single water station, offering plastic bottles of water to runners.  I was loathe to take them, but as I was wearing my rucksack and not my vest I did need to.  I asked the volunteers if I could leave the bottle in a specific spot and keep reusing the same one - they said yes, then remembered me and retrieved my bottle and handed it to me on each loop.  I named it, "Alice's special princess bottle" and thanked the volunteers profusely each time. 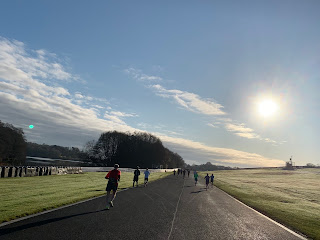 Here's a photo of the dreaded camber!  It doesn't look that bad but it really was horrible, I remember thinking cars weren't supposed to cross the white line but you were almost being tipped into the ditch as you went round.  By the halfway point my calf was really quite sore.  I was also very, very, very bored. 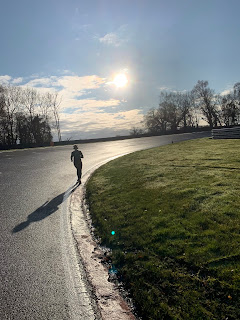 By lunchtime, all the ice had melted.  I met a girl called Kate at the water station and we got talking about how surprisingly hard/boring it was.  I mentioned I'd run a six lap race a few weeks before and she asked which one - I said Durham - turns out she'd run that one as well - what are the chances?!

We ran together for half a lap or so which was nice as I hadn't had much company, however we soon realised that I was a lap ahead of her and she needed to slow down a bit.  On another race I might've slowed down with her but I was keen to get this one finished as soon as possible. I got my speaker out for the last couple of laps, which helped, as there were increasingly fewer and fewer people left out on the track.  Even the band had packed up and gone home! 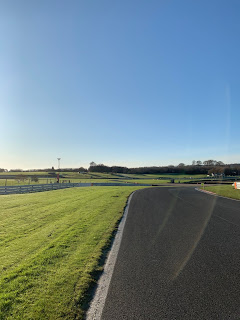 It's a rare day I stop to take a photo of a mile marker, but I was just soooo glad to see this sign (for the 10th time).  My legs were aching, I was really bored and I couldn't wait to have a cup of tea!  Although I have done quite a few road marathons lately, they're often in glorious countryside which distracts from all the ... road.  I was genuinely surprised at how tough I found this race considering it was just loops. 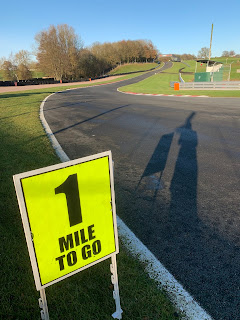 Here's a finish line picture I wasn't even aware was being taken.  I don't look all that happy!  The race provided free photos (always nice) so that's where this came from: 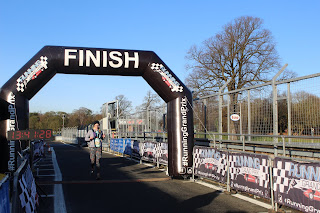 And here I am looking slightly happier now I have a medal round my neck!  There was a decent goody bag and a van in the car park selling tea, so I didn't hang around for long at the end.  I did some stretches (rare for me, but I was sooo stiff I thought I might seize up in the car!) 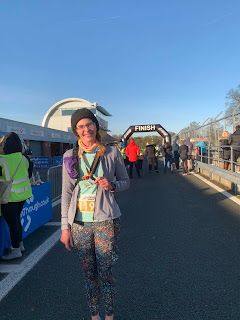 I met a guy in the car park who told me this was his first marathon - yuk!  I told him his next one would be a lot easier!  Here's the elevation profile, actually not that much total height but all grouped into that one steepish hill repeated 10 times.  I think I'd rather just climb a single 300m hill... 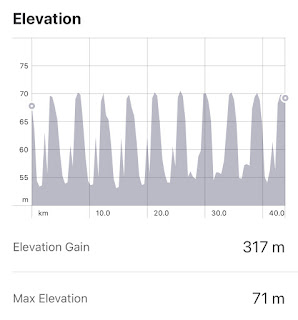 My Apple Watch battled through it, managing to not run out of battery by some miracle and rewarding me with a dazzling array of badges:

And here's the really quite nice medal you get at the end.  My eventual finish time was 4:40:17 which wasn't bad considering.  Definitely not a race to underestimate - much harder than it looks! 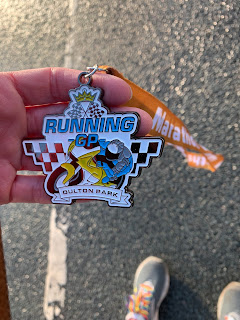