There's not a huge amount of marathons in County Durham and it's also quite far away, so I'd had my eye on this race since the spring. After much careful organising, I booked a cheap hotel and went down the day before.  Iz, my daughter, was going to an open day in Leicester and came up by train later that day, unfortunately delayed by flooding.  We had dinner and stayed in a hotel in a place just outside Durham called Brandon.  The girl who checked us in advised it would be cheaper to leave the car at the hotel and get a taxi to Durham in the morning, and there was even a guy there (Barney) who ran a taxi firm - sorted.

The next morning we had a great breakfast and then got into Barney's Taxi.  Unfortunately, Barney turned out to be a bit of a con artist and the meter was already up to £12 before we'd even arrived.  In the end I got him to turn around and take us back, paid him £25 for taking us absolutely nowhere (!) and then drove into Durham and found free parking not far from the venue.  Sigh.  I arrived stressed and flustered with little time to spare, ditched my bag, got my number and headed to the start line.  Meanwhile, Iz headed off into town to do some drawing.  There was just time for a quick selfie: 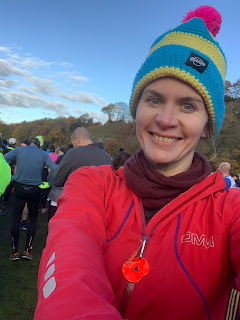 The race began on time at 9:30.  There were 450 people there and the race was loops of a course, which had been changed at the last minute to avoid a flooded section that was deemed unsafe.  The marathon had been advertised as 7 loops of a 3.8 mile course.  Boring maybe, but oh well. 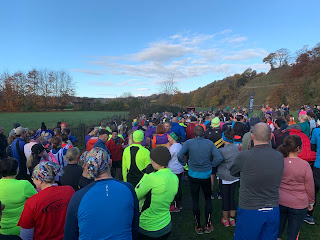 We all set off together, and shortly came to the first bridge over the river.  There was a tight right hand turn and then we continued on the other side of the river.  I could still see people behind on the other bank, and rowers in the river.  It was a cold and crisp day and perfect marathon weather. 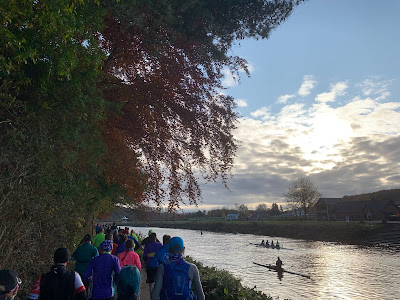 This was taken a bit later on, after a slightly wooded section, where you came back out.  The sun was out but it was still pretty nippy and I was glad I had gloves and a couple of layers on. 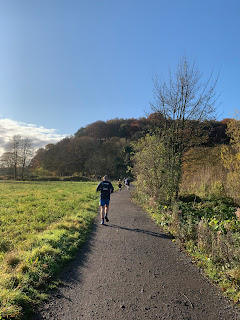 After this there was an out-and-back section, followed by another bridge crossing.  This bridge was really icy, slippery and LOUD, especially when bikes crossed it.  It was my least favourite part of the course.  Later, a runner told me they run across it at Parkrun - the noise must be horrendous! 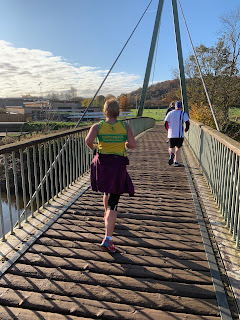 After the bridge you ran alongside the river again  - this was probably the prettiest section: 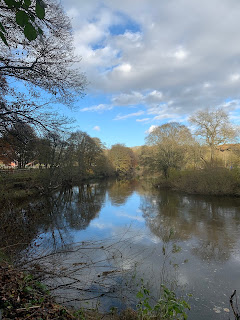 After that the route goes through some trees, then across a car park, then does a loop around a field before coming back into the start from the opposite direction.  These pictures weren't all taken on the same loop which is why the weather keeps changing! 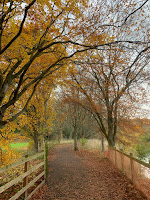 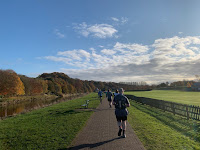 It took me the whole of the first loop to stop stressing about my transport to the start, and by the time two loops were done I was starting to settle in.  However my watch was saying 2 loops was only 11km, which suggested 7 loops weren't going to be enough (7x5.5km= 38.5km - it needs to be 42.2km to be a marathon).  This was a bit annoying as mentally I'd prepared myself for seven and didn't want to have to do an extra one.

The interesting bit of this race was the 2 minute silence at 11am to honour people who have died in wars.  Personally, I'm not a big fan of wars, but I understand it's important to those who've lost relatives so I always try to be respectful.  The race was stopped at 11am by people blowing airhorns all around the course and we all stood still in silence for 2 minutes.  Unfortunately the people playing rugby in the field behind that hedge didn't stop, so it was punctuated by their shouting.  Oh well.  It's the thought that counts, right?
The race organisers deducted 2 minutes from your eventual finish time to compensate you for the stop, which is kind of sweet but (in my case) totally unnecessary as I wasn't bothered about my time anyway. 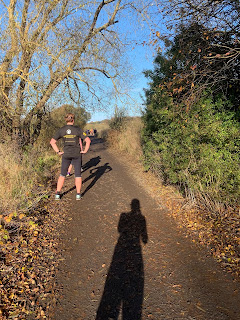 The other thing the race organisers did was put posters up around the course with various facts and quotes about war.  (Click on the photos to make them bigger)

These meant I spent quite a lot of time thinking about war during the race.  It's pretty crazy how many people died in WW1, I mean I knew it was a lot but that's insane, especially compared to how many have died since*.  I thought the quote was interesting, but discussing it later with Iz, she was unconvinced.   "What if Hitler had just shot everyone else though?  Then we'd all be under Hitler!" Good point, well made.

*I have not fact-checked these statistics and like all statistics, a lot depends on how they were gathered and whether they're comparable.  I notice they don't quote their sources.... 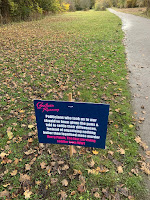 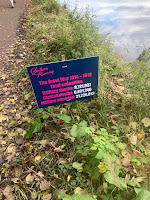 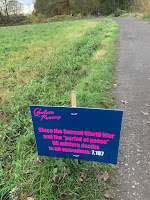 The race continued.  I shed a layer of clothing (luckily my bag was very close to the race start), I went to the toilet (not at all close to the race start, costing me way more than 2 minutes), I ate snacks from the extremely well equipped snack table.   It was a cupless event so you just left your cup on the table and when you arrived back at the start, you could fill your cup with any of the drinks provided.  This worked really well and is a great way to cut down on plastic waste.  I also met a woman at the drinks station who recognised my Penny Lane Striders top and said, "Are you from Liverpool?  My brother in law is in your club!" Later I saw her husband running and he called out, "Go Penny Lane!" Aww! 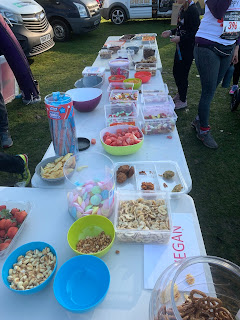 I regretted having forgotten to pack my headphones as loops of the same course get a bit boring after a while.  Until the fifth lap, where I met these two: Andy and Neil.  Neil was a physio and I think he might have been Andy's coach; Andy was attempting Couch to 50k.  Yes you read it correctly - 50k!  Having done C25K earlier this year, he'd just kept on running and today was attempting a new 'furthest distance'.  There was a time limit of 7 hours, and I hoped to finish my marathon in under 5, so this seemed quite achievable.  On discussing with them, they felt the marathon would be eight laps and the 50k ultra would be nine laps, which seemed believable. 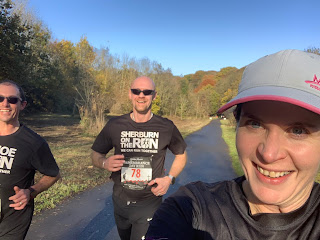 We ran the whole lap together, I told them about my challenge, they told me about their running, it was fun and the lap whizzed by.  When we finished the loop, I grabbed some drink and fetched my speaker to jazz up the next lap, but Andy was stretching as he seemed to be having some pain so I said I'd catch up with them later.  The out-and-back sections meant I saw them several more times. 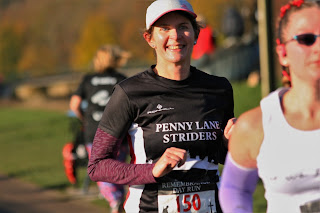 The speaker kept me entertained on lap 6 and I passed a few runners who seemed to be enjoying the blasting of Abba, A-ha and the Eurythmics.  There were a lot of young people on the course who were on their way back from rugby, rowing etc who also got really into it, singing and dancing or mouthing the words as I went past them which raised a smile.  On Lap 7 I left the speaker behind as it's heavy! But I picked it up again for the final lap: 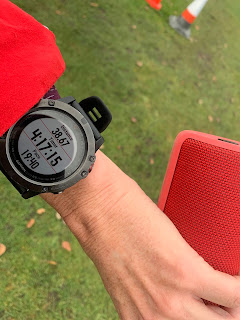 I had only got a little way when I spotted Iz sitting on a bench by the river.  I skidded to stop, gave her a hug and told her I had one loop left and that she could meet me at the finish line in 20 minutes.  I set off with a spring in my step, and she later showed me this picture she took of me from the other side of the river.  She said she could still clearly hear my music even when I was over there ... haha! 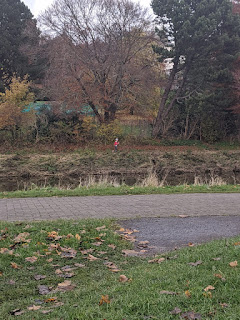 The last lap went pretty quickly and it wasn't long before I was at the finish line.  There was a lovely medal and a goody bag with actual goodies in it: Coke, chocolate, Mini cheddars, Haribo.  My kind of goody bag!  I saw Andy and Neil just setting off for another lap (I accidentally said 'only one more to go!' to them before they corrected me 'two' - whoops!  somehow I must've managed to lap them as we were on the same lap when we ran together).  Unfortunately neither of them are showing up in the results so I'm not quite sure how that story ended... 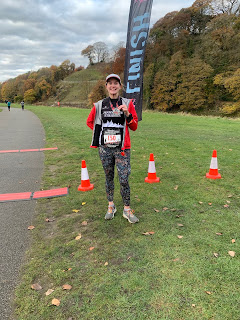 We also had a nice photo together - note how she is wearing my coat as she FORGOT TO BRING A COAT, it was 5 degrees in the morning, ahhhh teenagers! 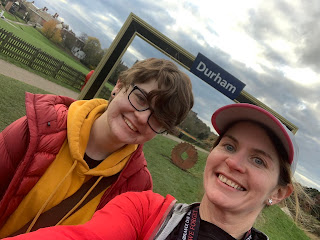 And that was it.  The journey home was awful, less said about that the better, so let's end with one of the three lovely drawings Iz did during her day in Durham.  Isn't she talented? 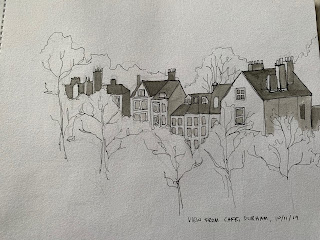