Tyne & Wear - it's been a long time coming.  The last of the really northern counties, this is my fourth attempt due to repeated Covid cancellations.  I was booked to do a race here in November but (deeply annoyingly) received the following email a week before the race:

"Thanks for entering the Run Before Christmas.  As well as having to postpone this event from 2020, we have also had to move the event to Durham as Sunderland Council are not permitting event organisers with no previous events in the region to hold an event in 2021.  We did email everyone when we decided to change venues towards the end of October.  However, there are always some email addresses where the emails can end up in junk or sometimes do not get through filters.  If you are not aware of this change, please be aware we have had to move this event to Durham City..."

Sadly too late for me to cancel our non-refundable hotel and I'd already done County Durham...  Not sure I really believe the "it went into spam" excuse as I checked my spam and there was no sign of it - I'd also had plenty of other emails from them before.  Hmm.

So I hunted for another and found this tiny low key race held by North East Marathon Club.  £19 to enter - surely the cheapest marathon of all the counties? - and falling on a Bank Holiday so I didn't even have to use any annual leave.  I duly shifted all my Christmas plans to facilitate it, the hotel let us rebook and Ben and I headed off straight from my parents' house post-Christmas excesses.

We stopped for lunch at Willo and Gordy's in Leeds and had delicious tomato soup and cheese scones and then carried on for another hour and a half through the fog. 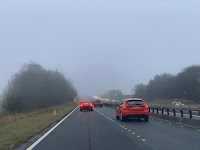 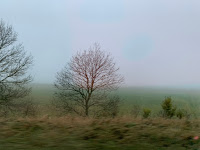 Ben went to university in Newcastle and hasn't been back for a couple of decades so we were looking forward to exploring a bit of the city. On the way we stopped to see the Angel of the North: 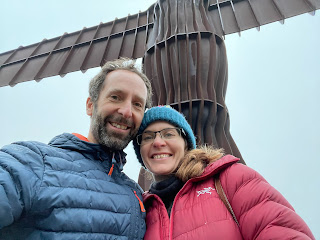 After checking in at our hotel, we went for a wander past the university, into town and along the river front.  We had Thai for dinner as we both needed a rest from rich Christmas food and watched the footie fans making their way to the stadium for the Newcastle v Man United game. 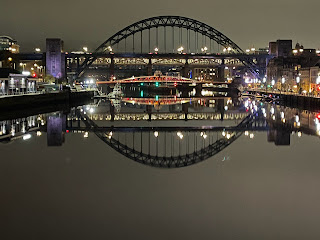 The next morning we arrived at the start with a whole 15 minutes to spare.  Registration was outdoors (nicely Covid friendly) though it was drizzling with rain. 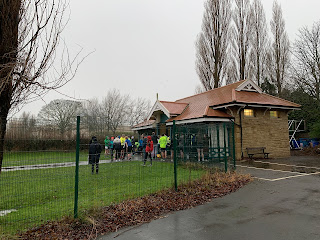 I collected my number and handed in some tins and stuff for the food bank collection.  Ben and I got chatting to a nice guy called Matt who was planning on doing the full six hours as training for The Wall next year.  Soon it was time for the race briefing and then we were off! 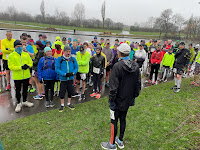 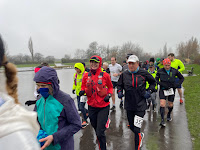 It was a bit misty and drizzly and Ben took this atmospheric photo as I disappeared into the distance: 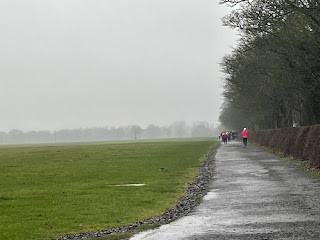 Once I'd settled into a comfortable pace I found myself next to Matt once again and we ran a good chunk of the first lap together.  There was one point where lots of people ahead of us went straight on and lots of people behind us shouted "TURN LEFT"!  It was a bit confusing as all the chalk markings had washed off but in the end we went with the "turn left" people, which was the correct thing to do.  Shortly after this there was a right turn, just where the lamp post is in this photo, and suddenly there was a savage headwind.  He explained that  this was the case all year round because this bit of the Town Moor is very exposed, which makes sense.  This only got worse as the marathon wore on... 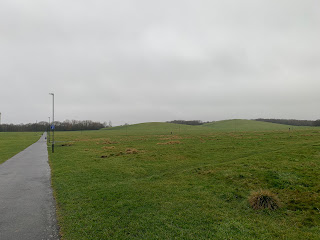 By the second lap I'd lost Matt and was running behind a group of women who were happily chatting and maintaining a 6 min/km pace.  I knew I shouldn't go faster that this so I just pottered along behind them. 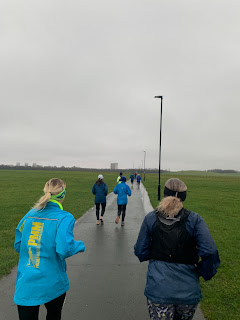 It was still pretty grey and overcast although not as cold as I thought it might be. 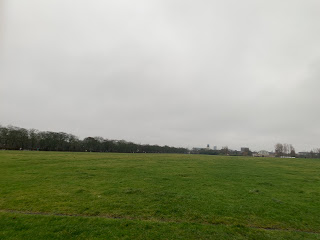 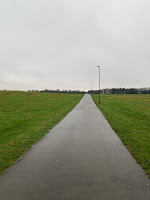 I had a little moment of joy on the second lap where everything was right with the world.  It always feels like a treat to find a race this close to Christmas, and I was so pleased to finally be getting this one done.  I felt good and I was enjoying myself. At the start of the third loop I saw Ben and he took a couple of pictures of me as I ran round the little lake by the start/finish. 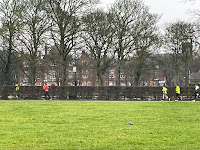 Around here the group of women I'd been following decided to ease off the pace.  Within a few minutes I was ahead of them.  After a short while I asked the lady next to me if she was doing the marathon (I knew the turn off was at a blue gate, but as there were about five, I was hoping she might have some insider info).  She was called Louise, and she was only planning on doing 10 miles.  We watched a dog run in front of a bike while its owner struggled to get it to recall - then watched it stop for a poo in the middle of the pavement.  We got chatting - she has a whippet called Eddie and we talked about dogs for a while, then work, then races and so on.  She's building her mileage back up as she's doing London marathon this year - so we chatted about nutrition and pacing for a while. She decided to do another loop and carry on up to half marathon, which was great for me as I got another loop of her company! 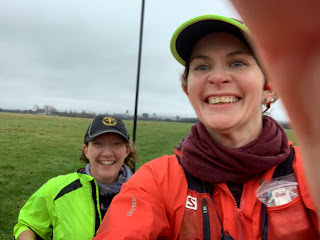 I couldn't find her instagram page (even though she told me what it was called - sigh) so if you see this Louise please leave me a comment so I can find you!

There were some Explorer Scouts helping with the marshalling and they were very enthusiastic.  The girl in the pink coat was particularly enthusiastic and made me laugh a few times with her flamboyant pointing.  I knew they were selling tea and cake at the end and I was already looking forward to it! 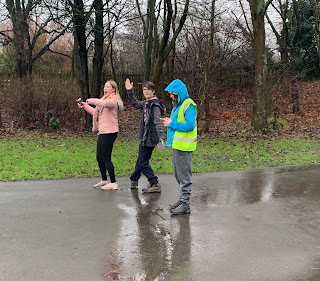 The fifth lap was the most dull.  I'd lost my running buddy and probably hadn't eaten enough so I forced down a mini mince pie stolen from the hotel buffet breakfast and put on my "London marathon 80's drivel" playlist.  I consoled myself by singing 'Nothing's Going To Stop Us Now' at the top of my voice into the wind.  Once I passed the horrifically windy section, there was the nice sheltered bit with trees either side.  This time I noticed a signpost to Freeman Hospital (famous to me because it does heart and lung transplants) which I'd not noticed on all the previous laps. 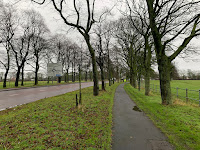 At the top corner of the course there was a view back over Newcastle, now starting to get lost in the mist and drizzle again: 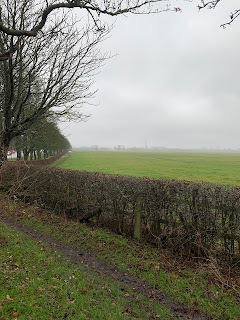 Then a long section along a road.  Here you can see a guy in a yellow vest who has just lapped me for the second time - there were some quick runners out today.  Ben told me later the fastest man finished in 3 hours 4 minutes and he'd never run a marathon before!  Definitely not ideal conditions today and not flat either. 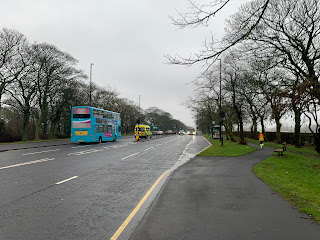 At the end of the fifth lap I planned to get Coke from the aid station but to my disappointment they'd run out.  I was only at 25km and felt a bit gypped by all the half runners who'd drunk all the Coke and then finished, damn them!  Anyway I rang Ben who very kindly agreed to get me some and meet me after the next lap.  The next lap passed uneventfully and when I returned Ben was waiting as promised :) 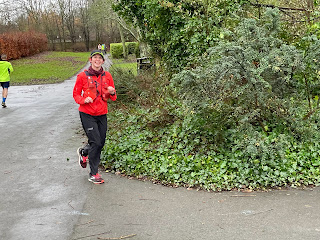 I had some Coke and then Ben ran with me round the little lake.  As we came out by the brewery on the far side of the lake, we just caught a bride going in to her wedding! This is the 90th time I've run the marathon distance and the first time I've seen a mid-race wedding.  Got to love that! 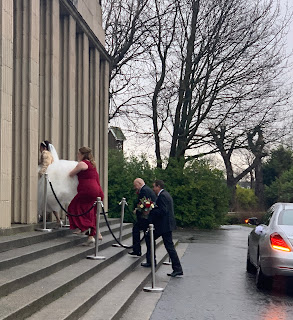 I carried on to lap 7 and Ben went off to get the car.  About a third of the way along the lap, someone let me through a gate and we got talking.  Her name was Sarah and she'd lived in Newcastle ever since finishing university.  I told her about my challenge and how this race, despite being cheap to enter, had ended up being pretty expensive once you took into account accommodation, food, petrol etc.  We had a really lovely chat and despite saying she was going to walk the uphill windy section, ran it with me.  I asked her about where the blue gate was to turn around for the marathon was and after some patient explanation, finally understood what she meant.  We ran the rest of the race together and finished virtually exactly on 42.2km - thanks Sarah! 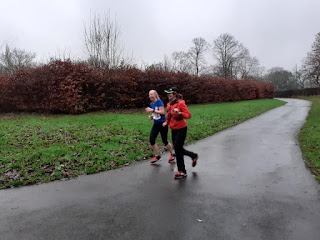 I only realised after we finished that we had the same trainers!

At the end I got my medal, told them my finish time (they didn't want someone to have to stand around for six hours in the drizzly rain, which quite frankly I couldn't blame them for), then had two cups of tea and some Christmas cake from the Explorers.  I drastically overpaid them because they were fundraising for the Jamboree which apparently costs £4200 per person - it's in South Korea next year. 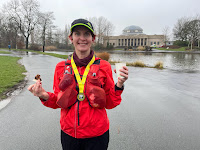 We walked back to the car and I did some stretches in an underpass to avoid the rain.  I got changed in the most inelegant way possible inside the car (and I had to literally take off everything because I was soaked).  Ben said nobody could see in...hmm.  Most of the population of Newcastle has now seen my naked arse.  The end.