Another day, another Covid-delayed marathon.  This one was originally going to be in Rayne in April but that was cancelled so I switched onto this one for a day out by the seaside.  It would've been a pretty horrific drive from Liverpool to Clacton-on-Sea (536 mile round trip) but I came up with an alternative plan which involved staying at my parents' house and meeting Ben just off the M25 at 7:45am.

Hate to spoiler you but here I am at the end :) 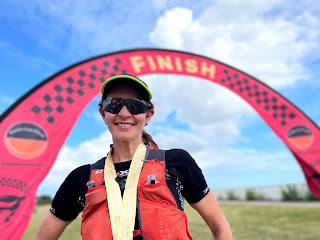 The drive down was uneventful and we arrived with 20 minutes to spare.  I had time to collect my race number, go to the loo, check out the aid station and listen to the race briefing.  Here I am, listening: 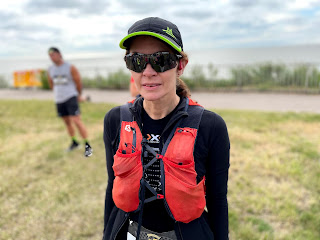 Apparently the course had been changed/shortened as part of the prom was closed, but having not looked at the original route this made no difference to me.  It was now a 5.3km loop, passing the single aid station each time.  I would need 8 loops to complete the marathon.
The race started and we all set off.  The front runner, who was dressed in shorts and a vest a la 118 118,  accidentally took a wrong turning early on and disappeared, never to be seen again (by me) - oops.  I stayed resolutely mid-pack which meant the turning was spectacularly obvious.  On the way back along the prom there were multiple brightly coloured beach huts, and by 9:45 the first of their owners were already setting up camp for the day. 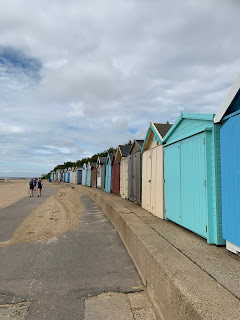 I was amazed at how quiet and pretty the beaches were.  There were several, separated by sea defences and rocks, all sandy and shallow and lovely.  The forecast was for it to be overcast with moderate winds until 2pm when it was going to chuck it down with rain.  I hoped to be finished by then. 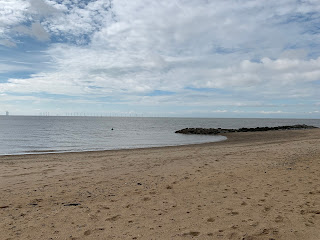 I didn't think I'd ever been to Essex before (although subsequent googling has identified that Stanstead Airport is in Essex).  I certainly hadn't been to Clacton-on-Sea before.  I got chatting on the first loop to a guy called Julian who was doing his second marathon (technically third, but he didn't include the one he'd done 15 years ago).  After a while, he let me go as I was going a bit faster than his target pace.  I was meant to be doing an easy run but felt quite comfortable so I kept going.  I saw Ben once or twice on each loop as he could hop between the lower beachside path and the higher cliffside path quite easily.  He was going to join me for a couple of loops later on. 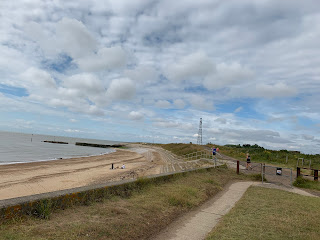 On the second loop, I got talking to a woman who had had Covid in February and was just building up her distance again.  She'd previously been a marathon runner, chasing PBs, but Covid had hit her hard and she was just doing two loops today.  It really made me appreciate how lucky I've been to avoid catching Covid all this time - as I would find it soooooo frustrating not to be able to run.  She was very patient and stoic about it, making the most of what she could do - I'm not sure I would have managed it with such magnanimity.
This was the turnaround point, which featured a short, steepish hill.  I've always said that if you'd walk up a hill on the last lap, you should walk it on the first lap too.  I duly walked up this hill on every circuit, using it as a snack break each time. 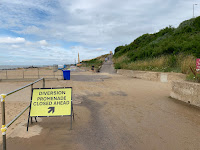 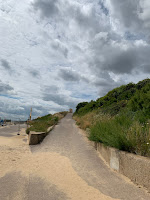 By the third lap it was already significantly warmer and sunnier than advertised.  I rolled up my leggings and when I saw Ben at the aid station, he was brandishing a bottle of sun cream.  I protested, "what about my sun tan?" but he insisted on slathering my arms and neck.  When he threatened to put it on my legs too, I skipped away from him, squealing and laughing. 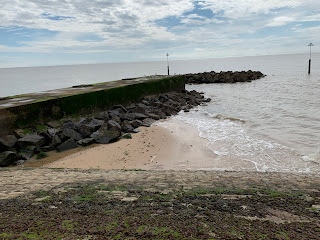 On the fourth loop I got chatting to a guy who was from Braintree.  He asked if I'd done a Hare & Tortoise event before and when I said I hadn't, he told me that he used to do other little road races locally but now he only does their events because they're so great.  Always lovely to hear people sing the praises of their local races and Hare & Tortoise did seem really good.  They seemed like the kind of people that would have awesome homemade cake at their aid stations in non-Covid times, and that's definitely the kind of race I like.  The guy was having a few hamstring issues so decided to call it a day at 16 miles.  Unfortunately I didn't ask him his name. 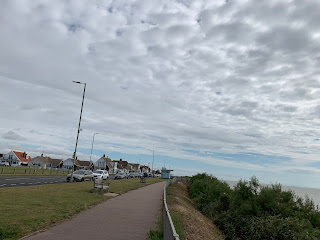 On the fifth loop, Ben joined me and I got to show him the rest of the route which he hadn't yet seen.  This was the other turnaround point (beyond the puddle there's another slope and you double back on yourself and run along the top).  There was a noticeable headwind as soon as you turned the corner but it was quite refreshing as the other direction was becoming increasingly warm. 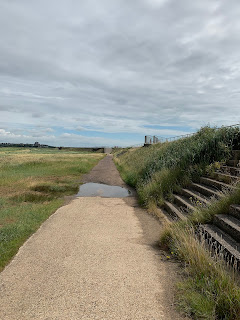 The beach was starting to look a bit like Barbados and although the section by the beach huts was definitely busier, it was still REALLY quiet considering it was a sunny weekend and everyone's meant to be having a staycation this year.  So if you want a nice beach holiday - try Clacton! 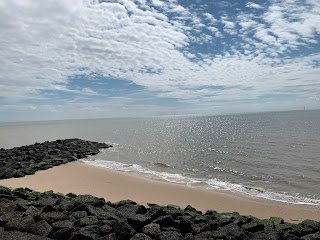 Ben took this pic of me as I came into the aid station.  It had all the things I like - Coke, mini cheddars, pieces of banana and watermelon, sugary treats. 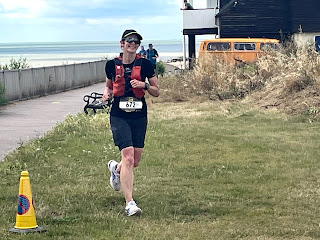 Ben continued round another two laps with me, chatting and keeping me company.  As we started his third lap, he commented that if he got to 16k that would be his longest ever run!
On the final lap I put my headphones on for the first time this race as I was getting very fed up with the headwind (it wasn't the worst I've ever experienced - if you've been to Liverpool/Crosby you'll know what I mean - but it was probably the worst I've had in a race situation).  Especially on a loop where you know even when you get away, it's coming back...  I put on a Spotify playlist and it randomly selected "Seaside" by The Kooks which seemed very appropriate! 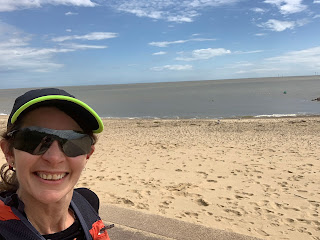 On the final loop I saw this tent which had appeared on the beach.  On the way down, Ben had informed me that Clacton has the dubious honour of being the only English constituency to have returned a UKIP MP.  The tent was blowing around like a Weeble due to the aforementioned headwind. 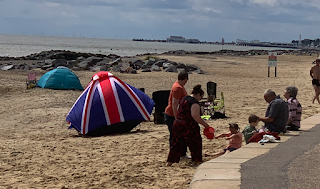 The final lap was gloriously sunny.  I was starting to feel quite tired but after I turned the final corner I could see I was likely to finish in under 4:30.  This is pretty respectable (especially as I'd been taking it easy). 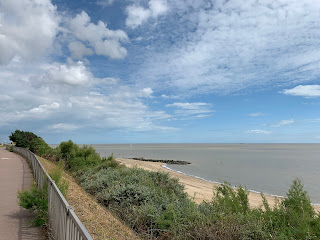 Unfortunately, I realised as the end got closer that actually I might not quite make it.  I realised at 4 hours 28 minutes that I was going to have to get a move on and upped my pace substantially.  By the time I crossed the finish line I was full blown sprinting.  I got across the line and stopped my watch.

The next couple of minutes mostly involved trying to get my breath back interspersed with one word answers to Ben and the friendly race director and crew.  I drank some squash and Ben took some pictures and I chatted to them a bit about my challenge. 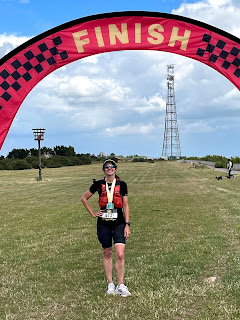 They gave me a goody bag which contained ACTUAL goodies - an easy way to make me happy! 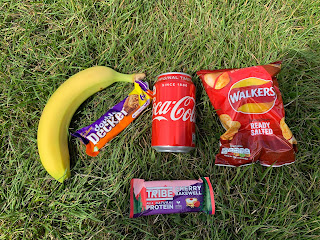 The medal was lovely - the girl who gave it me explained the yellow ribbon was meant to represent the sand.  There were a further 3 races in the series of varying lengths and each had a different coloured beach hut medal.  Cute. 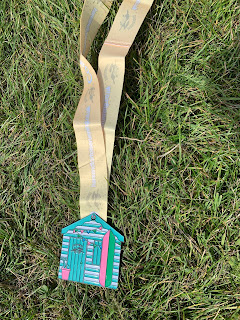 Essex was the last race I had to complete in East Anglia so that's a huge chunk of eastern England finished now.  So nice to be making progress again at last!
at July 31, 2021