I booked this marathon last year with absolutely no idea that by the time I ran it, I'd be living here.  I love Liverpool, always have, and I thought it would be a good excuse to visit.  As it turns out, I now live 5 minutes walk from the start line, so I had the greatest ever pre-marathon lie-in especially as the race didn't start until 10am - luxury!

It was a gorgeous day for it, all blue skies and sunshine.  I'd decided to dispense with the age-old wisdom of not wearing new kit on the day of a marathon and try out my beautiful new pink Hoka trainers.  I'd worn them once, for a 5k on Wednesday, and they felt alright.... what could possibly go wrong, right? 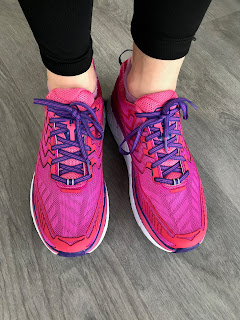 The sheer numbers of people made getting to the start line a bit of an effort.  For reasons unknown, the half marathon went off first so we had to walk round a few thousand people corralled for that, then once in the right place, the race was late starting.  I finally crossed the start line at 10.20am.

The whole race was a glorious tour of Liverpool landmarks.  It struck me later that you'd never normally see all the landmarks in one go like this, at least not as a resident.  It makes me so proud to call Liverpool my home, I constantly go on about this but I've wanted to live here all my life and it is a never-ending source of joy.  The people are so warm, the skies are so huge, there's so much fun stuff to do and see.  There's beaches within 20 minutes, loads of lovely parks and it's nestled between north Wales, the Lakes and the Peaks.  I've got the best job I've ever had and I live in an absolutely beautiful flat with a stunning view over the waterfront.  Lucky doesn't even begin to cover it.

The marathon started at the Albert Dock, weaving down past the Pier Head and the Liver Building and the Beatles statues, up past Superlambanana and through town.  Then it headed out to Goodison Park and Anfield and Stanley Park.  I knew this was part of the route and had commented to Ian the night before that I'd never actually set eyes on Anfield before.  He's an Evertonian and I've become an honorary one by default.

When I got to Anfield, to my horror the race didn't just go past it, I had to actually go in through the gates and then through the stadium, I could see the pitch and everything.  People were taking detours to get a selfie (!)  I steadfastly kept my sunglasses on and bombed through as quick as I could.  Ian had some suggestions afterwards for what I might have done whilst I was there that are unmentionable ;)

The race ran through the university and had lovely views across the whole of Liverpool as we headed back down into town.  Past St George's Hall, then down Stanley Street gay bars and Mathew Street (Cavern Club) before running back along the front.  This was about 11 miles in and Ian was waiting literally right outside our flat.  I stopped briefly to say hello and got him to switch my speaker on.  I was feeling OK, it was warm but not unbearable.  Up to this point I'd just been plodding along.  My intention was to finish under 4:30, but I haven't run a road marathon since Tromsø and all my training has been geared towards ultras so I really wasn't sure if I was capable of it.

But there's something magical about blasting out tunes.   As soon as my speaker was on, I started overtaking people.  Other runners turn and smile, occasionally they comment they're enjoying it too.  It's a totally different experience to wearing headphones, I feel like a little mobile rave and I can't stop smiling.  I started with dance party anthems and I ran all the way up through Chinatown and Upper Parliament Street despite the fact I'd been walking the hills in the first half.  I skipped through the parks, seeing friends from running club and waving madly.  I didn't even mind the detour out to Penny Lane, where a DJ was playing "Penny Lane" on repeat, poor guy, that would drive me totally insane!

From here onwards, the route was familiar as I'd done it in reverse on one of my training runs.  Once I'd got to the 30km mark, I felt confident in keeping up a decent pace as I knew it wasn't too far to go.  My Garmin announces my pace every kilometre over the speaker so that was a good incentive too!  I did quite a few 5:40 min/km's in the last 10k which was quite impressive as my goal was 6:20's.

The final straight along Otterspool Prom is a familiar route for me and I had no difficulty with the final push to the finish.  I overtook soooo many people on this stretch, there was a lot of walking going on and I was feeling fresh and strong.  My Strava fly-by is a joy to watch, as opposed to Kielder where I was overtaken by literally everyone as I took Hollywood rest breaks at aid stations.... lesson has very definitely been learned! 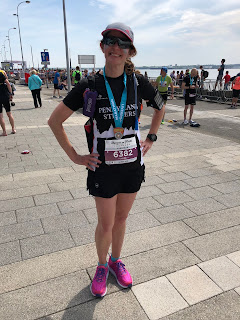 My chip time was 4:15:29.  I was delighted with this, not only because it was significantly faster than I thought but also it was a hot day (Garmin said the average temp was 25 degrees and the max was 28 degrees).  There was also 276 metres of ascent (enough to make a difference) and let's not forget I had run 80-odd kilometres the previous weekend, so I wasn't exactly tapered.   I also wasn't pushing myself to the limit at any point during this race.  Considering I ran Paris and Dublin in 2016 at maximum effort and finished both in 4:12, it suggests I could potentially run a PB at the moment if I actually tried/had the right conditions.   I'm not planning to - my focus is still very much on my ultras.  But I still feel quite proud of myself!  I also ran negative splits for the first time EVER (first half in 2:09, second half in 2:06) woohoo!!! 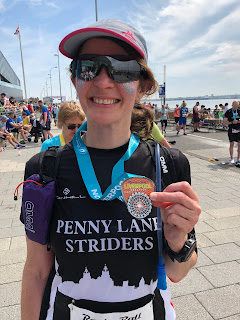 Oh, and as for breaking the age-old rule about not wearing new trainers on race day? 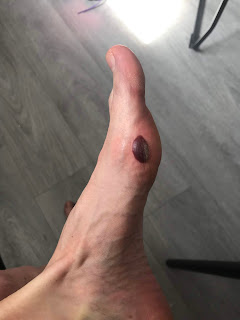